The UK put out its first extreme weather warnings this month, sending some social media commentators into a tizzy and leading them to question the ability of renewable energy systems to cope with periods of little, or no, wind or sun for several days. The unusually hot days in the UK – and extreme weather events around the world – should be the final trigger to ramp up the energy transition and ditch coal, oil and gas for renewables and greater efficiency. However, in the short term, this transformation may require accepting some uncomfortable truths about the need for fossil fuel-based back-up solutions. 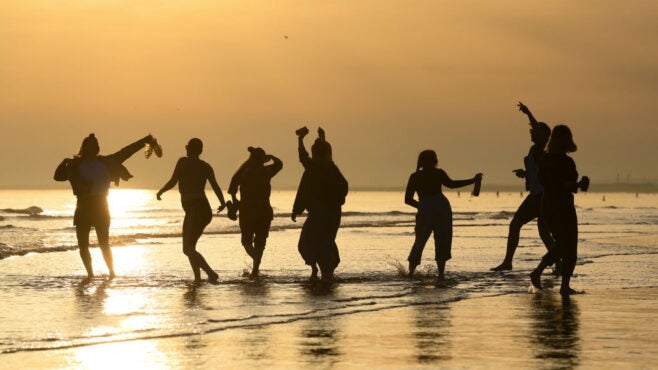 People enjoy the warm weather on Brighton beach on the south coast of the UK in March 2021. (Photo by Mike Hewitt/Getty Images)

At one end of the scale is what the Germans call the kalte Dunkelflaute, when it is cold, dark and cloudy with virtually no wind. The UK, where renewables provide nearly a third of all power, half of this generated by wind energy, suffered a similar situation this month, except it was very hot. In both cases, reliance on high amounts of wind energy can become problematic.

“Those working on power system decarbonisation are well aware of this issue, although fossil fuel industry representatives often make it look as if they don’t understand what is happening,” says Jan Rosenow from the Regulatory Assistance Project, a non-profit aimed at enabling the energy transition. “It is a challenge, but one that can be addressed.”

Building out huge amounts of batteries, where energy can be stored, is often touted as important to solving this issue, but batteries are, at best, only part of the solution.

“Batteries can help with short-term energy storage, but they are not the central answer to keeping the lights on in an energy system based largely on renewables,” says Mike Hogan, Rosenow’s US-based colleague. He cites the energy crisis that unfolded in Texas, US, in February. “Batteries would have helped stabilise the system, but by the second or the third day, they would not have been enough,” says Hogan.

Likewise, while describing himself as a “huge fan of demand-side response”, Hogan argues measures such as plugging in electric cars and buses to deliver power to the grid “would only help to limit the need for other measures, to shave the peaks and to fill the valleys”. Instead, “we need a plan B”, he says.

The need to burn gas

For Hogan, in the short to medium term at least, plan B is to ensure that systems running off high amounts of renewables “include a quantity of gas-fired combustion turbines or even highly efficient gas diesel engines in case of extreme weather when there is little wind and sun, for instance, over several consecutive days”. Some of these technologies “should be capable of burning distillate oil in case of gas system disruptions”, he adds.

In certain places, pumped-storage hydropower can be a solution to store enough energy for a limited number of days, says Hogan, adding that pumped hydro is also topographically limited. And nuclear “could be a small part of the mix for other reasons, but it is not feasible to have nuclear power stations that remain in cold storage to bring online every two to three years”, he comments.

In the longer term, as carbon becomes more constrained, “we need to transition peaking thermal generators to run on zero-carbon hydrogen and other synthetic gases and even biofuels”, he says, acknowledging questions around the sustainable sourcing of biofuels. “Until we come up with a feasible, seasonal, large-scale, probably chemical-based electricity storage option we are reliant on thermal generation that can transition, or be refitted, to run on synthetic fuels,” says Hogan.

A 100% renewable energy system is possible, but "we need flexibility options that manage short-term fluctuating output, especially from wind, and back up longer periods of low wind and solar output", says Christian Redl at Agora Energiewende, a German think tank. "Both short and long-term flexibility options are available," he adds, most notably "demand-side response, pumped-hydro storage, batteries, gas turbines and cross-border grid integration".

Redl says: "We will likely see more gas peaking power plant capacity in our future power systems, but less generation from these plants. New gas plants need to be hydrogen-ready. From a net-zero perspective, this is important."

Chris Rosslowe from UK think tank Ember underlines the inefficiency of producing green hydrogen from renewable electricity and burning it to produce power when needed. "One day renewables and electrolysers may get cheap enough to make it worth it," he says, highlighting analysis from the International Energy Agency (IEA) showing that new gas plants in developed economies need to be running zero-carbon power systems by 2035 to achieve net zero by 2050.

No to capacity markets

To ensure thermal generators are built as part of the energy transition, “capacity markets are a terrible idea”, says Hogan. Only in "very few cases” do capacity markets work; generally they are “inefficient, struggling to differentiate between capacity and capabilities, and innately biased towards large, centralised generation”.

“We are going into a period in the next 15–20 years where there will be uncertainty regarding technology, supply and demand that we haven’t seen since the days when Edison and Tesla were contesting whether the system would be AC or DC.” Mike Hogan, Regulatory Assistance Project

In a paper published in 2012, Hogan expressed concerns about a focus on “resource adequacy", in other words access to enough resources to meet the highest expected level of demand, at the expense of “system quality – the right mix of resource capabilities deployed to ensure that in every moment supply can be balanced with demand”.

Instead, alternatives should be explored, says Hogan. He cites Australia “where a backstop mechanism bolsters confidence there will be adequate investment in resources”. Hogan explains: “The system operator annually assesses resources on a five-year look-ahead basis. If the assessment identifies future resource issues three years ahead, it can oblige retailers to contract for additional supply to meet customer obligations. If at one year out a shortfall remains, the system operator has the authority to contract directly and recover the related costs from the offending retailers.”

Hogan also sees New York’s capacity market as a model that could be replicated. It works on the basis of a biannual auction to ensure retailers have sufficient resource capability for the coming six months to meet expected maximum energy needs.

Such solutions are “good compromises between making sure the market is properly accommodating non-traditional solutions that can be far more cost-effective, while giving the regulator and elected officials confidence someone is keeping an eye on the system and has to the ability do something if needs be,” says Hogan. “There are ways to ensure the market will build the supply resources we need, including peaking generation, without relying on central planners to forecast how much and what kind of generating capacity we will need up to ten years in the future.”

For Hogan, the idea of locking in a centrally planned, predominantly supply-side quantity and portfolio of today’s technology solutions years or even decades into the future makes no sense given the fast-changing nature of the energy market. “We are going into a period in the next 15–20 years where there will be uncertainty regarding technology, supply and demand that we haven’t seen since the days when Edison and Tesla were contesting whether the system would be AC or DC,” he says.

Redl says the increasing need for flexibility provides business opportunities. "Well-designed energy markets can, and do, deliver the price signals needed to invest in flexibility options," he states. "In addition, regulation for strategic reserve capacities can be implemented. These reserves operate fully outside the energy markets and are only activated in case the power market fails to match supply and demand."

Other energy transition experts are more gung-ho about the possibility of energy systems being able to run 100% on renewables without thermal back-up if done correctly. “Wind and solar power supplies are negatively correlated, indicating that wind and solar are complementary in nature and should both be built, where feasible, to reduce output variability arising from installing only one of them,” writes Mark Jacobson from the University of Stanford, US, in a paper from March 2021.

Hogan agrees diversification of energy sources is important. “It is always way better to have a mixture of solar, onshore and offshore wind, batteries and demand-side measures,” he says. Applying the so-called Herfindahl Hirschman Index, normally used to identify the degree of diversification in financial portfolios, to energy, can help achieve this mix. “The more options the better,” says Hogan. “Trying to solve grid reliability simply with thermal generation back-up and synthetic fuels is no better than placing all expectations on the side of demand-side response.”

Nonetheless, a combination of solar and wind is not a panacea for unexpected events such as what happened in Texas in February, he insists. “It would have helped to have more solar, but it would in no way have been enough,” he says.

Another way of managing fluctuations, especially from wind, is to invest more in cross-border interconnections and profit from different wind speeds across Europe, says Redl. This solution "minimises the flexibility challenge significantly and maximises security of supply for all countries".

Rosenow agrees “further integration of energy markets is critical. Pooling clean energy resources across a larger geographical area allows faster decarbonisation of the European power grid, reduces the cost of the transition, and lowers the need for expensive peaking plants". He adds: "While some inroads have been made in this regard, there is still more work to do."

"Back-up firm clean power is the support act, and while important, we have a bit more time to figure that out." Chris Rosslowe, Ember

However, the most immediate focus in the race to decarbonise "has to be on how to accelerate the deployment rate of wind and solar", underlines Ember's Rosslowe. "According to the IEA, this needs to quadruple globally by 2030. Even in the UK, where progress has been relatively good, the rate needs to double on average over the next ten years to meet existing targets, and there would be benefits to going even faster. Back-up firm clean power is the support act, and while important, we have a bit more time to figure that out."

One final issue, which must also be kept at the top of the energy transition agenda, is “energy efficiency, which "matters more than ever for the transition”, says Hogan. “In a decarbonised energy system, energy efficiency should be in first place. In the old days, most of the costs avoided with energy efficiency were operating costs. Now, without energy efficiency we will fully incur all our costs upfront, we will have sunk all our money and forgone the opportunity to avoid unnecessary costs.”

Topics in this article: UK, US
SUBSCRIBED