The EU energy taxation directive dates back to 2003. It sets minimum tax rates for transport and heating fuels, and electricity. It took six years to agree. Its predecessor, the first such EU directive, took five. Ten years ago, the European Commission issued proposals to review the 2003 directive. The timing was perfect: member states were refocusing their economic policies on sustainable growth as they exited from the 2008 financial crisis. In parallel, they were drawing up strategies to meet a European 20% greenhouse gas emission reduction target for 2020.

The energy taxation proposals, which sought to introduce a CO2 component for fuel taxes, could help on both counts, the Commission suggested. Member states could raise taxes on dirty fuels and shift taxes from labour to consumption. The proposals would enter force into 2013 when the third phase of the EU Emission Trading System (ETS) kicked in. The revised energy taxation directive would complement the system by introducing a first-ever price on carbon in sectors such as transport and buildings.

However, the Commission was overly optimistic in its thinking. After repeated delays due to internal fighting by member states, it withdrew the proposal in 2015. “It would be pointless to let EU institutions waste time and energy on proposals which have no chance of being adopted,” said Frans Timmermans, today the Commission’s first executive vice-president in charge of the European Green Deal, then first vice-president for better regulation, in December 2014. “Whenever that is the case, we will think of other, more effective ways to achieve our common objectives.” 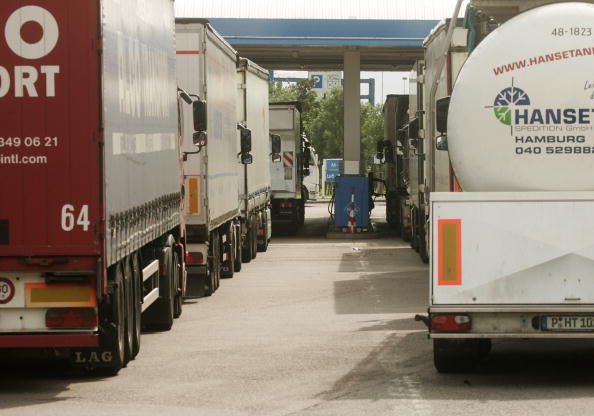 Truck drivers queue to refuel their lorries with diesel in Luxembourg City. Fuel is much cheaper in Luxembourg due to lower taxes. (Photo by Mark Renders/Getty Images)

Fast forward to 2021 and there is a fresh proposal to revise the EU energy taxation directive on the table as part of the Commission’s ‘Fit for 55’ package. In many ways the context is not dissimilar to that of ten years ago: member states are focused on sustainable economy recovery in the wake of a crisis and there are climate targets to plan for nine years away.

Together with proposed reforms to the ETS, the energy taxation plan would extend carbon pricing from 22% to 67% of European greenhouse gas emissions by 2030, calculates the Institute for European Environment Policy. A senior EU official estimated that energy taxation made up 8% of the ‘Fit for 55’ emission reduction effort, but its chances of being adopted are still far from certain.

It would be pointless to let EU institutions waste time and energy on proposals which have no chance of being adopted. Whenever that is the case, we will think of other, more effective ways to achieve our common objectives. Frans Timmermans, European Commission

The biggest obstacle is that, like all taxation proposals, changes to energy taxation have to be unanimously agreed by every member state. In contrast, the European Parliament has no say on tax matters. Diverging national interests typically result in a text riddled with exemptions that leaves national governments pretty much free to do as they please – if they manage to agree at all.

“I think the political climate has changed, but it will still be difficult to reach an agreement,” says Blaine Camilleri, policy officer for fiscal reform and circular economy at NGO the European Environmental Bureau. He worked on the last revision of the directive ten years ago at Malta’s Ministry of Finance. Camilleri believes there is more willingness to compromise and move forward. European heads of state and government have signed off on a review of the energy taxation directive as part of the European Green Deal. They have committed to a 55% emission reduction by 2030 and net zero by 2050. Nonetheless, he remains concerned “the current proposal is watered down and ultimately insufficient to meet our goals”.

Simone Tagliapietra at economic think tank Bruegel agrees the proposal is “highly contentious, notably as some countries will likely consider the measure an encroachment on their sovereignty, as they have in the past”.

Timmermans insists that if member states want to change Commission proposals they need to offer an alternative that still ensures the EU meets its climate goals.

In terms of content, the Commission plans are not exactly the same as last time. Most noticeable is the absence of a plan to introduce a CO2 component for fuel taxes. That job is left to a new ETS for buildings and transport.

Nonetheless, the EU executive is proposing to take the environmental performance of fuels into account in future energy taxation. The Commission divides fuels into four categories, starting with conventional fossil fuels such as diesel and petrol, and “non-sustainable” biofuels such as those linked to deforestation. These would be subject to the highest minimum tax rate of €10.75 ($12.68) per gigajoule (GJ) when used as motor fuel and €0.9/GJ when used for heating.

The next category of rates applies to fuels “which, while fossil-based, can still lend some support to decarbonisation in the short and medium term”. Natural gas, liquid petroleum gas and “non-renewable fuels of non-biological origin”, such as synthetic fuels made with hydrogen derived from natural gas, sit in this group. These fuels would pay two-thirds of the top rate for a “transitional period” of ten years, namely €7.17/GJ when used as motor fuel and €0.6/GJ when used for heating. After that, they pay the top rate.

The third category is for sustainable, but not advanced, biofuels made from sustainably sourced crops. They would pay half the top rate, or a minimum of €5.38/GJ for motor fuel and €0.45/GJ for use in heating.

The lowest minimum rate of €0.15/G is reserved for electricity – regardless of whether it is used for transport or heating – advanced, sustainable biofuels and biogas, and renewable fuels of non-biological origin such as renewable hydrogen. The Commission also proposes to apply the same low rate to low-carbon or blue hydrogen and its derivatives, made from natural gas with carbon capture and storage, for ten years.

The big innovation with all these rates is that they are based on energy content, rather than volume, as was the case until now. Volume-based energy taxation has favoured fossil fuels because they have a higher energy content, meaning fewer litres are required to do the same job as cleaner fuels. The rates would also be indexed to inflation, which they were not before. (The real value of the minimum rate for petrol has decreased by around two-thirds since 2003.)

The other big change in the reform is a proposal to do with away with a whole suite of exemptions, most notably for intra-EU aviation and shipping. A kerosene tax on European flights has been a long-standing ask of NGOs. The reality of needing member state unanimity to make it happen, however, has been an equally long-standing reality check. On 14 July, NGO Transport & Environment argued this is “hard but no longer impossible”. The reform foresees minimum tax rates for kerosene and heavy fuel oil (for ships) increasing to the top rate of €10.75/GJ over a period of ten years, while sustainable alternatives get a minimum rate of zero. Cargo-only flights remain exempt from tax, due to international agreements.

Overall, reactions to the energy taxation reform have been muted, perhaps simply because the sheer size of the ‘Fit for 55’ package has left stakeholders focused on the biggest stories, such as EU ETS reform and the carbon border adjustment mechanism. It could also be that stakeholders have already written off the proposal as a non-starter or have already accepted that it is the future. NGOs and industry groups, such as FuelsEurope, say they are in favour of a CO2 component in energy taxes. For companies, the energy taxation directive is an important part of making the business case for efuel investments.

Tobias Block, head of strategy and content at the eFuel Alliance, which represents more than 140 companies in the efuel value chain, says the impact of the energy taxation directive is “underestimated”. If the price difference between fossil fuels and efuels is €1 a litre, as it is for the top-performing efuels today, the energy taxation proposal could reduce that gap by 45%, he says.

The bottom line, however, is what member states think. Brexit may help. The UK (and Ireland) have traditionally objected to any tax proposal on sovereignty grounds, but past detractors have also included Luxembourg, Germany and Poland. Luxembourg's historic love affair with extremely low fuel taxes could end with former green MEP Claude Turmes, now the country's energy minister. Germany and other countries may be more favourable to radical change given the growing prominence of climate change on the political agenda, reinforced by the recent devastating floods.

Camilleri suggests that while leaving the door open to natural gas as a transition fuel is unfortunate from his perspective, it may make it easier to find a compromise. “For some member states, it is not an option to move away from gas,” claims Alessandro Bartelloni, a director at FuelsEurope.

A huge challenge for the 'Fit for 55 package' as a whole "will be the social impact", says Block. Bartelloni agrees. “We do not see big hurdles [to this energy taxation reform], except for the social aspects,” he says. “What does it mean for low-income households?”

Affordability and fairness play a much bigger role than in previous climate and energy packages. Fear of reigniting the 'gilets jaunes' (yellow vests) movement means the Commission is proposing to allow member states to exempt vulnerable and energy-poor households from taxation on heating fuels and electricity, for example. Unlike the EU ETS, the energy taxation reform also primarily seeks to make clean fuels cheaper rather than conventional fuels more expensive, meaning the financial impact would be felt above all by member states.

Fuel taxes make up 3.5–9% of national revenues, estimates the Commission. Without this reform, those revenues would fall by nearly 32% between 2020 and 2035 due to the changing energy system and decreasing dependency on traditional fuels, it says. With climate targets pending and a public purse that needs refilling after the Covid-19 crisis, EU energy taxation plans could finally stand a chance.