Nuclear power has been dogged since its inception by massive costs, safety fears, chronic project overruns and deep popular scepticism. The 2011 Fukushima disaster in Japan triggered its abandonment by Germany, while France plans to drastically cut its nuclear fleet. Despite this, its proponents continue to tout the technology as a clean energy solution. 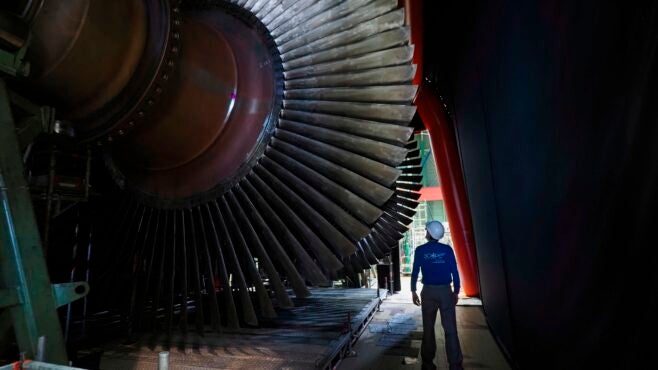 A worker stands by a rotor turbine being repaired in the engine room of a nuclear power plant in central France. (Photo by Guillaume Souvant/AFP via Getty Images)

Indeed, the UK government insisted last week that nuclear will help the country reach its target of becoming a net-zero carbon emitter by 2050. While most clean energy experts believe the writing is on the wall for large-scale nuclear, some argue that the size of the climate problem means investment in small modular reactors could be money well spent, if they can be proven to work.

“These reactors could operate at over 800°C and the high-grade heat could unlock efficient production of hydrogen and synthetic fuels, complementing our investments in carbon capture, utilisation and storage, hydrogen and offshore wind,” said the Ten Point Plan. “Our aim is to build a demonstrator by the early 2030s at the latest to prove the potential of this technology.”

In addition to the 3.2GW Hinkley Point C project, under construction by EDF, the government is running a public consultation for a new large-scale nuclear power plant at Sizewell, which would also be built by the French energy company. Hinkley Point is rarely out of the news for all the wrong reasons, with concerns expressed about the involvement of China General Nuclear Power Group, and over the price that will be paid for power from the plant. Under a contract for difference (CfD), Hinkley Point C will receive £92.50 (in 2012 prices) for every megawatt hour of generation it produces, a figure well above wholesale electricity prices and the CfDs awarded for recent offshore wind projects.

Similar issues are likely to plague any potential large-scale nuclear projects in the UK. “Sizewell is not investable, it doesn’t add up,” says Burke. “Private investment won’t come unless there is confidence in a policy” and the economics for large nuclear don’t stack up.

“The current fleet of EPRs is weird; they don’t behave in the way they should,” says Benjamin Sovacool, Professor of Energy Policy at the University of Sussex, UK. He is referring to the technology used by nuclear power stations such as Flamanville in France and Hinkley Point. “They should follow a positive learning curve, with the next generation getting cheaper and cheaper like wind or solar, but nuclear seems to work counter to that trend.” Instead, recent experience in Europe has seen nuclear plants going massively over budget and over time. In addition, as Sovacool adds, there are huge safety and social acceptability questions surrounding the technology.

“Decarbonising the UK without new nuclear is definitely possible, and potentially preferable,” says Burke’s colleague at E3G Juliet Philipps. “The economics of nuclear have deteriorated over the last 20 years given the remarkable drop in the cost of renewables and flexible energy sources, which threaten the profitability of large, inflexible power stations.”

The UK, like the rest of Europe, can decarbonise without nuclear, agrees Brian Vad Mathiesen, professor at the University of Aalborg in Denmark. In 2016, he jointly authored a paper setting out a scenario for 100% renewable energy in Europe by 2050 based on a highly integrated energy system and sustainable bioenergy. “By integrating the electricity, heating/cooling and transport sectors with one another, it is possible to utilise very large amounts of wind and solar power,” concluded the researchers.

Under the scenario, nuclear is phased out “due to its economic, environmental and security concerns” and its lack of compatibility with a renewable energy system “since it is not very flexible”. The researchers added: “Even if these issues are resolved, there are also major challenges in relation to the safe disposal of nuclear waste and the safety of nuclear power stations.”

Philipps offers a similar vision. “Flexibility is key to ensuring demand generated through a shift to electric vehicles and electric heat pumps can be met through renewable sources, with upgrades to networks and storage,” she says. “This can be achieved by pumping the investment into renewable infrastructure and storage capacity that would have otherwise been tied up in expensive nuclear.”

However, Mike Hogan, senior advisor at the Regulatory Assistance Project, a not-for-profit, suggests the issue is not quite this simple. For him, it is clear “large nuclear generation” is dead. “That paradigm has been broken for a long time,” he says. The technology has “never declined in cost except in places like China and Korea where they somehow manage to build a reactor in a third of the time it takes Europeans to build the same thing. One can draw one’s own conclusions as to why that might be, but I wouldn’t want to live near one,” he says.

However, while no more massive nuclear power stations should be built, “the rush to shut down existing nuclear is a mistake until we are ready to replace substantially all of the production with zero-carbon energy,” says Hogan. “We do know how to operate nuclear plants safely, even if we haven’t done so in all cases. And just because we haven’t always disposed of nuclear waste safely doesn’t mean we can’t. We are facing an existential climate crisis – we have to pick our battles carefully.” He insists old plants should be dealt with “on a case-by-case basis” depending on the country and reactors in question.

Sovacool agrees that if older reactors are safe, there is little reason just to shut them down for the sake of it. “They have paid off their carbon debt and are cheap, often providing electricity for €0.02/0.03 a kilowatt hour [kWh],” he says. “Only energy efficiency can match that; building new wind energy costs around €0.05/kWh.”

This leaves the thorny question of new nuclear. While many clean energy advocates express confidence the world can run off 100% renewables, Hogan is more cautious.

“It is still not clear how to solve a handful of challenges, including what the Germans call ‘kaltedunkelflaute’, when for some extended period of time there is little wind, little sun, it is cold (or hot, if you are in California) and the lack of power can’t be managed by demand side response or existing storage technologies,” he says. “Small-scale nuclear, if it works, might provide some flexibility and could provide a part of the solution, alongside large-scale storage or green hydrogen.”

Hydrogen is the great hope, but it has its issues too, says Hogan. “We know how to make grey hydrogen [from gas] cheaply, but not blue [from gas with carbon capture and storage] or green [from renewables], both of which remain very expensive.” Another issue will be getting green hydrogen, if it can be made cheaply enough and in large enough quantities, from offshore wind plants or other good production places to where it must be consumed, involving a “large and complex investment in transport infrastructure”, says Hogan. Knocking small-scale nuclear on the head now could mean “depriving ourselves of an option just because we are wedded to doing everything with wind and solar”, he states.

Furthermore, the storage technologies needed to meet different types of flexibility largely don’t exist yet, adds Hogan. Experts pushing for large seasonal storage as a solution presume the small modular nuclear option will be expensive, while assuming storage won’t be, he argues. For him, it is vital to distinguish between infrastructure that needs investment now and “critical new technologies to try to commercialise for the future”. Hogan comments: “The idea we can choose to do one or the other, but not both, is simply naïve.”

The development of SMR technology in the UK is being led by Rolls-Royce. The company heads a consortium planning to build 16 SMRs, each generating 440MW of power, with the first operating by 2030.

For Burke this timeline is too slow to help cut emissions in line with the Paris Agreement and the jury is out on whether Rolls-Royce’s plans will ever become reality. “You can’t buy a SMR anywhere,” says Burke. The company would need planning permission and regulatory approval to build nuclear power stations on 16 different sites, which could prove problematic.

Sovacool describes SMRs as the “technology of the future that has already passed” given the timelines involved. “SMRs are in theory designed to take nuclear’s biggest challenges and solve them – but at the moment they are paper reactors,” he says. Whether these technologies have a part to play in the long term in decarbonising our economies, “the true answer is that we don’t know”, says Sovacool.

There are arguments for investing in a diversified clean energy portfolio, but some technologies may cause trade-offs and cannibalise each other’s ability to reduce emissions, he adds.

But Hogan is insistent. “We need to invest in lots of things that may or may not play out. There are people who say we can get to 100% wind and solar, and no one should say anything is impossible, but at the moment we don’t know how to do this. Green hydrogen or small nuclear, or some combination of the two, could help us get to the ultimate goal, which is a zero-carbon economy.”

“I was and remain a big proponent of regionally integrated solutions, but using currently known technologies will only get us about 90% of the way,” he continues. “We are talking about getting all the way, at least in the power grid, by about 2040, if not earlier. There is scepticism about whether small modular reactor technology will be commercially viable and deployable at sufficient scale in that time frame, but there is similar scepticism about other early-stage technologies, even something as seemingly prosaic and commercially viable as ‘improving and expanding the grid’.”

He warns against “sitting here today and drawing arbitrary boundaries around what we should and should not pursue for the next 25 years. We have seen that movie before and it didn’t turn out well.”

With this in mind, he believes the UK government’s decision to invest in SMRs as part of its Ten Point Plan is correct.

“The idea of continuing to spend money to try to commercialise small modular nuclear is a good use of money, because it has the potential to address directly the fatal flaws in the historical large nuclear paradigm,” says Hogan. However, he is equally clear that any spend on nuclear, “cannot be allowed to starve investments in other parts of the strategy”.

“It is too early to foreclose promising options,” concludes Hogan. “We need as many potentially cost-effective options as we can get. That is just reality.”