Increasing energy efficiency will make the journey to net zero easier. If processes use less energy for the same output, fewer solar panels, wind turbines and other sources of energy production will be needed. However, making a business argument for ‘nothing’ remains a hard sell.

“If your company wants to go 100% renewable, instead of installing 10,000m2 of solar PV, you can install just 5,000m2 by making processes twice as energy efficient,” says Nils Borg, director of non-profit the European Council for an Energy Efficient Economy. 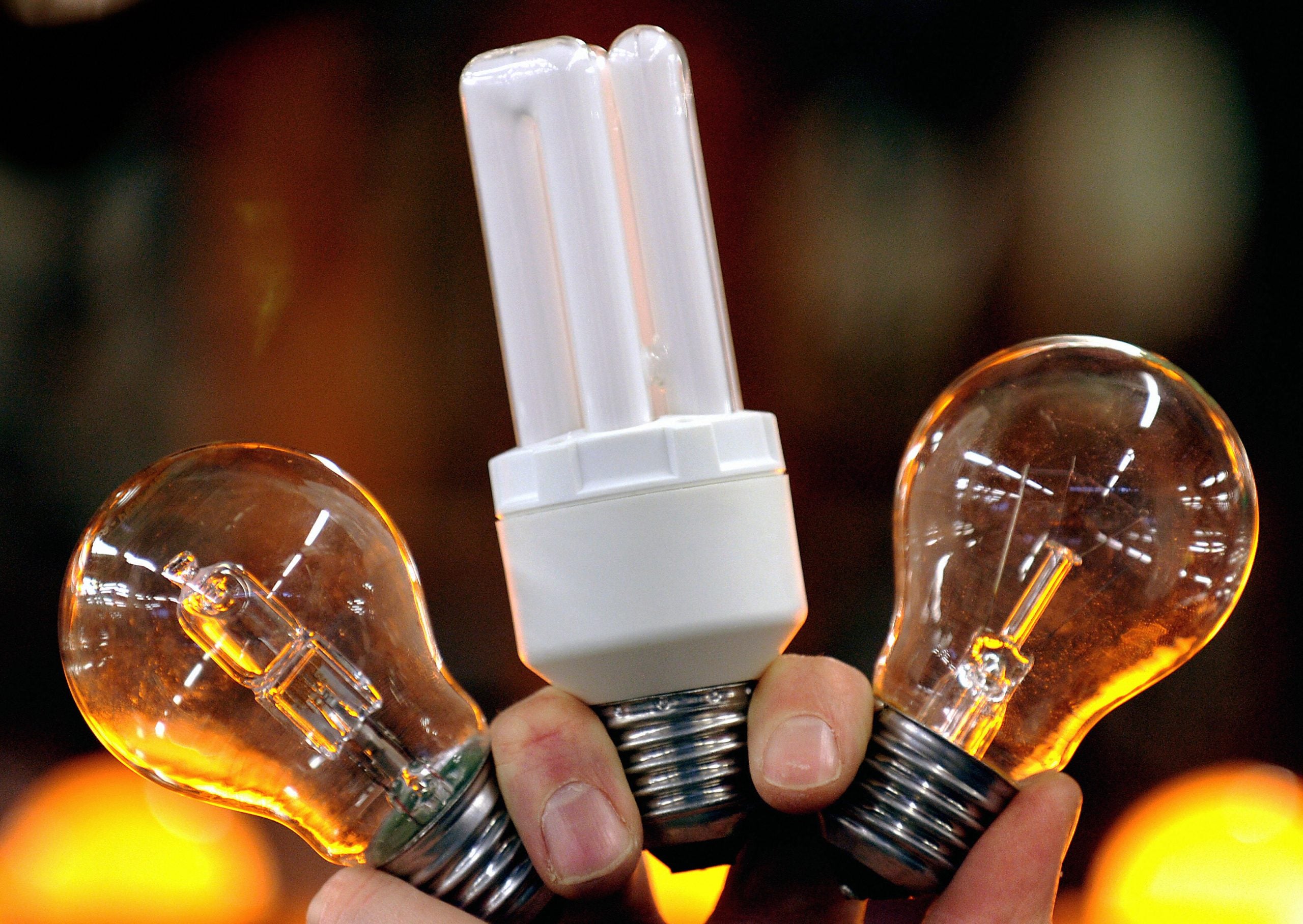 Energy-saving light bulbs and an incandescent bulb at a factory owned by the French company Osram. (Photo by Frederick Florin/AFP via Getty Images)

The Net Zero 2050 pathway report recently published by the International Energy Agency (IEA) anticipates total energy supply in 2050 at a similar level to 2010, despite a global population three billion people higher and an economy over three‐times larger. To reach this target, the energy intensity of global GDP will have to fall by 4% on average each year between 2020 and 2030, compared with average annual energy intensity gains of less than 2% each year between 2010 and 2020, says the IEA.

“Today, decarbonisation is the big thing, and energy efficiency is not getting enough attention, but focusing on energy efficiency means the energy transition can be done more quickly and be less expensive as we will use less energy,” suggests Borg.

To encourage companies to prioritise energy efficiency – whether in the transport, industrial, construction or power sectors – regulation is key.

The EU Ecodesign Directive is a good example of this. This policy regulates energy-related products sold in the domestic, commercial and industrial sectors, with the exception of transport, which is covered by other legislation. It was crucial to the EU meeting its 20% greenhouse gas emissions reduction goal for 2020 and is being updated to ensure products will be compatible with the bloc’s 2030 55% emissions reduction goal.

The policy is complemented by the Energy Labelling Directive, which allows consumers to compare the energy efficiency of products through an A–G rating.

Every five to 10 years, eco design standards and energy labels are updated. Because of this, in the autumn “some of the linear fluorescent lamps we have grown so used to seeing in offices and schools are set to disappear for good”, says Borg.

Overall, the Commission estimates energy labels and eco design legislation will bring energy savings of approximately 230 million tonnes of oil equivalent by 2030, saving the average consumer up to €285 ($347.38) a year on household energy bills.

“Eco design is a big success story for the EU,” says Mélissa Zill, programme manager at environmental standards NGO ECOS. “It might not be a very sexy topic, but it is powerful and can allow us to achieve a third of the 55% emissions savings needed by 2030.”

She adds: “Because it is a tool that already exists, it can be overlooked by policymakers. If there was more ambition, and regulations were updated faster, we could achieve much more.”

Data shows how the energy efficiency of products has improved in the EU. Energy consumption during production processes for domestic appliances dropped 17% between 2011 and 2018, says EU appliance trade body APPLiA. Downstream, some 68% of washing machines sold in 2018 were rated A+++ [recently relabelled simply as ‘A’], compared with just 2% in 2008, shows analysis from German market research outlet GfK.

EU energy efficiency regulations nevertheless remain way off the circular economy standards that will be required for a net-zero world.

A more circular economy would see annual waste from appliances fall as they would be designed to be longer-lasting, repairable or modular so they can be updated rather than needing to be replaced.

A five-year lifetime extension in products would correspond to about one megatonne of CO2 (Mt/CO2) saved annually by 2030 from washing machines in the EU, 5Mt/CO2 from laptops (currently designed to last around five years), 0.5Mt/CO2 from vacuum cleaners and 5.5Mt/CO2 from smartphones (average lifespan 2.3 years), states a 2019 report from the Brussels-based NGO European Environmental Bureau.

Regulation alone is not enough, however. Fiscal incentives are also needed to ensure repairing products, rather than throwing them away, becomes the norm, says Zill.

In January 2021, France introduced a ‘Repairability Index’ requiring manufacturers to score how repairable products are. The index remains in its early stage, but from 2022 the policy is set to be enforceable with fines if companies fail to detail a repairability score on products. Already, companies including Apple have begun including this information for certain products.

On a lifetime basis, more durable, energy-efficient products are often much cheaper than their less efficient counterparts. Nevertheless, as Borg says, “the most efficient product is not always seen as the most cost effective for the consumer” since upfront costs are generally higher. “With expensive goods like heat pumps, we need a regulatory framework that helps poorer households finance purchases.”

Research shows that rather than going to energy-efficient products, subsidies often still prioritise traditional fossil fuel equipment like gas boilers. As of December 2020, at least 19 out of 27 EU governments still incentivised the purchase of new gas boilers through tax reductions, loans and grants – despite many of the policies in question ostensibly being aimed at supporting green homes.

When more energy-efficient measures are required through regulation or supported through subsidies, large-scale production and roll out can bring down product costs within a few years.

This trend happened with LED light bulbs when countries around the world outlawed inefficient incandescent bulbs. In 2009, 400,000 LED bulbs were installed in the US; by 2014, this figure had reached 78 million. The price of LEDs, which use 85% less power than an incandescent bulb and can last for decades, plunged 90% between 2008 and 2016.

“With energy-efficient products, it is often fair at first to have a premium segment because manufacturers should be able to cover the cost of innovating to be energy efficient, but then usually everyone else latches on, other companies begin to manufacture at volume and prices begin to significantly drop,” says Borg. “Doubling production typically means costs go down 20–30%.”

As regulation in Western markets has become more stringent and demand for sustainable products has increased among consumers, businesses have increasingly emphasised the energy efficiency of their products.

This is the case, for example, for Dutch electronics corporation Philips, which became carbon neutral in 2020, partly as a result of energy efficiency improvements. “We are taking action to rethink our business models and decouple economic growth from the impact we have on the environment,” says the company’s Emily Wells-Burr. The most recent iterations of its defibrillators, patient monitors and ventilators use 10% less energy compared with their predecessors.

It is not just billion dollar corporations that are making energy efficiency a priority. Perardi e Gresino is an Italian precision machining company with an annual turnover of around €100m. The compressed air system used in its industrial operations recently underwent an audit by EU energy efficiency advocacy group mBenefits. By optimising distribution line processes and adapting components in machines, the company reduced energy costs by 80%, maintenance costs by 20% and lowered accident insurance costs by 10%.

“Energy efficiency is a priority for our company because it brings important cost reductions, increases safety for our employees and reduces our global carbon footprint,” says Paolo Piterà, energy manager of Perardi e Gresino.

While EU governments offer energy efficiency incentives, Piterà believes awareness around saving energy needs to improve. “We had no idea of what we were doing wrong before mBenefits came, and we would have intervened much sooner if we knew,” he says.

Kitchen appliances firm AGA is another business that has put energy efficiency at the heart of its product development and design. The Anglo-Swedish company produces traditional cast-iron stoves that have a reputation for being incredibly inefficient, but this is no longer the case with the modern AGA cooker.

“Sustainability and energy efficiency are hugely important to AGA,” says the company’s Laura James. “While traditional AGA cookers were on all the time, newer models have greater controllability, meaning you can turn ovens and hotplates on individually only when you need them. Smart controllers are now employed, while fast heat-up times mean you are never using energy unnecessarily.”

In the US, appliance and equipment standards are developed as federal regulations, with minimum standards introduced in a similar way to Europe. Some 15 states also enforce efficiency standards that are more stringent than federal policy.

Under President Trump, the US Department of Energy (DOE) missed a large number of statutorily required deadlines for updating appliance and equipment standards that were required under the Energy Policy Conservation Act (EPCA). In December 2019, the DOE blocked new efficiency standards for light bulbs set to come into place in 2020. The DOE also undercut energy-saving requirements for washers and dryers by introducing a “short-cycle” class of equipment that was exempt from current standards.

Since January, President Biden has been undoing Trump’s energy efficiency roll-backs. In addition, his multi-trillion dollar national infrastructure plan calls for hundreds of billions of dollars to retrofit millions of homes, including with more energy-efficient appliances.

Elsewhere in the world, the need to tackle energy efficiency is even more pressing. As of October 2019, no country in Africa had implemented minimum energy performance standards for electric motors, according to the IEA. The average air conditioner sold in Africa is on average less than half as efficient as the best available products on the market, it says.

This analysis has largely focused on consumer products, but all energy-intensive processes will need improving to meet net-zero ambitions. Buildings and the construction industry are particularly challenging.

In Africa, policy must anticipate that only 30% of the expected building stock in 2040 currently exists, says the IEA. In Europe, by contrast, the European Commission estimates that 85% of the continent’s building stock was built before 2001, much of it relying on fossil fuels for heating and equipped with old and wasteful appliances.

The cost of retrofitting the world’s building stock to meet net zero is massive. A UK parliamentary report from March 2021 highlights that the average cost of retrofitting a property to be adequately energy efficient, even before the addition of a heat pump, is £18,000. With 19 million properties in the UK, the scale of the retrofit challenge will be “enormous”, says the report.

There are going to be a lot of buildings being built today that are not fit for the future. Michael Neaves, ECOS

“Everybody knows private finance is needed on a huge scale to retrofit all our buildings,” says Michael Neaves from ECOS. “We will need to leverage mortgages, lending and subsidies to address the challenge.”

The situation is more difficult in Europe since “building codes are highly fragmented at a national and regional level,” adds Neaves. “There are going to be a lot of buildings being built today that are not fit for the future.”

In March 2021, 31 signatories from the construction industry sent a letter to the European Commission calling for an “ambitious EU strategy for a sustainable built environment”. Bianca Wong, global head of sustainability at building materials firm Kingspan, says the UK building industry too wants “a long-term national retrofit strategy” to decarbonise homes.

“Government policies should be a key enabler to drive the industry towards ensuring all builds are working towards the net-zero commitment thereby avoiding expensive retrofit later on,” Keatinge says. “It can cost up to five times more to retrofit a new build to meet net-zero targets compared to building it to high energy efficiency standards in the first place.”