California has so often been a clean energy pioneer, it is unusual to watch the state play catch-up, but on offshore wind, California lags not just the global leaders – the UK and China – it trails even East Coast states like New York and New Jersey.

How did California, after leading the US – and often the world – on energy efficiency and rooftop solar, electric vehicles and battery storage, fall so far behind on offshore wind?

Offshore wind was always going to be challenging in California. Unlike the sites hosting offshore wind in Europe, and those soon to be developed along the US East Coast, California’s most promising spots are in waters too deep for turbines with foundations driven into the the seabed. California will instead require floating turbines towed to the project site and anchored to the sea floor with mooring lines. Another hurdle: some of the state’s best sites for floating offshore wind, especially along the Central Coast, overlap with areas used by the US Navy for flight training. 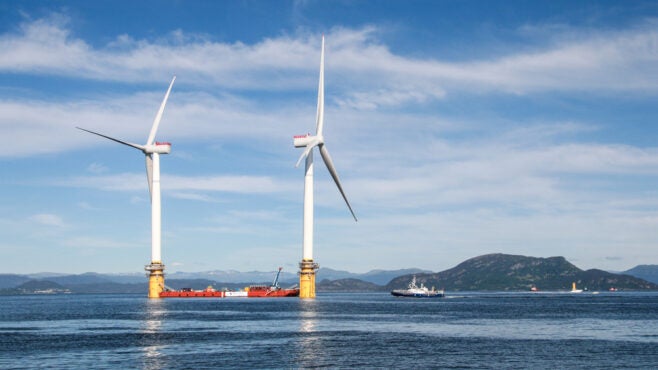 Floating wind turbines such as these leaving Stord in Norway bound for the Hywind Scotland Pilot Park will be required to develop projects in California’s deep coastal waters. (Photo by Terje Aase via Shutterstock)

These challenges are not insurmountable. Rapidly maturing floating offshore wind technology is exiting the pilot project stage. The world’s largest floating offshore wind farm, the 50MW Kincardine project in Scotland, recently started supplying power to the grid. Much larger projects are scheduled to come online in Europe within a few years, and the conflicts with military use on the Central Coast have been resolved. In a deal announced by the Biden administration and the State of California in May 2021, they identified coastal areas in the state that could support an initial 4,600MW of offshore wind generation capacity.

With floating offshore wind technology approaching commercialisation, the Defense Department seemingly content it can live with offshore wind in California, and the Biden administration fully behind a US offshore wind boom, the most important remaining obstacle was a lack of action at the Capitol in Sacramento, California. Without guidance from the state’s government on policy or targets, regulators and grid operators could not make long-term plans for offshore wind’s role in a carbon-free grid and project developers could not fully commit to the California market.

That changed this month with passage of AB-525. This legislation, signed by Governor Gavin Newsom on 23 September, directs the California Energy Commission to “evaluate and quantify the maximum feasible capacity of offshore wind to achieve reliability, ratepayer, employment, and decarbonization benefits” and establish offshore wind production goals for 2030 and 2045 by 1 June 2022. The bill also directs the Commission to complete a strategic plan for offshore wind by 30 June 2023, one that addresses workforce development, port space and infrastructure upgrades, and transmission planning.

The amended version of AB-525 passed by lawmakers is not as strong as the original bill, which had included a target to build 10,000MW of offshore wind capacity by 2040. However, the bill signed by Newsom passed with near unanimous support. It also had the backing of a broad coalition of climate, environmental justice and labour groups, including the State Building & Construction Trades Council of California, one of the most powerful voices in Sacramento.

California’s annual technical offshore wind potential is 392 terawatt-hours (TWh), or 157% of the state’s 2019 electricity use, according to a report by the Environment America Research & Policy Center and Frontier Group. Installing 10,000MW of offshore wind power capacity by 2040 would save $1bn annually in electricity generation costs, finds a report published last month by the University of Southern California’s Schwarzenegger Institute. State government analysis published in March found that 10,000MW of offshore wind, along with out-of-state onshore wind and long-duration energy storage, will be necessary to meet California’s requirement of 100% carbon-free electricity by 2045.

Crucially, in a state where climate change-driven extreme heat, drought and wildfires have repeatedly threatened the reliability of the electricity grid in recent years, offshore wind can feed power to the grid when and where it is needed most. “Offshore wind has a generation profile complementary with solar, is a consistent generation source with high capacity factors, and, with proper transmission resources, can inject power directly into heavily populated coastal load centers,” write the authors of the Schwarzenegger Institute report.

With AB-525 now law, Newsom should collaborate with his fellow West Coast Democratic governors, Kate Brown in Oregon and Jay Inslee in Washington, to advance offshore wind development. A template for such a regional partnership already exists in the SMART-POWER agreement signed by Maryland, North Carolina and Virginia last year. Brown signed legislation in June that committed Oregon to plan for up to 3,000MW of offshore wind projects by 2030, so the timing for a partnership is propitious.

Tapping the world-class offshore wind resources on the Pacific Coast, especially along the remote California-Oregon border, will also require significant public and private sector investment. The federal government will likely have to backstop funding for port and transmission upgrades via the Department of Energy’s Loan Programs Office or a potential national green bank.

California has been at the forefront of the global energy transition for decades. Offshore wind was an exception, but momentum has finally shifted towards action. The Bureau of Ocean Energy Management plans to hold a lease sale for wind energy sites in federal waters offshore California in 2022, Amanda Lefton, the agency’s director, confirmed last month at the Business Network for Offshore Wind’s International Partnering Forum. That, combined with Newsom’s signature on AB-525, means the state is also poised to take the lead in the floating offshore wind industry.

Topics in this article: California, Offshore Wind, US