Women and people of colour are still under-represented in US energy jobs, but there are encouraging signs of a diversifying workforce. In California, opening the door to apprentices and other entry-level workers is helping to diversify the future workforce, which will be needed to build large renewable energy projects.

Employment in the US clean energy industry is still recovering from the economic slump caused by the Covid-19 pandemic. Energy efficiency, solar, wind and other clean energy sectors shed around 300,000 jobs in the US in 2020. While employment in the US solar industry dropped by nearly 7% last year, the number of women employed in the industry increased by around 4,800 to nearly 70,000, says the industry’s National Solar Jobs Census. The added jobs boosted the share of women in the solar workforce from 26% to 30%. 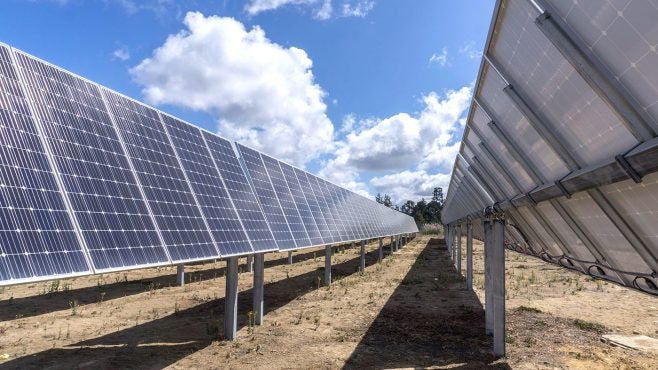 Most utility-scale solar energy projects in California are built with union labour. (Photo courtesy of the California Energy Commission)

Jobs added across demographic groups have increased faster than for the solar industry overall. Since 2015, when the federal government began tracking employment in the sector, employment has increased for women (39%), Hispanic or Latino workers (92%), Asian workers (18%), and Black or African American workers (73%) compared with the 11% industry-wide increase.

Unions are playing a key role in driving this change. The State Building & Construction Trades Council of California represents 500,000 unionised workers. Nearly 70,000 of them are apprentices and 72% of those apprentices are people of colour, says the group’s president, Robbie Hunter. People of colour have comprised 70% of the apprenticeship pool each of the last five years in California, shows data cited by Betony Jones in a paper published last November by the UC Berkeley Labor Center.

The state building trades also created a pathway for at-risk youth to join a union and start a career in construction.

“The construction of grid-scale renewable energy generation and the manufacture of zero-emission transit buses have both broadened access to good jobs for low-income workers of colour,” write the authors of a California Workforce Development Board report published in September 2020.

In California, apprentices aren’t just becoming more diverse, they are helping to make it more economical to use union labour on large renewable energy facilities. Most utility-scale solar energy projects in California are built with union labour.

“Employing apprentices on solar projects is a great way for entry-level workers to gain occupational skills in their chosen trade,” writes Betony Jones. “Starting apprentices earn 50–60% of the journey-level wage, which means that their starting wages are comparable to entry-level solar installers in the non-union labour market.”

Jones also notes that in California the International Brotherhood of Electrical Workers, the union representing electricians and utility workers, created an entry-level position, ‘construction electrician/wireman’, for workers who have yet not been accepted into an apprenticeship programme.

“The solar fields, you are on ground level – it is mass production,” he says. “There is a higher ratio for apprentices, and there is that efficiency.”

“This is repetitious,” he adds. “Within a week or two, you can get really efficient at it.”

The upshot is that utility-scale solar projects in California are a good way to start a career in a union job.

Sam Appel, a policy manager at BlueGreen Alliance, a non-profit organisation that unites labour and environmental groups, agrees. “We are not just talking about a one-shot construction gig. We are talking about a long-term career with increasing skill and pay and family-sustaining wages and benefits, and the benefit of a representative union to advocate for you.”

Hunter says solar developers are not balking at using union labour in California.

“What they want to do is meet deadlines, get their projects online,” he says. “These projects are in the middle of nowhere, mostly. We have a workforce that is highly trained, and they are willing to travel.”

“It is all about the ability to get a workforce there and get it done as soon as possible. Speed offsets the cost difference between union and non-union.”

“I don’t think [project developers] see us as a problem,” says Hunter. “They see us as the answer to the problem.”

Current trends suggest union membership is poised for growth among US clean energy workers. Beyond California’s utility-scale solar industry, pledges to use union labour are becoming the norm in the US’s nascent offshore wind industry, including at the recently approved Vineyard Wind project in Massachusetts, the US’s first large-scale offshore wind project.

Joe Biden wants to add millions of US workers to union membership rolls. From the perspective of the White House, it is no surprise why.

Union membership rates in the US’s clean energy industries are reaching parity with the national average. A little more than 10% of solar workers are unionised, which is comparable to the overall US union membership rate in 2020, 10.8%.

Further advances in union membership across the US clean energy industry would require the White House and its labour allies to overcome some headwinds. Many of the large-scale solar projects in California employing unionised construction workers are located far from the state’s urban centres, excluding workers unable or unwilling to commute. There is also the question of workers employed by small-scale rooftop solar installers that dominate many markets.

BlueGreen Alliance’s Appel urges federal and state officials to crack down on the “misclassification” of full-time workers as independent contractors who are ineligible for benefits. This situation includes construction workers and, for example, drivers working for ride-hail companies.

“Misclassification is creating an adoption barrier because when these companies misclassify a truck driver or Uber driver, they are putting all the costs of transitioning to a new technology onto the driver,” he says. “We are forcing people who earn $30,000 a year to pay for a $200,000 electric truck. It is going to create a huge barrier to reaching our climate goals in transportation.”

And there is still work to be done to further diversify the energy industry writ large.

Women, Hispanic or Latinx workers and Black or African American workers have below-average representation in the energy industry, shows a report for the National Association of State Energy Officials by BW Research Partnership. And just 31–49% of energy workers surveyed for the report, across races or ethnic identities, says their company is doing enough to recruit, hire or equitably promote people of colour. Similarly low percentages of respondents, 36–48%, say their companies’ senior leadership is racially or ethnically diverse.

Topics in this article: California, Diversity, Jobs, Solar, US