If you overlay a map of US coastal water depths with another depicting offshore wind speeds, a challenge – and an opportunity – are immediately apparent. Much of the offshore wind energy potential in the US, especially on the West Coast, is in water too deep for the technology used by nearly all turbines deployed at sea around the world to date.

By the end of 2020, more than 35,000MW of offshore wind generating capacity had been installed globally, but projects that use turbines designed for deep water account for less than 1% of that total. The rest use turbines with steel foundations fixed to the seafloor.

Economics limits these fixed-bottom turbines to waters up to 60m deep. Without additional innovation to reduce the costs of harvesting the abundant wind resources in deeper water, much of the offshore wind energy potential in the US, Japan, South Korea and other promising markets could go untapped. In the US, nearly 60% of offshore wind potential is in water deeper than 60m, says the National Renewable Energy Laboratory (NREL). In Europe, deep water accounts for up to 80% of offshore wind potential. 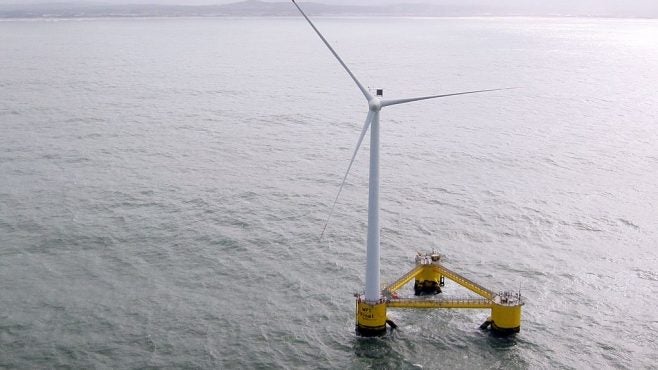 A floating wind turbine off the coast of Agucadoura, near Porto, Portugal. (Photo by Marc Preel/AFP via Getty Images)

The solution the industry is working towards is to deploy floating turbines that can access the strong, steady winds found in deep water. Such turbines are towed from port to the project site and held in place with at least three mooring cables anchored to the seafloor. Equipment manufacturers and project developers must still settle on which floating platforms are best suited to support turbine towers reaching more than 100m above the waterline and blade tips that extend another 100m beyond that. The entire structure must remain stable, even in rolling waves.

Floating offshore wind deployments to date have been limited to demonstration projects in Europe and Japan. Even the largest of these projects, Hywind Scotland and WindFloat Atlantic in Portugal, at 30MW and 25MW, respectively, pale next to today’s largest fixed-bottom offshore wind projects, each of which comprises dozens of turbines and hundreds of megawatts of generating capacity.

Much bigger floating projects are coming. “We expect we will see floating technology at utility scale – 600–1,000MW a project – by 2024,” says Walt Musial, an engineer who leads offshore wind research at NREL. However, building projects that big at prices competitive with fixed-bottom offshore or onshore wind will likely require turbines to be purpose-built for floating duty.

Despite the challenges, offshore wind developers are aggressively pursuing opportunities in deep water.

“Eighty per cent of the world's offshore wind resources that could be feasibly developed are at greater than 60m,” says Musial. “If we use floating technology, we will enable sites that are further from shore, more out of sight than the fixed-bottom systems and that tend to have better winds.”

In California, state officials announced an agreement last month with the Biden administration to resolve military use conflicts that have delayed offshore wind energy development. State and federal officials identified zones that can support up to 4.6GW of floating offshore wind projects off Morro Bay on the Central Coast and Humboldt County in Northern California. The federal offshore energy regulator plans to hold a California offshore wind lease sale auction in mid-2022.

Eighty per cent of the world's offshore wind resources that could be feasibly developed are at greater than 60m. Walt Musial, NREL

“Floating offshore represents perhaps the largest frontier for wind power in Asia-Pacific in the long term,” says Robert Liew, an analyst with the research company Wood Mackenzie. “Almost all markets in Asia-Pacific have coastlines, and floating offshore can unlock wind resources near coastal cities even in low wind speed areas.”

However, to realise that vision, developers must drive down costs.

Floating offshore wind could be commercially feasible if capex costs fall to $4m/MW by 2030, compared with $2–$3m/MW for fixed-bottom offshore wind and $1.5m/MW for onshore wind in Asia-Pacific, suggest Japanese government estimates cited by Wood Mackenzie. Capex costs should decline by 40% to average $3m/MW in Japan, South Korea and Taiwan by 2025–2030, estimates the consultancy.

The levelised cost of energy (LCOE) to build a 1GW floating offshore wind project in each of five zones along the California coast could decline from an estimated $95–$114 a megawatt-hour (MWh) in 2019 to $53–$64/MWh by 2032, suggests a NREL report published in October 2020.

Convergence on cost between the two technologies could happen sooner depending on the pace of innovation and deployment for floating wind projects.

The path to commercialisation

If floating offshore wind is to reach its full potential, the industry must go beyond its oil and gas industry roots and partner on an “integrated systems approach” to design turbines purpose-built for floating projects, finds a research team at NREL.

Companies working on floating offshore wind technology have made significant gains, but the iterative, one-off nature of the innovations is holding back progress. Initial designs for the buoyant substructures required to keep floating turbines upright and stable at sea have borrowed heavily from concepts used in the offshore oil and gas industry.

“One manufacturer designs the turbine and tower, another company designs the substructure, and sometimes a separate developer tackles array layout and logistics,” says NREL engineer Garrett Barter. “The tremendous complexity of the physical environment for floating installations and interplay of design components make this divide-and-conquer approach quite costly and less effective in identifying workable solutions.”

Musial adds: “A multidisciplinary effort makes it possible to simultaneously focus on a wide range of factors and then optimise designs to achieve a minimum system cost.”

Governments are playing a role in advancing floating turbine technology and reducing costs.

The US Department of Energy’s Office of Energy Efficiency and Renewable Energy and Advanced Research Projects Agency-Energy have together invested more than $100m in R&D funding for floating offshore wind technology, says the White House. The European Commission’s Horizon 2020 research and innovation programme allocated $6m to the FLOTANT project to develop optimal mooring and anchoring systems for a deepwater turbine.

The path to commercialisation for floating turbines is made less challenging by the advantages the technology enjoys over fixed-bottom turbines. Much of the turbine assembly, construction and commissioning will happen at port. “That is a good thing because it will avoid a lot of labour at sea, which is very expensive and can be more dangerous than labour conducted in the harbour,” says Musial. If the selected port has a navigation channel and an unobstructed path to the sea, the fully assembled turbine can be towed to the project site. 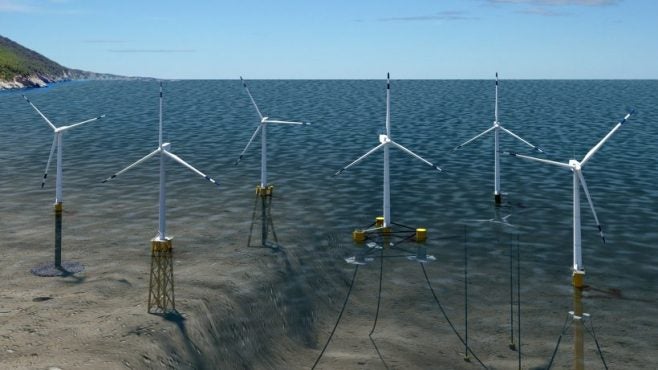 Floating turbines also provide project owners with operational flexibility. Because the platforms are not driven into the seabed, turbines could be relocated to optimise wind energy production, ameliorate wildlife impacts or to avoid commercial fishing conflicts.

Even in regions where the initial wave of offshore wind energy projects is expected to use fixed-bottom turbines, like the US East Coast, policymakers and industry should “future-proof” port infrastructure to prepare for an eventual transition to floating technology, advises a report published earlier this month by the Business Network for Offshore Wind, a US non-profit organisation.

“Considering this crucial question now, when purpose-built ports are being designed and constructed to serve the offshore wind industry, will enhance the longevity of these facilities by enabling them to evolve alongside the industry’s expected overall shift, over the next decade, towards floating offshore wind,” the authors write.

Floating technology unlocks access to some of the world’s best offshore wind energy sites. Equinor’s Hywind Scotland project has achieved the highest average capacity factor of any UK wind farm for three years running. For the 12 months leading to March 2021, the project generated electricity 57.1% of the time.

With such potential, the industry is confident growth is ahead. The Global Wind Energy Council, a Brussels-based trade group, expects floating offshore wind to reach commercialisation, with at least 6GW of generating capacity installed globally, by 2030.

The development of the hydrogen economy will support the fulfilment of decarbonization objectives, particularly for those sectors that are difficult to electrify, such as heavy industry, long-distance trucking, shipping, and aviation. GlobalData's Hydrogen Service tracks investment in the hydrogen sector, and provides you with: For more information, and to download sample pages from our quarterly market analysis, including a summary of the active and upcoming low-carbon hydrogen capacity by region, please enter your details.
by GlobalData
Thank you.Please check your email to download the Whitepaper.
Topics in this article: Offshore Wind, US