On 5 May 2021, the EU unveiled an industrial strategy update for a post-pandemic world. In practice, this is more analysis than action. It is non-legislative and it comes at an awkward time. Its predecessor, unveiled a year ago on the day before Covid-19 was declared a pandemic, was the latest in a long line of strategies with little on-the-ground impact. At the same time, the strategy cannot pre-empt the sweeping reform of EU climate and energy legislation now planned for July, aimed at ramping up to a 55% emission reduction by 2030. 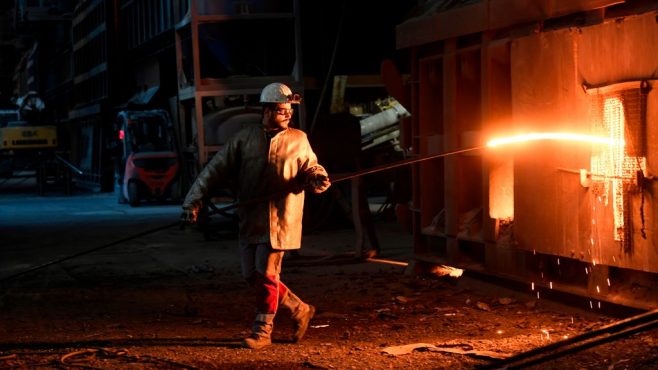 A worker takes a sample at the steel production of German conglomerate Thyssenkrupp in Duisburg, western Germany in November 2019. (Photo by Ina Fassbender / AFP via Getty Images)

The industrial strategy update floats in between these initiatives. It sets out an appealing narrative that embraces Covid-19 as an opportunity to transform European industry, but transition plans need to be matched with funding, and this is not happening.

Take steel. Steel is very much part of the ‘real economy’. It is found in everything from bridges to cars to wind turbines. In last year’s industrial strategy, steel and other manufacturing industries were singled out as a “top priority” to modernise and decarbonise. This year’s update reinforces this need for radical change with a 30-page report on steel alone.

However, as the European Commission highlights, “this is a race against time”. With an investment cycle of around 25 years and plants that last for 40, steel makers need to make net-zero-compatible investments today to avoid the risk of stranded assets. With low market capitalisation and a high carbon footprint, however, steel stocks are not an attractive proposition to ESG investors.

“I think there is a real risk some of the sustainability funds are not invested or directing investments into these kinds of real economy stocks that need huge capital investment,” said Carole Ferguson, head of investor research at CDP, a non-profit organisation that runs a global environmental disclosure system, after the launch of the Commission’s industrial strategy update.

“There is a big push by investors to get companies to set net-zero targets and you get initiatives like the Climate Action 100+, but then that is not matched up with the realisation of what transition plans are needed and what the implications are in terms of capital investments.”

The taxonomy could even make things worse if investors were to swap high-carbon steel stocks for a different sector. “We have seen ESG funds having a tendency to invest in technology stocks because of the lower carbon footprint,” she says. “I feel that just having good G or taking the S [of ESG] into consideration is not going to be sufficient to get the clean funds you need.”

Thomas Hörnfeldt, vice-president for sustainability and public affairs at SSAB, a Swedish steel company, goes a step further. “It [the EU taxonomy] doesn’t promote investment in industries and companies that need to transform. If anything it steers investments towards stuff that is already green. It is a great solution to a problem that doesn’t exist.”

SSAB is involved in HYBRIT, a project to make fossil-free steel by 2026 using emissions-free hydrogen gas instead of coal. The Swedish Energy Agency is a significant investor and in April 2021, Volvo signed on as an offtaker. Unsurprisingly, Hörnfeldt argues that Europe risks missing out on breakthrough technologies by spending too much on smaller improvements.

Johanna Lehne from think tank E3G disagrees. She believes the taxonomy can help define a “green” activity. For her, its main weakness is that it defines installations as ‘green’ based on a definition in the EU Emission Trading System (ETS) of the plants that appear in the top 10% in terms of emissions performance. In an echo of Hörnfeldt’s fear, this means rewarding incremental improvements, not potential breakthroughs such as HYBRIT, she says.

“The critical problem is the benchmark is not very ambitious, regardless of whether investors follow up,” she argues.

The taxonomy has to start somewhere, however. Its role is as much to name and shame ‘dirty’ investments by not including them as it is to promote ‘green’ ones. Think of the fight natural gas and nuclear power are putting up to make it onto the list. Going forward,  its impact on investments is, most likely, only a matter of time. Contributing editor Mark Nicholls wrote last month: “While the immediate impact of the taxonomy is likely to be muted, it is expected to inform a range of incentives, standards, regulations and investment flows that, over time, will profoundly influence corporate behaviour.“

For now the EU taxonomy defines what economic activities are aligned with EU sustainability objectives; in future it is likely to push companies to pursue them.

CBAM and a just transition

While many applaud the EU’s foray into sustainable finance, there is also a call for it to focus on the ‘real economy’, with regulation aimed at assets not investors.

Recommendations often boil down to a carbon price. Ideally, that price should reach about €100 a tonne (t), experts say, to get technologies like carbon capture and storage and green hydrogen off the ground. That would be double today’s EU ETS price, which is already at record levels.

The reality is that so far, Europe’s carbon price has struggled to decarbonise industry. Industrial emissions have been largely flat over the last 15 years. That will need to change if the EU wants to reduce its greenhouse gas emissions by 55% by 2030.

However, the higher the carbon price, the greater the pressure to protect European manufacturing from competition from imports (from regions with looser carbon constraints). Today’s carbon price of €50/t is breathing fresh life into Commission plans for a so-called carbon border adjustment mechanism (CBAM). After years of talk, a proposal is now expected in July.

The CBAM cannot solve all ills, however. For example, it will not help the export-oriented European chemicals industry to stay competitive on the global market. At the same time, free allowances, which the Commission is likely to continue offering manufacturing industries in the medium-term, alongside the gradual introduction of a CBAM, do not incentivise industrial innovation. The bottom line is that the EU ETS was designed to bring down emissions, not deliver breakthrough technologies. That requires an industrial policy.

The EU’s industrial strategy update lays the ground for future policy packages, starting with the ‘Fit for 55’ overhaul of EU climate and energy legislation this summer. The Commission recognises the enormous industrial transformation net zero implies and the opportunity to accelerate action towards it.

Covid-19 recovery plans provide the perfect vehicle for public-private partnerships to lever massive investments. If ESG funds want to support the transition to climate neutrality, they too will need to confront the real economy.

The table on steel producers was updated on 14 April 2021 to reflect commitments made by HBIS that were not included in the original source data.