The Covid-19 crisis continues with significant and uneven impacts. Nonetheless, certain trends are becoming clear, not least the resilience of clean energy companies in the face of the worst global recession since the Second World War. Such positive news is increasing hopes the crisis can accelerate the energy transition for the benefit of the climate, the economy and society at large, even if massive challenges lie ahead. 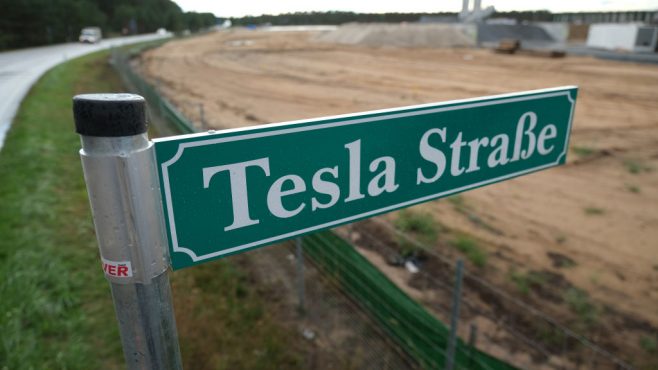 A street sign that reads ” Tesla Strasse” (Tesla Street) stands at the construction site of the new Tesla Gigafactory near Berlin in August 2020 near Gruenheide, Germany. The factory is scheduled to begin producing Tesla electric cars in the summer of 2021. (Photo by Sean Gallup/Getty Images)

“Renewable companies have been more resilient than other firms thanks to the long-term policy drivers behind decarbonisation,” says Daniel Atzori, a research partner at energy consultancy Cornwall Insight. “Investors and developers are reasonably confident the energy transition’s policy and economic fundamentals will not be impacted.”

In its latest survey of how the global energy community perceives Covid-19 and its implications, the World Energy Council (WEC), which brings together energy leaders across the value chain, finds almost half of respondents expect a “new normal”. That is three times more than in April 2020.

Energy companies are moving beyond business as usual and reallocating investments, notably to digitalisation and R&D, WEC reports. The path to economic recovery is different in different regions, but half the respondents believe Covid-19 recovery measures are accelerating the energy transition. Asia (65%) and Europe (56%) are most optimistic, while half of respondents from Africa see Covid-19 causing delays.

Opinion: Clean energy and Covid – fighting to build back better

The biggest barrier to meeting the Paris Agreement is insufficient behavioural change, the WEC survey suggests. “The pace of transition is not determined by the accelerated rate of technological innovation, but by the ability of people to make choices,” it states. It is to this end that WEC has adopted the mantra “humanising energy” for its work out to 2025.

‘Build back better’ responsibilities may be distributed across civil society, business and investors, but the survey confirms the weight of expectation is on governments to lead the recovery and drive the energy transition forward. In mid-March, Energy Monitor ran a series of pieces analysing government commitment to a green recovery.

The headline conclusion is that so far, European Covid recovery plans are disappointing. While governments are investing in clean energy, they are also spending substantial amounts on the fossil fuel economy.

“There is little evidence most governments are making decarbonisation a number one priority in their coronavirus recovery packages,” reported data journalist Nick Ferris, after crunching the numbers on Germany, France, the Netherlands, UK, Spain and Poland.

Out of these six countries, the UK is spending the most overall, but also the most on fossil fuels. It has made strong commitments to build back better, yet questions remain whether it can back these up with cash and policies.

France and Spain stand out as best-in-class for a green recovery. They have chosen different ways to distribute their funds, however, with Spain channelling significant amounts to municipalities and regions. France impresses with the sheer size of its climate commitment; it will probably spend 40–50% of its EU Covid-19 recovery money on climate action, French chair of the European Parliament’s environment committee Pascal Canfin said in an interview.

Italy is the largest recipient of EU funds, but analysis of its recovery plans reveals that so far, Italy is spending more on fossil fuels than clean energy. This stands in stark contrast to Poland, which plans to use more than 80% of its recovery money on energy transition measures. Yet campaigners warn Poland will need to match spending plans with strong climate policies to really break with coal.

That leaves Germany, home of the Energiewende. Germany is priorisiting renewables build-out, electric vehicles (EVs) and hydrogen with a post-Covid-19 recovery plan that seeks to extend the energy transition beyond the power sector. It is not the greenest of the bunch, but it is investing twice as much in EVs as conventional cars, a key change in a country whose economy is heavily reliant on the car industry.

“We failed ten years ago to connect the climate crisis with economic recovery, but this time we managed,” says Canfin. It remains early days, however, and other parts of the world are in much less good shape than Europe to deal with the scale of the challenge. Latin America is just one region where countries are struggling to marry climate action with the need to stop their economies from falling apart after being hit hard by Covid-19.