The start of June brings summer in the Northern Hemisphere: a time of sunny days, beachside holidays and – if you’re lucky – a drop in Covid-19 cases as the climate warms. But for swathes of the world, summer also brings the ever-growing threat of wildfires.

Already, 2021 has seen 6,800 acres burn across California, with experts warning of a devastating season to come due to the state’s ongoing drought. 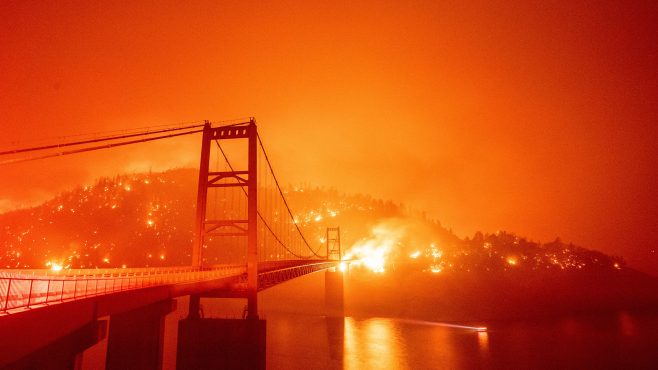 Bidwell Bar Bridge on Lake Oroville in Northern California is surrounded by fire in September 2020. (Photo by Josh Edelson/AFP via Getty Images)

Last year saw the largest wildfire season ever recorded in the state’s modern history, with a total of 9,639 fires burning 4,397,809 acres, or roughly 4% of the state’s total land mass. Some 31 people were killed, and 10,000 structures were destroyed at a cost of over $12bn in damages.

So great was the smoke emitted by these fires that the first two weeks of September saw average solar-powered electricity generation in the state decline 30% from the July average. The drop was caused by the massive rise in airborne particulates of 2.5 micrometers or smaller (PM2.5), which reduce the amount of sunlight that reaches PV panels.

The typical daily maximum PM2.5 rate of 30-100 micrograms per cubic metre (µg/m3) recorded in the state last summer shot up to nearly 1,500 µg/m3 at the start of September.

In July, daily solar generation averaged 113 GWh. Solar generation then declined as massive wildfires broke out in August, reaching a low of 68 GWh on 22 August before returning to around 100 GWh at the end of the month. It then fell to 50 GWh on 11 September as PM2.5 smoke pollution increased again following yet more wildfires, whose smoke was blown across the state.

By the end of September, data from the Global Fires Emissions Database suggested the emissions impact of fires in 2020 had been more than 25% higher than the state’s annual emissions from fossil fuels.

Topics in this article: California, Solar, US