The world’s supply chains are in crisis. Plummeting demand during 2020’s lockdowns, followed by booming demand during the economic recovery of 2021, has blown up our ‘just-in-time’ system. The news is filled with vessels queuing to enter ports and empty freight containers stacking up with nobody to take them away. It is not just the maritime sector: road freight supply chains have also seen a perfect storm of Covid-19 restrictions, driver shortages and drastic fuel price increases, warned the International Labour Organization at the end of last year.

The pandemic has reminded businesses just how vulnerable the economy is to major shocks, and with the global energy transition rapidly changing systems and technologies that have been in place for decades, there are significant risks of further shocks in the coming years.

“The energy transition is very significant,” says Robert Windsor from the British International Freight Association. “Colleagues are aware of forthcoming changes, with some multinationals engaged in trials of new technology, but many members are still trying to work out the practical implications of how it will impact their businesses.”

Hydrogen
Why hydrogen is not the answer to petrostates’ woes 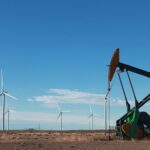 Professor Edward Anderson, from Imperial College Business School, London, adds that the energy transition will make the process of getting energy “more complicated and more liable to fluctuations”. This is because of the rising share of variable renewables like wind and solar, as well as more complicated mineral supply chains and balancing systems. “The energy transition has got so many different components and each of those components is a possible disruptor,” he says.

One of the biggest climate challenges is decarbonising the transport sector. The EU has announced it wants truck CO2 emissions cut by a third by 2030 from 2019 levels, a challenge that is prompting intense innovation from the world’s heavy-duty vehicle manufacturers to try and develop new, future-proof models.

A role for hydrogen?

It is now widely believed that electric vehicles (EVs) will dominate the future passenger vehicle market. They already have a sizeable market share, and automobile giants are fighting it out for access – but battery electrification is more complicated for heavy-duty vehicles. A lithium-ion battery to power a 44-tonne truck would weigh several tonnes, dramatically reducing the space available for freight. Existing battery technology also has a limited range and lengthy charge time, which can impact a haulier’s bottom line.

Hydrogen fuel cells offer an alternative means of electrification. In this case, the electricity does not come from the mains but is generated by hydrogen stored in the vehicle coming into contact with an electrochemical cell. Fuel cell electric vehicles (FCEVs) produce tailpipe emissions consisting only of water, can be refuelled as fast as a conventional car, and offer serious power on the road, with 1kg of hydrogen delivering the same power as a gallon of diesel.

Asian vehicle manufacturers lead the market for hydrogen mobility. South Korean conglomerate Hyundai released the Xcient Hyundai Truck to the mass market in 2020. The truck can travel 250 miles on a full tank, and takes eight to 20 minutes to fill up. There is an ongoing pilot in Switzerland – a country where road tax is waived for zero-carbon vehicles and hydropower provides reliable carbon-free electricity – where the trucks are undertaking deliveries for seven supermarkets and logistics companies. The company is due to deliver 1,600 hydrogen fuel cell trucks to the country by 2025.

European governments are preparing for hydrogen trucks on the road. EU transport commissioner Adina Vălean said in December 2021 the European Commission expects 60,000 hydrogen trucks on European roads by 2030. Meanwhile, the UK Hydrogen Strategy, published in summer 2021, announced that ministers will “undertake a range of research and innovation activity which will focus on difficult to decarbonise transport modes, such as heavy road freight”.

One of the major challenges around establishing hydrogen transport systems is the need for hydrogen supplies. Moreover, for the fuel to contribute to the energy transition, this must be clean hydrogen. The EU has been criticised for inadequately scaling up the roll-out of EV charging points, with some 225,000 public chargers available across the continent at the end of 2021. However, these figures are rosy compared with hydrogen refuelling points: at the end of 2020, France, Germany, the UK and Italy collectively had only 218 points.

Integrating hydrogen into the system is a “complex endeavour”, says the IEA, involving long-term policy signals, support for demand creation, promotion of innovation and  standardisation – but it presents opportunities for business.

Australian-born Luke Johnson is a self-described “serial entrepreneur”, whose company H2 Green is developing a national hydrogen network in the UK. Two green hydrogen (hydrogen made from renewable electricity) hubs have been announced in Inverness and East Sussex, and he plans to have one in every major population centre by 2035. These hubs are largely being built inside existing industrial hubs where the company anticipates the highest density of commercial vehicles.

H2 Green plans to produce hydrogen both with on-site renewables, or from grid electricity bought from renewables generators via power purchase agreements. “Transporting hydrogen, whether in a gaseous state, or by liquefying and regasifying, is extremely expensive," says Johnson. "So this [on-site generation] might give us an advantage over competitors.” There are also plans in place to import hydrogen.

H2 Green will not be the only company branching out into this space. Oil major Shell, for example, built its first hydrogen forecourt in the UK in 2017. However, Johnson welcomes the competition. “We all have the same common mission: to supply green hydrogen," he says. "Increased competition is likely a precursor to the whole market really getting going.”

Some are sceptical hydrogen can ever get a real foothold in the truck market, in part because the roll-out of production and refuelling infrastructure is so immature. FCEVs also remain much more expensive than battery electric vehicles (BEVs) (which have had a lot more money poured into them over the years). Hydrogen is also a more inefficient fuel than electricity supplied directly to a vehicle: significant energy is lost in the process of electrolysing water to make hydrogen, chilling and transporting that hydrogen, and then converting the fuel back into electricity. Tom Baxter, a lecturer from the University of Aberdeen, estimates it is only about 38% efficient.

Other issues include the fact that hydrogen is both corrosive and highly flammable, making it complicated to transport without converting it to, for example, ammonia or methanol. Also, just as the electricity that powers BEVs is not necessarily 100% clean, neither is hydrogen: it depends how and where it is made. Only 0.1% of the hydrogen currently produced in the world is made from renewable electricity, according to a 2021 analysis from Fitch Ratings; the vast majority continues to be made from carbon-intensive steam methane reforming.

“Directly electrifying trucks will always require half as much electricity as those running on green hydrogen,” concluded Fedor Unterlohner, from campaign group Transport & Environment, in a 2021 study. “Battery-electric long-distance trucks and trolley trucks will most likely be the most cost-effective way to replace the vast majority of today's diesel-powered vehicle fleet,” he predicted.

Swedish truck giant Scania is one company that has prioritised the development of BEVs. The company is more committed than most to decarbonising. It has targets verified by the Science-Based Targets initiative and has committed to net zero by 2040 across its operations and products by signing the Climate Pledge. Scania says it has invested some money in fuel cell technology, but its strategy focuses on a range of BEV and hybrid trucks.

A combination of the two

Many now believe the future will see a combination of BEV and FCEV trucks. “Often we hear a 100% electric scenario compared with a hydrogen scenario, but from the point of view of consumers, it will always be desirable to be able to choose [...] depending on their needs,” says Felicia Mester, from industry group Hydrogen Europe. Mester adds that hydrogen fuel cells will become vastly more competitive as companies invest in the technology and hydrogen supply chain in the coming years.

By 2030, 25% of new truck sales in Europe will be BEVs and 10% FCEVs, estimates a 2021 study by automotive consultancy Berylls Strategy Advisors. However, those proportions could change if green hydrogen is scaled up, it adds.

“Every car manufacturer runs a diesel line and a petrol line, each of which has their advantages depending on customer needs,” says H2 Green’s Johnson. “This is how it will be with fuel cells and [battery] electric trucks.” Indeed, while there were only five FCEV models on sale as of November 2021, a further 11 are expected by 2023, with the likes of Volvo and Daimler developing the technology alongside their electric range.

For Anderson at Imperial College Business School, the uncertainty around which fuel source may end up dominant does not necessarily threaten the stability of future supply chains. “The best way to protect our supply chains is to embrace the uncertainty of different technologies and maintain a course that can provide a nimble response to any disruption,” he says.

The development of the hydrogen economy will support the fulfilment of decarbonization objectives, particularly for those sectors that are difficult to electrify, such as heavy industry, long-distance trucking, shipping, and aviation. GlobalData's Hydrogen Service tracks investment in the hydrogen sector, and provides you with: For more information, and to download sample pages from our quarterly market analysis, including a summary of the active and upcoming low-carbon hydrogen capacity by region, please enter your details.
by GlobalData
Thank you.Please check your email to download the Whitepaper.
Topics in this article: Electric Vehicles, UK