Climate change is a global problem. Every nation will have to transition its energy system away from fossil fuels to meet net-zero ambitions. If one country does not succeed or fails to engage, everyone will lose out.

The G7 countries, meeting in Cornwall, UK, this week, have more responsibility than the rest of the world to ensure they play their part in rapidly bringing down greenhouse gas emissions and bringing online renewable energy technologies. They have historically produced the greatest share of emissions and are also among the wealthiest nations in the world. With collective GDP worth 40% of the world’s total, they have the greatest capability to lead the energy transition. 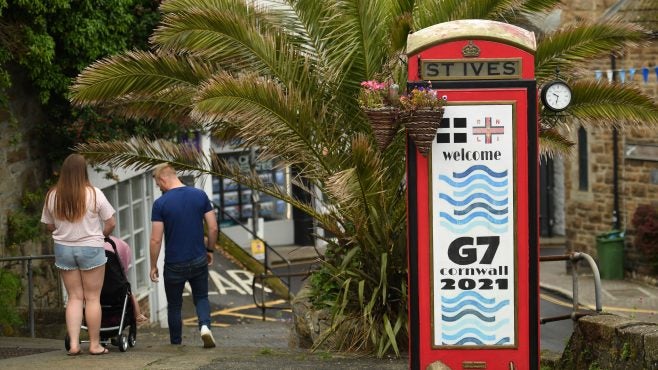 A phone box with a welcoming message to the G7 is seen in St Ives, Cornwall, ahead of the June 2021 summit. (Photo by Oli Scarrf/AFP via Getty Images)

“It is a question of equity,” says Lucile Dufour, senior policy advisor at think tank the International Institute for Sustainable Development. “We cannot expect emerging economies to reduce emissions as quickly as the G7, which have a much greater historic responsibility for climate change.”

Taking place in the same year as the crucial COP26 climate talks and amid warnings that the window we have to tackle climate change is growing ever narrower, hopes are high this week’s meeting can achieve an ambitious pro-climate consensus. Reports of a call by the UK for a new “Marshall Plan” – named after the US economic programme that helped rebuild European economies after the Second World War – suggest at least some political willpower to step up the climate fight.

Net Zero
Covid-19: Sub-Saharan Africa has yet to realise its renewable potential

To mark the occasion, Energy Monitor has analysed the latest climate pledges of countries attending the meeting. The good news is that all seven nations have committed to net-zero emissions by 2050. They have also all submitted updated Nationally Determined Contributions (NDCs) – interim climate pledges that are required every five years under the terms of the Paris Agreement – which are more ambitious than their 2030 emissions reduction pledges.

“The fact all G7 nations have net-zero 2050 pledges, and have updated their NDCs, is pretty remarkable,” says Dufour. “A year ago we were certainly not in this position.”

The leaders of four other countries – Australia, India, South Korea and South Africa – have also been invited to the meeting, in a development that many see as an opportunity to further address the climate challenge. The core seven nations “can show how they are willing to support emerging economies like India and South Africa’s transition to clean energy”, says Alex Scott, geopolitics lead at climate think tank E3G.

The climate pledges of the four guest nations appear worse on paper than those of the G7. Australia and India have failed to even begin discussions around putting a net-zero target in law, and all the countries have seen a significant rise in emissions since 1990.

In the case of India and South Africa at least, such an understanding fails to account for a ‘fair share‘ of emissions. They have a much smaller historic responsibility for climate change, lower purchasing power and other economic priorities like pulling their populations out of poverty. Emissions produced per capita are two tonnes of CO2 per person in India, compared with around 16 tonnes in Australia, the US and Canada.

Climate ratings organisation Climate Action Tracker believes India’s policy trajectory, when fair shares of emissions are considered, is compatible with the world warming by 2°C – an achievement none of the other ten other countries can match.

The US’s fair share target would require it to reduce its emissions, both domestic and abroad, by 195% on 2005 levels by 2030, say the 175 climate organisations that founded the US Fair Share Project. This means the US, which is responsible for around 28% of total historic emissions, would have to decarbonise its economy by 70% by 2030 and, at the same time, invest significantly in emissions cuts in other countries. Its current plan is to cut domestic emissions by 50–52% below 2005 levels.

The energy transition is multifaceted, with heating, transport and industry needing to be decarbonised. Countries everywhere will have to massively scale up their renewable power capacity to clean up and grow their electricity sectors to meet the energy challenges of a net-zero world and a world population of 10–11 billion.

Among the G7, Canada and Germany lead the way for transforming their electricity systems with their 2020 electricity capacity sourced 67% and 62%, respectively, from renewables. Canada is blessed with a natural landscape that has allowed hydropower to dominate its supply, while Germany has long been a leader for solar and wind in Europe.

Japan and the US admittedly have the largest gross electricity supply that needs to be transformed, but they are also the two wealthiest countries in the G7 with massive industrial sectors that, with the right direction, would be capable of spearheading the global energy transition.

Even with renewables growth in many countries, emissions continue to rise. In 2019, the UN said global emissions needed to fall by 7% each year this decade. Amid the Covid recession, emissions dipped by around this amount in 2020, but they will shoot back up by 5% this year, predicts the IEA.

Faced with this challenging context, there are several areas where the G7 nations could boost their credentials to firmly establish themselves as climate leaders.

The numbers do not yet account for the $6trn worth of stimulus packages Biden is attempting to get through Congress, or the €672.5bn ($818bn) EU Recovery and Resilience facility. But commitments so far do not bode well while industry experts are calling for a massive scale-up in clean energy investment.

Elsewhere, some G7 nations are still investing heavily in new fossil fuel extraction, despite the IEA saying this support needs to end in 2021 in its recent 2050 net-zero pathway report.

Oilfield data from GlobalData shows Canada, the US and UK all have operating or planned oil fields set to continue producing billions of barrels of oil into the 2070s, 2080s and 2090s.

President Biden has issued a moratorium on issuing new permits to drill federal lands, but UK and Canadian policy is to continue extracting as much as possible from both undeveloped and developed fields. An April 2021 report warned that planned Canadian oil and gas production between 2021 and 2050 would exhaust about 16% of the world’s remaining carbon budget.

Meanwhile, on the international front, between 2017 and 2019, G7 members provided an average of $86bn in international public finance for fossil fuels versus $21bn in support for clean energy, shows data from NGO Oil Change International. In 2019, the US Export-Import Bank made the second-largest payment of the period, a $5bn loan to support a natural gas terminal in Mozambique.

In May, G7 environment ministers announced they would end international public financing of coal by the end of 2021 – but in reality, other than Japan, governments had largely already stopped investing in coal. Only the UK has officially adopted a pledge to also stop financing oil and gas.

In contrast to funding fossil fuels, one of the pillars of the Paris Agreement was a commitment from wealthy nations to provide £100bn in climate finance to developing countries every year from 2020. This commitment has not yet been realised, and is further put at risk by moves such as the UK’s decision to cut international aid.

“The UK is on very shaky ground,” says Scott. “It needs to reinstate its 0.7% GDP target for international aid. The G7 should form a comprehensive package of leveraging public and private finance to help meet that $100bn target and help countries recover their economies in a way that accelerates the transition to clean energy.”

G7 nations have made relatively good progress with domestic emissions reductions and climate pledges, but all eyes will now be on Cornwall to see whether leaders back up their words with more decisive international action.