Report after report demands sweeping change to get the world on track to net zero, while offering reassurances there is still time to meet the Paris Agreement commitments. However, energy investment is way off track to make this vision reality and worryingly the investment gap was already growing before the Covid-19 pandemic struck.

Total annual energy investment will have to surge from the current rate of $2.3trn to $5trn by 2030, increasing global GDP by an equivalent of 4% in the process. That is what the International Energy Agency (IEA) has called for in its Net Zero 2050 Roadmap, published in May 2021. The agency adds that annual investment in networks and grids will have to increase from $260bn today to $820bn by 2030. 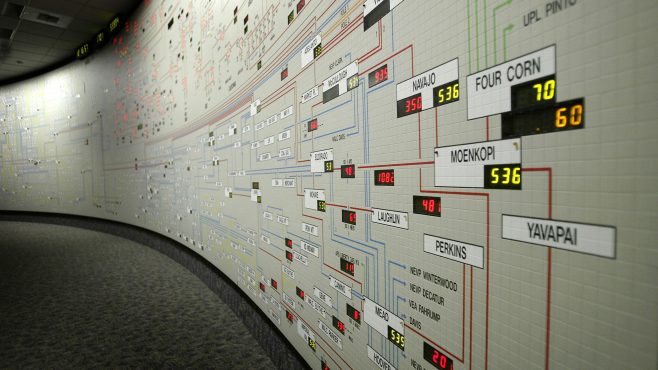 A map of California’s power grid is seen in the control centre of the California Independent System Operator (Cal-ISO). (Photo by David McNew/Getty Images)

Meanwhile, the International Renewable Energy Agency (IRENA) projects in its own net-zero report that overall global energy spend through the period 2021–50 must increase from $98trn to $131trn. In addition, $24trn must be redirected from fossil fuels towards clean energy.

Governments have a long way to go to meet this challenge. And, most worryingly, energy investment trends are going backwards.

This fall is not a signal of wider economic malaise – since 2015, GDP had been growing until it was hit by Covid-19 last year, and while investment in renewables has been more stable, dropping only a fraction from $312bn in 2016 to $311bn in 2019, this is a far cry from the scale-up that is required.

The Covid-19 crisis has also pushed back the development timeline for some major renewables projects, according to the IEA. While post-pandemic stimulus plans like the EU’s €672.5bn ($820.57trn) Recovery and Resilience Facility and Biden’s $4trn plan for the US sound impressive, they are still unlikely to cover the energy spending increase needed to reach net zero.

Money for both packages will be spread over the best part of a decade, and only part of it – 37% in the EU’s case – has to be spent on green projects. The plans are ostensibly focused on “building back better”, but they are often less green than many hoped for and target sectors beyond energy. The massive investment increases highlighted by the IEA and IRENA are for the energy sector alone.

Every year, a portion of existing energy-related stock is retired or replaced. The speed of this process, says the IEA, is a major determinant of investment flows. If fossil fuel infrastructure is retired more slowly, and if additional renewable capacity is only being added to meet increased energy demand (rather than replacing what is already there), the clean energy transition risks being held back.

“Especially in most of the US and Europe, the electricity system is over supplied with capacity,” says Mike Hogan from energy advisory group the Regulatory Assistance Project. “That means that at the moment there is just no need for investment in the amount of new, clean capacity contemplated. Unless someone does something to force the existing capacity to retire, or ring-fences market demand for more energy from clean resources, then this situation is unlikely to change.”

In Europe, countries like Sweden, Belgium and Austria have already phased out coal from their power systems, but others, including Hungary and Slovakia (phase-out date 2030), Germany (2038), Poland (2049) and Czechia, Bulgaria and Croatia (no date) are slower and often more reluctant to do so.

Europe’s power sector transition is nonetheless further along than other parts of the world. “A lot of [European] countries are set to be carbon neutral in their power sector by 2030,” says Kristian Ruby, secretary general of Eurelectric, the European electricity industry body. “This is the case for Portugal, Denmark, Norway, Switzerland and Austria. Everyone I speak to in the industry believes we are in accelerated mode.”

Indeed, the retirement rate of coal plants in certain countries is an indicator of Europe’s relatively advanced pace in transforming existing energy systems. A similar trend can be seen in the US to a slightly lesser degree.

These figures suggest any transformation of the Chinese and Indian power sectors is less far along. Investment in energy in these countries is in building new capacity to fuel their rapidly growing and industrialising economies. Europe’s more mature, slower growth economies offer more scope for investing to replace existing infrastructure.

Trends in renewables investment can be a poor indicator of the pace at which new generation systems are being installed, however. This is because the price of solar and wind has plummeted over the past decade, by 89% and 70%, respectively.

Money invested in renewables today will go a lot further than a decade ago, in terms of capacity additions. The $298bn invested globally in renewables in 2012 is equivalent to $210bn at 2019 rates – while actual 2019 investment stood at $311bn.

This is a marginal difference, however, and largely irrelevant when compared to the massive changes needed. In addition to investment in power generation, electricity networks will also need to be upgraded.

Do not forget networks

The global trajectory for investment in networks is far from encouraging. In 2019, global investment in electricity grids declined for the third consecutive year, by 7% compared with 2018 levels. The IEA estimates that investment fell by a further 9% in 2020 during the pandemic.

“It is a very concerning trend,” says Eurelectric’s Ruby. “Investments in physical infrastructure and the physical parts of the distribution grids is declining – and that is a huge problem.”

Data again shows a disparity between Western countries’ network investment rates and those of emerging economies, including Africa.

In Europe, solar and wind capacity grew by 105.1% between 2012 and 2019, and this was matched with a 16.5% rise in annual network investment over the same period. In India, in contrast, solar and wind capacity grew by 282%, but annual network investment fell by 6.2%. The data suggests India is investing heavily in additional generation, without necessarily ensuring plans are in place for managing the clean transition of the entire system.

Even in the US, where annual network investment increased by 51% over the same period, there are concerns policymakers are failing to envisage how investment could be best utilised to adapt the whole system.

“The biggest challenge I see is to change the mindset of how the electricity network is supposed to work, to move from total central planning, operation and control to a decentralised system,” says Lorenzo Kristov, former principal of infrastructure policy at California’s main grid operator, California ISO.

In Europe, approximately one third of EU’s grids is over 40 years old, states a recent study from Eurelectric. This share is likely to surpass 50% by 2030 and the authors estimate grid investment must be ramped up by 50–70% this decade compared with the previous ten years.

To make these changes, governments and businesses will need access to capital. Public finance is arguably more important than private investor trends given that over 95% of investments in the power sector are either made directly by state-owned entities, or are in response to specific incentives established by regulation, says the IEA.

However, the agency adds in its most recent Energy Investment Outlook that policy signals are still “not leading to a large-scale reallocation of capital to support clean energy transitions”. This lack of energy capital is a problem facing all nations, from emerging economies to supposed green leaders.

“[The German government] must at least triple the annual expansion rates for renewable energies to avoid a green electricity gap,” says Claudia Kemfert from German think tank DIW Berlin. “This is not only because Europe has tightened its climate targets [to 55% below 1990 levels by 2030], but also because the German government is significantly underestimating future electricity demand.”

Nevertheless, a lack of available finance is a particularly acute in smaller economies in the Global South. Not only do these countries lack resources to invest in an energy transition, but they are often still trying to develop their economies and pull their populations out of poverty.

Downward investment trends are often more profound in these nations: electricity network investment, for example, fell from $95bn in 2014 to $57bn in 2019 in territories excluding the US, China, India and Europe.

Emissions from developing countries are relatively low. Africa produces around 3% of the world’s emissions, says the UN – but they too want to develop.

For the world to reach net zero, these countries must leapfrog fossil fuels straight into the renewable energy age, just as many countries in Africa did with mobile phones. The IEA’s Net Zero 2050 report emphasises the challenge of “providing electricity to around 785 million people that have no access and clean cooking solutions to 2.6 billion people that lack those options”, while slashing global emissions.

One of the pillars of the Paris Agreement was a commitment from wealthy nations to provide £100bn in climate finance every year from 2020 – a commitment that has not yet been realised, but some nonetheless suggest is now gaining some traction.

“The technology and business models exist. What is needed is supportive policies or regulations and investment to bring these solutions to scale.”