G20 governments have continued to invest billions in fossil fuel projects in developing nations, despite commitments under the 2015 Paris Agreement to try to limit the average global temperature rise to 1.5°C above pre-industrial levels.

Between 2013 and 2019 – the last ‘normal year’ before global capital flows were disrupted by the coronavirus pandemic – only France directed more public energy finance towards clean energy than fossil fuels in Africa and the Middle East. The share of overall energy funding directed towards fossil fuels also increased. Indeed, there is little sign fossil fuel financing is being wound down, shows a database compiled by the NGO Oil Change International (OCI). 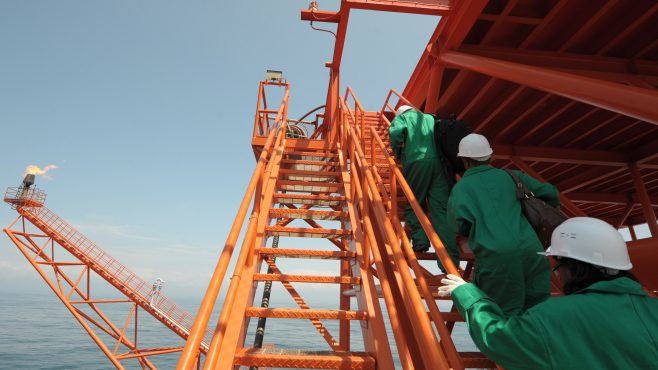 Data for 2020 is incomplete, but interviews with researchers and analysis of domestic Covid recovery packages and policies suggests a shift in public policy towards clean energy projects. The magnitude of that shift, however, seems underwhelming, with only the UK committing to ban international fossil fuel financing.

“Countries are not living up to their commitment to align financial flows with the low-carbon transition,” says Laurie Van Der Burg, an analyst at OCI. “This is an explicit commitment made in the Paris Agreement.”

OCI collects energy funding data by analysing, at a project level, all trade and development financing announced by individual institutions. The NGO tries to “avoid any assumptions”, says analyst Bronwen Tucker. If unable to verify a particular project, OCI ignores it, meaning the figures presented are likely to be an underestimate.

Between 2013 and 2019, G20 nations invested $180.2bn in energy financing in Africa and the Middle East. These regions are the focus of this analysis to provide the greatest indication of how government money from wealthy countries is being spent in developing countries.

China is recorded as having provided the most financing overall, spending $32.4bn on fossil fuels and $12.9bn on clean energy. Japan and South Korea come next in terms of fossil fuel financing, providing $23.6bn and $22bn, respectively, but both countries invested significantly less in clean energy as a share of total spending than China. Japan spent $4.2bn, while South Korea spent just $500m.

The largest example of international financing over the period is a $6.9bn development finance loan from the China Development Bank to Angolan state oil company Sonangol in 2016. In 2019, the US Export-Import Bank made the second-largest payment, a $5bn export credit loan to support a LNG liquefaction terminal in Mozambique. The biggest clean energy financing is a $4.9bn export credit loan from China’s Export-Import Bank in 2017 to finance the 3,050MW Mambila hydropower plant in Nigeria.

Payments recorded by OCI are from export credit agencies (ECAs) or via development finance institutions (DFI). ECAs finance companies’ international exports and are located in the same country as the exporting company, while a DFI directly supports economic development projects in other countries on a non-commercial basis.

The amount of public fossil fuel financing being directed to developing nations is “certainly not Paris aligned,” says Tucker. Emissions from burning oil, gas and coal in already-operating fields and mines would likely exhaust a 1.5°C and 2°C carbon budget, says OCI analysis of data from the Intergovernmental Panel on Climate Change and energy consultancy Rystad.

G20 nations investing billions in fossil fuel exploration, extraction and infrastructure in the developing world will lock in even more emissions for decades to come. Alternatively, if countries scale up decarbonisation efforts, public investors risk being left with stranded fossil fuel assets that do not bring the expected returns.

“A lot of public institutions loaning money are operating on an old-fashioned risk model,” says Tucker. “They are loath to implement new risk assessment frameworks to adapt to how the market is changing.”

The continued international financing of fossil fuel projects is the result of “sheer inertia” in government departments of wealthy countries, says Michael Grubb, professor of energy and climate change at London’s UCL. The financing is inconsistent with the Paris Agreement and climate science, he says. “There is an unholy alliance between countries doing what is in the interest of established domestic industries and wanting to buy access to countries’ fossil fuel reserves,” says Grubb. “It is likely a lot of these investments are going to turn out to be bad investments in the long term.”

Energy Monitor’s analysis only looks at where public finance is going, excluding the vast sums of money private financial institutions are directing towards fossil fuels.

“We know the 60 largest banks have invested close to $4trn in fossil fuels since the Paris Agreement,” says Asad Rehman from the anti-poverty charity War on Want. “Those private banks are all in the world’s richest countries, and their investment mandates are shaped by the fiscal policies of each government.”

Public finance is often given at lower rates of return and with lower interest rates, and boosts investor confidence, even in riskier projects. “Governments defend their policies by saying they are following the will of the market,” comments Van Der Burgh.

“Governments have been largely shifting away from coal, but at the same time  increasing their support for gas,” says Van Der Burg. “This is similarly inconsistent with limiting global warming to 1.5C.”

Investment as a development model

Public finance bodies often justify continued support for fossil fuels by saying it is necessary to aid the development of the world’s poorest nations, but the data shows that the countries receiving most money from the G20 tend to be wealthy nations with significant oil and gas reserves.

Japan gave the most money to the UAE, providing $7.66bn worth of export credits and $1.1bn of development finance to support the country’s oil and gas industry. In all, just 3.4% of energy finance to the country went towards clean energy.

In Africa, Egypt and Mozambique received most international G20 financing – $14.9bn and $13.3bn respectively. Both countries also have significant oil and gas reserves of 26.3bn and 18.5bn boe, respectively.

“Wealthy nations are investing as if resource extraction is the only path to deliver development,” says Rehman. “It is only with extraction that a lot of countries are able to attract foreign investment.”

Governments argue they fund fossil fuels to tackle energy poverty in developing countries, says Rehman. “It is certainly an immense issue,” he comments. “Around half of the world’s population does not have access to electricity or clean cooking.” However, evidence suggests that investing in fossil fuels fails to address energy poverty and instead drives “deep environmental and economic injustices,” he says.

“In very oil-dependent countries like Nigeria, fossil fuel extraction has neither materially benefited the majority of its citizens or reduced energy poverty,” comments Rehman. The impact of prolonged low oil prices on Nigeria’s economy has prompted the World Bank to predict that 15–20 million Nigerians – around 10% of the country’s population – will be driven into poverty (living on less than $1.90 a day) by 2022.

However, the situation is not as simple as wealthy nations imposing their business interests or climate ambitions on the global south. As Mikaela McQuade, a senior analyst at political risk consultancy the Eurasia Group, says, many developing nations with energy-intensive economies want to chart their own economic and decarbonisation paths.

“The developed world had the opportunity to develop as it wished, which was very energy intensive,” says McQuade. “Countries want to develop in their own way. There is often a very firm political reaction of: ‘You can’t lecture us on what our development path looks like. All you can do is fund it’.”

While bilateral energy investment has followed a trajectory of prioritising fossil fuels, since the Paris Agreement the share of finance for fossil fuel projects from multilateral development banks (MDBs) has fallen significantly. In 2015, MDBs directed 70.2% of funding to fossil fuel projects, 68% in 2016, 22% in 2018 and 19.5% in 2019.

“Multilateral banks appear to be taking [in] the bigger picture,” says Grubb. “They tend to be under more pressure in terms of transparency. This makes them part of the international system and conversation in a way a lot of individual governments don’t have to be.”

OCI’s Tucker nevertheless maintains that any progress is insufficient if countries are serious about climate goals. “The graph show MDBs are making steady progress,” she says, “but this is not enough because any finance directed towards fossil fuels is ultimately not Paris aligned.”

The direction of public energy finance data beyond 2019 remains unclear due to a lag in reporting, but based on projects analysed so far, OCI believes there is a shift towards clean energy.

“From what we have seen, there has been a steep drop off in fossil fuels, though as many projects were delayed or shelved this year it is too soon to say whether this is a permanent shift,” says Tucker. Other factors also impact energy funding. The 2020 collapse in oil prices – which for a time dipped below $1 in the US as supply overwhelmed storage facilities – will have put some institutions off investing in fossil fuels in the short term, says Grubb.

Rehman suggests domestic Covid-19 recovery packages can provide an indication of where governments might direct international energy financing in the future. Energy Monitor analysis of national recovery packages in March showed some green stimulus, but also billions of dollars being directed towards fossil fuel-intensive industries with no environmental adaptation strings attached.

“Countries don’t have effective or transformative green policy frameworks,” says Rehman. “We don’t see commitments from governments to match rhetorical claims that will address the climate crisis and the crisis of inequality with concrete investment policies.”

McQuade believes that even if significant amounts of money are still going to fossil fuels, the trajectory is generally positive. “Covid has acted as an accelerant to climate policy and not the obstruction a lot of people suspected it would be,” she says. “The overall investment picture and how green it will be ultimately remains an open question.”

In terms of international energy finance, the European Investment Bank has instigated a fossil fuel funding ban from the end of 2021 and the UK has pledged to do the same. France will end export finance for gas exploration and production projects by 2035, and for oil exploration and production by 2025. The Biden administration has said it is “developing a plan for ending international financing of fossil fuel projects with public money”.

McQuade remains optimistic things are changing, highlighting that world leaders will participate in the first high-level summit on energy under UN auspices since 1981 at this year’s General Assembly. The summit will discuss ways of encouraging clean energy financing and issues around energy affordability and availability.

“The summit will change the way countries are thinking about fossil fuels subsidies abroad,” she says. “It is going to be contentious, especially when you consider every country is in such a different position, but we are moving in a green direction.”