Chile is a gleaming example of a middle-income country embracing the renewables age. It generated more solar power than any other Latin American country in 2019, with its wind power second only to Brazil’s. However, it also has a long history of socio-environmental problems related to resource extraction and energy production, and while the move to clean energy may address some of the pollution issues of coal-fired plants, other problems are emerging. 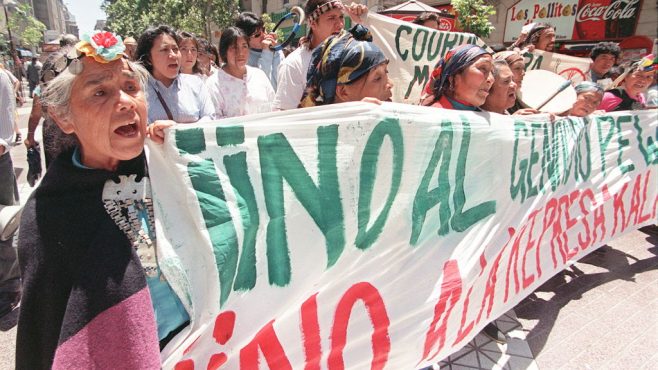 A group of indigenous Pehuenches Indians protest the construction of a hydroelectric plant. (Photo by MACA MINGUELL/AFP via Getty Images)

“In Latin America, the main just transition issues are social-environmental conflicts and the intensification of the extraction economies,” says Violeta Rabi, an environmental sociologist with Chilean think tank Espacio Público. “First it was saltpeter, nitrogen fertiliser, then it was copper, then it was salmon and forestry and still copper of course, and now it is hydrogen.”

Chile is in the middle of a major social transformation. Widespread protests in 2019 led to a referendum on developing a new constitution. This is being drafted by an array of left-wing and independent politicians, and environmental and human rights defenders after a vote last month resoundingly rejected the right-wing ruling party.

Chile has long prided itself on its free market economics, but politics and economics are changing, and this is likely to impact how the country produces its energy – including renewables.

Chile has enormous renewable potential. Its Atacama Desert features the highest solar radiation on continental soil in the world. Further south it has strong wind power potential. It is also starting to tap its large geothermal potential.

The country began focusing on wind and solar power at the beginning of the 2010s, encouraged by huge protests in 2011 against a vast hydro project in Patagonia that was eventually cancelled. Since 2014, its wind and solar generation has increased six-fold and the government plans to double it again from 20% to 40% by 2030.

A focus on renewables makes sense for Chile. It has few domestic fossil fuel resources and imports almost all its coal, oil and gas. For decades it has relied on hydropower as another pillar of electricity production, but widespread opposition has made this increasingly untenable.

Luis Gonzalez Carrasco, a climate and energy economist at the Pontificia Universidad Católica de Chile who has advised Chile’s ministry of finance on climate economics, says regulatory changes in 2015 to give investors certainty were a key determinant in helping solar and wind energy grow.

As in all countries, technical challenges remain. Chile needs to balance an increasing share of renewables on the grid and build out transmission lines from renewable plants. It also has another challenge: its poor record on the environment, community engagement and consent for infrastructure projects has not faded with the advent of renewables.

The problem, says Rabi, is that Chile has not yet made the changes needed to ensure projects will not spark opposition, and still lacks “good planning and regulations”. She says: “A lot of companies assume that because it is clean energy they won't have issues with local communities,” but suggests this is misguided and that renewables projects can bring their own challenges, such as “social compensation, noise [and] changes in traditional ways of life”.

An upcoming report by think tank Espacio Public commissioned by Chile’s minister of energy concludes that current standards for geothermal and wind energy are weak. A particular issue is the large number of smaller wind projects close to where people live, which is sparking opposition.

“In the south of the Biobío region there is a corridor of strong winds,” says Rabi. Projects start off small and impact assessments “assume there are no impacts, but as they start installing one close to the other, cumulative effects are happening”.

These impacts can include the noise of the turbines and frustration that locals were not properly consulted in the decision-making process and are not benefitting from the project. Communities in Los Ángeles in the centre-south of Chile recently opposed the construction of a wind farm by the power company AEG Gener. They argued they were not told about a restructuring of the project that would allow wind turbines to be built near homes.

Felipe Andres Fontecilla Gutierrez, co-coordinator of “Transición Justa LatinoAmericana’, a Chilean initiative to support Latin America’s just transition, says one of the biggest questions is for whom the energy is being produced. Much of Chile’s power goes to mining, while many of its poorest citizens have limited access to electricity, he says.

“A lot of us in the environmental movement are obviously pro clean energy, but we also recognise the necessities of considering clean energy a human right,” says Fontecilla Gutierrez. He insists on the need for a just transition based on “community participation” that gives locals a say in the decision-making process. The needs of communities that have historically been most heavily impacted by fossil energy, including mining and industry, should also be considered, he adds, highlighting they have borne the brunt of much of Chile’s pollution and contamination.

Chile still generates a third of its electricity from coal, but aims to close half of its coal plants by 2025 and all of them by 2040. As in other countries, this leaves the government with the task of ensuring coal workers are not economically abandoned. Some 4,000 workers are employed directly in the coal power sector in Chile, with another 10,000 linked jobs. While this is a small proportion of Chile’s workforce, these jobs are highly concentrated in the country’s 'sacrifice zones', densely industrialised areas with high levels of pollution, and high poverty and unemployment.

Enel, which has called Chile its “testing ground” for the just energy transition, closed two of its coal plants three years early in 2019 and plans to close its third and final plant in 2022. It claims these closures are being conducted in line with just transition principles, with workers offered reskilling programmes for redeployment in another part of the organisation, mainly in the renewables sector. Gonzalez Carrasco believes it is a good lesson that the private sector, as well as the government, “understands its role and tries to contribute”.

However, there are wider issues for communities impacted by coal plants that are often given less attention, such as the risk of infrastructure being abandoned in cities and previous broken promises such as deals to help communities relocate, says Rabi. “There is still work to do to promote a just transition in these territories, for communities as well as workers.”

The country’s 2020 UN climate pledge sets out plans to develop a just transition strategy by 2021 that “protects the rights of the most vulnerable in the process of decarbonising” and ensures the “active participation of citizens”. The strategy is expected to focus on the transition away from coal with local committees generating action plans for those affected by the closure of power plants.

“We are still to see what the government is really thinking about the just transition,” says Gonzalez Carrasco. “It is discursively existing in their plans, but we don't really know what that means. There is no infrastructure for it yet.”

Meanwhile, Chile is betting big on its clean energy revolution. It is among the most forceful bidders to develop a green hydrogen infrastructure – a clean power resource it can export for sale abroad. Its green hydrogen strategy, released last year, aims for the country to produce the world’s most cost-efficient green hydrogen by 2030 and be among the top three global exporters by 2040. It wants to have 5GW of electrolysis capacity under development by 2025, some ten times the expected global capacity by the end of 2021.

“Hydrogen is very promising,” says Gonzalez Carrasco, although he acknowledges question marks around its scalability and the technology.

Not everyone is convinced that targeting huge exports of green hydrogen is the right path, however, especially without stronger safeguards to guarantee local communities will benefit from renewable projects.

“The main question from a just transition perspective is who is benefitting from the generation of energy and why we are demanding that amount of energy,” says Rabi. “If we are not able to respond to those questions, the legitimacy of the projects can be put into doubt for the communities.”

Lithium is another controversial topic in Chile, the world’s second-largest producer of the metal after Australia. With rising global electric car use around the world, the demand for lithium, which is mined from vast salt flats in the Atacama Desert in the north of the country, will only grow.

However, some locals, including indigenous communities, are concerned about the impact of rising extraction on the environment, especially water supplies. Payments for “sustainable development” offered by companies working there have already caused divisions in the community, says Rabi, with not all communities wanting to accept the money. The area risks being turned into another sacrifice zone, she says.

On the front line

After the 2019–20 street demonstrations against inequality, known as the “social explosion”, President Sebastián Piñera reluctantly agreed to hold a referendum on whether Chile should draft a new constitution. Many Chileans have long held that the current one, written in 1980 during the dictatorship of Augusto Pinochet, gives undue privileges to the private sector.

The country said yes in a landslide vote in 2020, and last month selected the members of the assembly who will draft the new constitution. The result was a shock for the governing party, which failed to secure the third of seats required to block radical proposals in the assembly. A large number of the 155 members of the constituent assembly had put forward the environment as a key part their election campaigns.

“We have got a lot of folks that have been at the front lines of environmental movements,” says Fontecilla Gutierrez. “They have spent their lives fighting or resisting plans that have destroyed communities, environments in their communities and jeopardised their human rights.”

There were also 17 seats reserved for indigenous representatives. “Different groups of people that have been invisible historically are finally at the centre of the conversation,” adds Fontecilla Gutierrez.

A socially progressive constitution and Chile’s changing politics could have a significant influence on the country’s attitude to the roll-out of renewable energy projects and respect for environmental protection. The speed of the coal phase-out and energy prices are likely to be hotly debated issues. Higher taxes on the rich and frustration over Chile’s rules on private water rights will also be high on the agenda.

The new assembly is in its initial stages, and the final constitution they agree on will go to a referendum around 2022. Chile also faces general elections this year, however. If the votes for the constituent assembly are reflected in the new president and parliament, more change could be afoot very soon in Chile.