Solar power is the cheapest form of electricity there has ever been and it is only getting cheaper, says the International Energy Agency. The levelised price of the technology plummeted 82% between 2010 and 2019. In 2020, solar electricity was cheaper than fossil fuels in more than 60% of the world, says a new report from NGO the Carbon Tracker Initiative (CTI).

Energy Monitor’s weekly data draws on CTI’s research to show that significant numbers of countries could meet all their power needs by covering less than 0.1% of land with PV panels. The collapse in the technology’s cost means more areas with technical solar potential are now economically viable. Half of the solar and wind potential on the planet now has economic potential, and by the end of the decade CTI predicts it will be over 90%.

The growth rate of solar and wind over the last decade has averaged 21%, and in 2020 it was 19%, says CTI. China, the US and Europe still dominate solar expansion, but massive solar parks are now also being built in the Global South. In Africa, where the greatest geographical potential for solar power lies, solar plants of 500MW or more are being built across Egypt, Ethiopia, the Democratic Republic of Congo, Uganda and elsewhere. 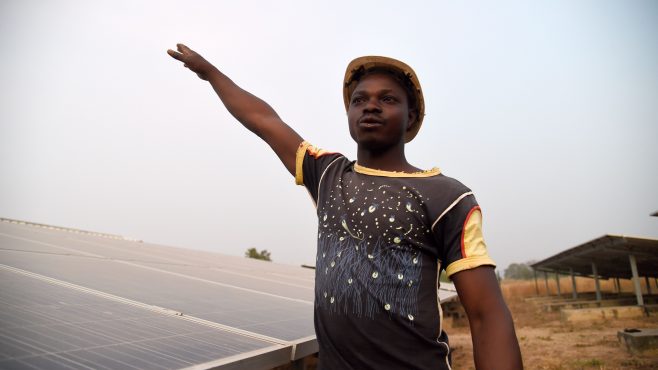 A site engineer speaks about solar panels he has installed in northern Togo, Africa. (Photo by Pius Utomi Ekpei/AFP via Getty Images).

Nevertheless, many African governments continue to favour coal over renewables, citing the fossil fuel’s reliability and its abundance on the continent. The largest coal plant under construction is the 2,800MW Gokwe North Power Station in Zimbabwe, which is being backed by China and is due to open in 2021. There is also a 2,400MW coal plant being built in Nigeria, a 2,000MW plant under way in Ghana, a 1,800MW plant under construction in Mozambique, and many other smaller coal plants set to open in the coming years.

In all, 2,500 new power plants are planned across the continent this decade, but just 10% of the power generated will come from wind or solar, according to a Nature Energy study published in January 2021.

However, this situation will change rapidly, believe the authors of the CTI report. We are entering a “new era of energy”, and Africa, which has more than 39% of global renewables potential, will be “a renewables superpower”, they write.

Topics in this article: Coal, Solar