As the ravages of extreme weather become a feature of daily life, a second and more subtle form of climate-induced demolition is getting harder to ignore in the run-up to COP26. The failure of developed nations to provide adequate financial support for climate adaptation in developing countries threatens to destroy the trust between North and South, says Julian Havers from think tank E3G. This might lead to a breakdown in global climate talks and impede the energy transition that is needed to avoid dangerous climate change, he implies. 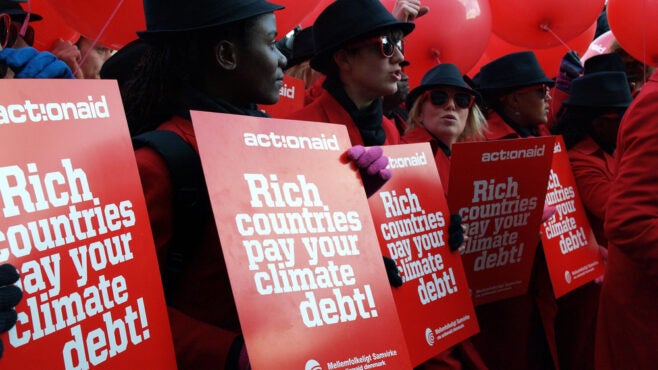 Participants and marchers numbering 100,000 join the UN Climate Change Conference demonstration from the Parliament of Denmark to the Bella Center in Copenhagen, Denmark on 12 December 2009. (Photo by Ricardo Esplana Babor via Shutterstock)

At COP15 in Copenhagen in 2009, developed countries committed to mobilise $100bn (€84.6bn) a year by 2020, to support developing countries as they mitigate and adapt to climate change. The funds were expected to predominantly take the form of public grants channelled through a newly established multilateral Green Climate Fund (GCF) under the UN Framework Convention on Climate Change.

The $100bn pledge is a “key element of trust” in international climate policy, says Havers. Donor countries have thus far fallen short of the target across even the most generous of calculations. In November 2020, the OECD stated that public climate finance reached $62.2bn in 2018; Oxfam estimated a mere $19–22.5bn. 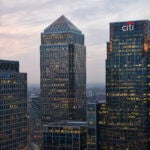 Inconsistencies in the methodologies, categorisations and definitions adopted by donor countries in their official reporting on climate finance have arisen from the “ill-defined” nature of the $100bn pledge, according to analysis in Nature. This includes uncertainties on the appropriate split between private and public finance, and the acceptability of different financial instruments. Most developed countries have treated all financial instruments equally, says the analysis. “A $50m loan appears equal to a $50m grant, in spite of the fact that $60m or more might have to be repaid,” it explains.

Given the global debt crisis, climate finance in the form of loans is not ideal, says Havers’ colleague Iskander Erzini Vernoit. “We must be careful in advocating that countries take on new debt,” he says. In fact, climate finance can mitigate the debt burdens of developing countries by providing concessional finance, which has more generous terms than standard loans, he adds. Developed countries are increasingly opting for loans instead of grants to provide climate finance. Between 2013 and 2018, the share of loans in public finance grew from 52% to 74%, reports the OECD, while the share of grants fell from 27% to 20%.

Yet grants are catalytic for new adaptation projects, which often struggle to get over the initial funding hurdle, Havers says. “With a limited amount of grants, you can pave the way for mobilisation of greater private finance.” A relatively small amount of grant finance is able to mitigate certain investment risks, making projects more attractive to private investors.

The GCF accounted for two-thirds of all multilateral climate finance in 2020, but several key debates have cropped up since its establishment in 2009. Under the fund, any finance provided to developing countries must be “new and additional” to existing development aid. The lack of a clear definition of additionality means this boundary is blurred, however, says Brandon Wu from ActionAid. “Are countries double counting money that goes towards both overseas development aid and climate goals?” Wu asks. He implies that they do.

The GCF was also supposed to provide its funds directly to accredited national institutions, such as local governments or NGOs, but the development of a network of accredited entities has been slow, says Wu. “Rather than having a robust network of local institutions managing this money, the GCF relies heavily on a few primarily international entities such as multilateral development banks (MDBs)," he explains. "That reliance does not help countries access the money."

To meet the necessary accreditation standards many developing countries require support, which lengthens the process, Wu says. The GCF was under a lot of pressure to start funding projects immediately, and “the easiest way to make that happen was through partnerships with well-established institutions like the MDBs”, he adds.

Beyond the GCF, wealthier nations are channelling finance to developing countries via bilateral mechanisms, other multilateral funds and the MDBs. However, there is no formal framework for burden-sharing to meet the collective $100bn goal, says Erzini Vernoit. Countries like the US, Italy and Australia are not pulling their weight, he adds. The US is only contributing $15bn a year, or 15% of the total needed, despite representing almost half of developed countries' GDP and greenhouse gas emissions.

Increased national climate finance pledges ahead of COP26 are “vital” to bridge the investment gap, Erzini Vernoit says. “The COP process is fundamentally about taking action to protect people from dangerous climate change. If vulnerable countries do not see more climate finance from countries like the US, or a coal finance phase-out from China, this undermines the whole process, and therefore any trust in the process.”

One success story to set off the lacklustre performance of the GCF, is the so-called Climate Investment Funds. These were established in 2008 by the World Bank and still have a key role to play in supporting developing countries, says Alexandra Tracy at the Climate Markets and Investment Association. The funds, which operate via the MDBs “as implementing agencies”, were set up as an interim solution, eventually to be replaced by a more permanent financial framework – the GCF. They remain in operation, although there is much debate over whether this should be the case, says Wu.

The UK, US, Canadian and German governments showed clear support for the Climate Investment Funds at the G7 meeting in Cornwall, UK, earlier this year, when they committed an additional $2bn to them. They have proven “an important facilitator” in helping developing countries shift away from coal, says Jurgen Zattler from the German Ministry for Economic Cooperation and Development. Tracy agrees – due to the maturity of the Funds, they are “leading the way” in delivering sustainable finance.

At the G7 meeting, UK Prime Minister Boris Johnson said rich nations need to “build [their] credibility” when asking developing countries to cut their carbon emissions. “That is why,” Johnson added, the UK has “put another £11.6bn into climate finance” by 2025. Of this figure, only £1.44bn will go towards the GCF, however, between 2021 and 2023.

The UK aid budget this year will be more than £10bn, making it “one of the biggest donors in the G7”, said a spokesperson from the UK’s Foreign, Commonwealth and Development Office. The UK says it has “prioritised our aid to target the highest priority global challenges”. However, several not-for-profits, including the Climate Action Network, believe the “new and additional” resources promise has been broken in the provision of the £11.6bn climate finance pledge. The UK’s decision to cut its overseas aid budget from 0.7% to 0.5%, while simultaneously drawing on this budget as its only source of climate finance clearly breaks this rule and will reduce funding going to other priority areas such as healthcare, said Catherine Pettengell from Climate Action Network.

Erzini Vernoit from E3G agrees. “The decision to cut UK aid is profoundly misguided and undermines the government’s position in advance of COP26," he adds. "You cannot expect countries that cannot meet their basic developmental needs to address climate change."

Rebuilding trust and “unlocking ambition” at COP26 depends on the provision of a multidimensional financial package, says Erzini Vernoit. If climate finance is to move from a piecemeal approach to an integrated system, it will require high-level, whole-of-government diplomacy, he suggests, and while the GCF has the highest political profile of all the multilateral funds, it has yet to prove it can handle money at the scale of $100bn a year, says Wu. “It has only received $20bn in the last six years.”

At a ministerial meeting for COP26 in July 2021, the Vulnerable Twenty (V20) countries called for a floor of $500bn over a five-year period, with a higher sum in the final years to offset the existing shortfalls. In response, Germany and Canada will lead the formulation of a plan to ensure developed countries deliver on this commitment through 2025. Havers expects a more integrated approach that recognises the different types of finance being provided. “The strategy must pool different resources, including the GCF and other multilateral funds, and it must contain a greater focus on grants, as opposed to loans," he adds. "A bilateral pledging exercise is not sufficient.”

“The opportunity to make amends for past shortfalls by decisively surpassing the $100bn is still within reach,” says Erzini Vernoit. Advanced economies spent almost $12trn in 2020 alone on Covid-19  support measures, according to the IMF, he explains. “Powering past the $100bn is therefore a relatively small fiscal commitment by comparison.”

The entire global climate architecture is at stake, says Wu. “Developed countries built their wealth by burning fossil fuels. The only way to prevent developing countries from doing the same is to provide the finance for a different developmental pathway.”