The cost of wind power will decline significantly by 2050, reaching a levelised cost of electricity (LCOE) lower than €53 ($62.88) per megawatt-hour (MWh) across all forms of wind energy, says Brussels-based association WindEurope in a new report. 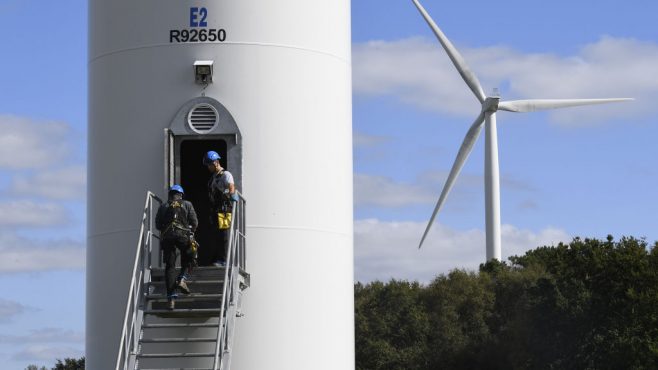 Technicians from multinational electric utility company Engie enter a windmill to inspect it in France in October 2017. (Photo by Damien Meyer/AFP via Getty Images)

Onshore wind is expected to remain the cheapest form of wind power with an average LCOE of €25/MWh for new installations in Europe by 2050, down from €45/MWh in 2020. By comparison, in 2019, the LCOE for the global solar sector was €48/MWh, according to researchers at BloombergNEF.

Most of the cost reductions are attributed to turbine improvements resulting in lower capital expenditure, longer lifetimes and higher capacity factors, such as access to more wind via taller turbines.

The regulatory framework will play a crucial role in delivering economies of scale and increasing investor confidence, thus reducing financing costs, says WindEurope. The report recommends that the EU simplifies permitting processes and sets additional renewable energy targets in line with the ‘Fit for 55’ goal to reduce greenhouse gas emissions by 55% by 2030.