Last week’s big climate policy reveal by the UK government is its first effort to set out how the UK could decarbonise by 2050. Covering all kinds of areas from offshore wind to nuclear power, from the hydrogen economy to carbon capture, the Ten Point Plan for a Green Industrial Revolution has generated plenty of reaction. It takes in a variety of sectors, from public transport to electric vehicles (EVs), aviation to homes and buildings.

Rather than a roadmap to net zero, the plan is best understood as a menu of options – technologies that need to be nurtured and that will, over time, make a greater or lesser commitment to decarbonising the UK.

The plan would not deliver either the UK’s long-term 2050 goal or its nearer-term carbon budgets, shows analysis from Aurora Energy Research, reducing emissions by just 5% over 2023–32 compared with existing policies. “This will not be enough to stop the UK exceeding its fourth and fifth carbon budgets,” which set statutory emissions caps over those ten years, says the consultancy.

“If this is the totality of policy over the next five years, it is not enough,” says Josh Emden, research fellow at the Institute of Public Policy Research (IPPR). “But if it is the start of something that will get more ambitious in the run-up to [next November’s] COP26 [climate talks], then it is a decent start.” 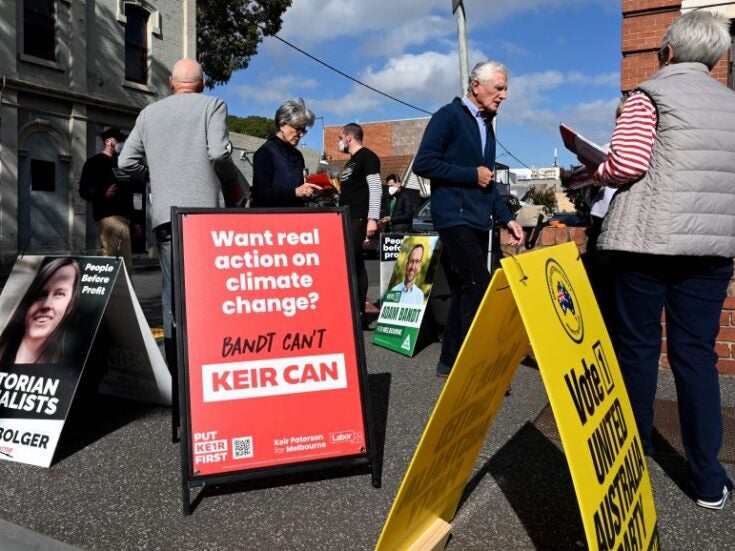 A lack of clarity on how measures will be financed is also an issue – only £4bn of new public spending is proposed within the £12bn of measures. Investors are also unclear about the terms on which they would supply the £30bn of private sector financing the plan says could be leveraged by government money. “This detail really matters,” says Ian Simm, chief executive of sustainability-focused investment manager Impax Asset Management. The plan must be “underpinned by a set of clear and credible sectoral roadmaps setting out the changes which need to be made across the economy”, he adds.

Some of these details could come in the government’s Energy White Paper, expected later this year, and its hydrogen strategy, due early in 2021.

A fair wind for offshore

The UK government has previously made clear its support for offshore wind and the plan includes a goal of 40GW of offshore wind by 2030, as set out in last year’s Conservative election manifesto, up from an earlier goal of 30GW and compared with 10GW at present. To reach this goal, the UK will need to commission 4GW of offshore wind a year from 2025 – compared with an average commission rate from 2011 to 2019 of 0.9GW, calculates Aurora Energy, taking into account capacity contracted but not yet operational.

Success will depend on continuing contracts for difference, government-backed contracts guaranteeing a minimum price for the power generated, in exchange for operators paying the government if wholesale power prices are higher than anticipated. Upping the pace of installation from one turbine every three days to one a day will also depend on direct investment in the UK’s supply chain, argues Aurora Research’s Weijie Mak. “It is questionable whether the supply chain can otherwise respond fast enough,” he says.

The 40GW target includes 1GW of floating wind, one-sixth of the Global Wind Energy Council’s worldwide forecast for 2030, says RenewableUK head of public affairs Nathan Bennett. He too underlines the importance of building out that industry’s supply chain. “I think the government will be surprised at the breadth of opportunities in the sector,” says Bennett. The government has earmarked £160m in investment in modern ports and manufacturing infrastructure. “The government should look to build on that in the next spending review,” he adds.

The second of the ten points sets a target of 5GW of “low-carbon hydrogen production capacity” by 2030 – in line with Germany’s ambitions and just behind the 6.5GW targeted by France. However, while Berlin and Paris earmark €9bn and €7.2bn of government money respectively, the UK government has pledged just £240m to a Net Zero Hydrogen Fund.

This sum is “kind of an insult”, says Marcus Newborough, development director at ITM Power, which manufacturers hydrogen production equipment. The strategy is “UK-centric [and] introspective” and risks squandering the country’s “head start position” in producing green hydrogen given by its enormous potential for carbon-free power from North Sea offshore wind and emerging home-grown industry manufacturing electrolysers, he adds.

Newborough quotes recent figures from the Offshore Renewable Energy Catapult, a UK research centre, which estimates the UK could earn £48bn annually from exporting green hydrogen to the rest of Europe by 2050. That figure is comparable to earnings from the “best years of the North Sea oil and gas industry”, the report says.

Newborough is also critical of the government leaving the door open to ‘blue’ hydrogen, extracted from natural gas. While the plan does not mention blue hydrogen explicitly, it includes discussion of producing hydrogen at scale using carbon capture and storage.

Producing hydrogen at scale from natural gas would involve importing the fuel from sources such as Norway or Russia and capturing and burying the associated carbon. Newborough questions whether this would be supported by the public.

Aside from favouring green hydrogen and providing significantly more funding, Newborough suggests the government could pump-prime the sector by following Germany’s lead and setting targets for green hydrogen production at oil refineries. These refineries already produce the vast majority of hydrogen currently used, and such targets could be a speedy way to decarbonise that production. He would also like to see feed-in tariffs for green hydrogen sold into the UK’s gas grid.

No fewer than three of the plan’s ten points address modes of transport, namely zero-emission vehicles, green public transport, cycling and walking, and shipping and aviation. The most eye-catching commitment is a pledge to bring forward the deadline for banning the sale of new solely internal combustion-engined (ICE) cars to 2030 from the earlier date of 2040. If achieved, this goal would increase the number of EVs on the road by 2040 from 17 million to 26 million, says Aurora Research.

“The 2030 phase-out is a bold commitment,” says Nick Molho, executive director of the Aldersgate Group, which brings together business, politics and civil society to promote a sustainable economy. However, it should sit in the context of a broader integrated transport strategy, requiring government to consider the net-zero target for all transport policy decisions, he says. “Government will need to ask, how do we get the best environmental as well as passenger return for our buck?… That integrated thinking is lacking at the moment.”

The 2030 target also increases the risk that poorer households will be left behind in the race to embrace EVs, argues Mak at Aurora Research. While the total cost of owning a smaller EV is already comparable with an ICE vehicle, that is unlikely to be the case for larger family-sized models until the 2030s, he says. The government may need to consider subsidies for lower-income households, perhaps through their electricity bills, suggests Mak.

One of the thorniest challenges on the way to net-zero emissions is replacing the UK’s 20 million gas-fired central heating boilers. The government plan anticipates the installation of 600,000 heat pumps each year by 2028, supported by a “market-led incentive framework”, and supporting some 50,000 jobs by 2030.

This figure is close to the 630,000 annual installations needed between now and 2050 to meet the UK’s net-zero target, says Emden at the IPPR. That, alongside the household energy efficiency improvements needed to ensure heat pumps are effective, will require £5.2bn in investment each year.

Emden would like to see the government cooperating closely with local government to reach this goal, along the lines of the Heat Networks Development Unit. That body, set up by the 2010–15 Coalition government, provides a model of a central government body successfully working with local councils, he says.

Regulatory and fiscal drivers are necessary to deliver these targets, says Molho at the Aldersgate Group. He suggests subjecting new buildings to exacting energy efficiency standards and requiring they are either equipped with low-carbon heating or are heat-pump ready. The government should also set a date by which all existing homes are brought up to minimum energy efficiency standards. “We also need fiscal incentives that work hand-in-hand with regulatory standards,” he adds, such as reductions in taxes on property purchases for those that meet regulatory targets.

However, these new technologies are yet to be proven at scale. SMR technology is more advanced, with Rolls-Royce leading a consortium that hopes to build 16 SMRs, each generating 440MW of power, with the first operating by 2030. Such plants can help manage the intermittency of generation from renewable sources, argues Professor Robin Grimes from Imperial College, London.

Meanwhile, AMRs, given their high heat output (at 800°C compared with 350°C for SMRs), could be efficient producers of zero-carbon energy vectors such as hydrogen, ammonia, and even carbon-neutral jet fuels. This will enable the “deep decarbonisation” of transport and industrial heat, says Grimes.

“The key thing is to ensure there is sufficient funding to progress the technology process,” he says. He believes the cash set out in the government’s plan, £385m in an Advanced Nuclear Fund, should be adequate for that goal. “The UK has the capability to progress, but what we really need is to exercise the UK supply chain in [SMR] manufacturing,” he says. That will depend on the UK rapidly moving through the design phase and into building the first plants, he adds.

There is much the Ten Point Plan leaves unsaid and many policy innovations are overlooked.

Solar is “the most cost-effective electricity generating technology”, but is “noticeably absent” from the plan, says the Solar Trade Association (STA). “It is disappointing that Number 10 has yet to grasp the opportunity presented by solar in the UK. Not only is it set to be the cheapest power source for years to come, it also provides good jobs and business opportunities up and down the country,” says STA chief executive Chris Hewett.

Emben at IPPR bemoans a lack of discussion of skills training. “That is hugely important for the narrative of the Just Transition,” he says. “To move on from [high-carbon] industries, access to training will be absolutely crucial… We are calling for a lot more funding for adult retraining.”

A more systemic approach to net zero overall is key for Molho, “where policies for decarbonising heat, for example, are considered in parallel with their implications for power sector investment”.

However, the plan’s “positive framing” is welcome, he says. “We have been working for years to persuade government officials to look at the net-zero transition and low-carbon policy as not just a cost but as an investment that can deliver returns in terms of industrial growth opportunities and job creation.”