Before building a digital twin of the Earth, One Concern co-founder and CEO Ahmad Wani was a Master’s student in civil and environmental engineering at Stanford, US, specialising in earthquake engineering.

On a trip home to Kashmir, Northern India, the CEO came face to face with the very real dangers of our physical Earth: the massive India-Pakistan floods of 2014 which devastated more than 2,500 villages across the two countries.

“For almost seven days, my family and I were forced to live on our roof as floodwaters destroyed our community,” Wani said in an interview with Verdict, a sister title to Energy Monitor at GlobalData. “Nearly 85% of the region was underwater, and many people lost their lives and loved ones.

“This inspired me to think more about disaster prevention, advanced warnings, and ultimately climate change, which is the cause of many of these events. 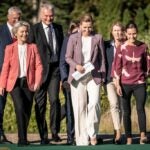 “When I returned to Stanford, I, along with several professors and AI-focused research colleagues, started working to improve models that could more accurately predict a number of climate-related disasters. This ultimately developed into our proof of concept that led to the launch of One Concern in 2015.”

Headquartered in Menlo Park, California, One Concern has raised more than $119m in funding since launching, and is tipped by GlobalData to be one of the next unicorns within the AI space. Its product is a digital twin of Earth which models the effect of natural disasters on communities and the environments around them, both natural and built.

Digital twins are a rising theme in technology, and already in use in sectors such as power, healthcare and rail. Representing the next generation in business information modelling (BIM), digital twins are real-time representations of physical assets, systems or processes that can be built using AI, mixed-reality or a combination of the two.

Making a digital twin of Earth is seemingly also in fashion, with companies Nvidia and Blackshark announcing work on their own digital versions of our world in November 2021. But while these attempts may fall more under metaverse, entertainment or social tags, One Concern’s creation follows the lines of the European Commission’s Destination Earth (DestinE) plan.

Currently under construction, the DestinE twin will model everything from weather forecasting and climate change, to food and water security, global ocean circulation, and even the biogeochemistry of the oceans.

Wani though believes One Concern will go “one step further” with its digital twin of Earth.

“Our digital twin takes into account the vast range of underlying interconnected networks of business-critical infrastructure… to understand how the initial impacts from a disaster might ripple out to cause a cascade of subsequent effects that will exacerbate and prolong recovery,” he told Verdict.

Infrastructure here refers to substations, power lines, seaports, buildings, bridges, highways and more, the “vast amounts of interconnected networks that comprise the foundation of our infrastructure and societies”, which Wani believes are being ignored in climate discussions.

“Everyone else is looking at how climate impacts the building alone,” he says. “Whether it’s safeguarding electric power and water sources or understanding how a disaster might affect the flow of vehicle traffic or supply chains, governments and private enterprises must identify the previously ‘unknown unknown’ variables of a disaster event.”

GlobalData believes that ESG will be a top macroeconomic theme for all sectors in 2022. Climate resilience is a strategic priority for many companies and countries, and Wani believes “leaders must effectively simulate specific scenarios at organisations, institutions and communities, particularly given the exponentially changing climate threats we face”.

“A digital twin makes this possible. We’re able to model disaster scenarios at a granular level, building to building, to inform strategic resilience investment efforts to mitigate the impacts of climate change on businesses and communities.”

Digital twins and climate change: Flavour of the month?

Making a digital representation of Earth is one thing. But producing one that is ‘twinned’ with the Earth so it matches the present and future state of the planet would suggest inter-planetary levels of computing power.

“Given what Destination Earth is trying to achieve, to tackle the biggest problem of the day in climate change, seems to me to require supercomputing power,” says David Bicknell, principal thematic analyst for GlobalData.

“Supercomputers are frequently used for weather modelling. In a few years’ time, they may be using quantum computers to tackle these big, society-benefiting challenges.”

“The challenge with many of these approaches is that they rely on high-performance computers (HPCs) or similar resources which are not cost-effective for most businesses to access,” says David McKee, leading member of the cross-sectoral Digital Twin Consortium and founder of simulation-as-a-service brand Slingshot Simulations.

McKee told Verdict his company is working towards a similar goal to DestinE but one “guided by our clients and users so that it is iteratively built up based on useful data and models rather than building a complex model for the sake of it.”

“The other challenge,” he adds, “is that no one company is going to be able to build the whole system to a reasonable degree of accuracy. For example, when we integrate twins from building interiors across to national scale topography there’s normally multiple toolsets used in building up that model each of which is specialised to the domain that it’s being used in.”

Even a company like Nvidia may struggle, despite having, Bicknell believes, the graphics tools through its chips to be able to represent and simulate climate change impacts on Earth. He also has doubts on the graphics giant’s commitment to the cause.

“About Nvidia and digital twins, there’s a bit of ‘me too-ism’ here,” says the analyst. “Nvidia is making a lot of noise about the metaverse, and its announcement was perhaps nicely timed to coincide with COP26.

“Digital twins and climate change: the flavour of the month,” he continues. “Let’s see where Nvidia is on this in six months’ time.”

In six months’ time, One Concern may be close to going public. Also, unlike Nvidia, it already has a digital twin of Earth to woo investors.

Regarding its creation, Wani says the startup does not use HPC hardware. Instead, it uses auto-scaled compute engines on the cloud to run its models, which generate synthetic information about its infrastructure, creating the digital twin product.

Sustainability is one side of the story, especially after COP26. But as Wani explains, a digital twin of Earth also makes business sense.

“We intend to transform the global financial system to make the world more resilient,” the CEO says, with the hope of a “resilience score” from One Concern becoming the de facto industry standard, along with accurate measures of how long a business will remain non-operational following a disaster.

“We’ll then be able to orchestrate a resilience marketplace where clients can transfer risk through innovative insurance and financial products or mitigate that risk through investments in on-premise solutions, such as microgrids, that can keep a facility operational even if surrounding power utility infrastructure is damaged from a climate-related disaster.”

These types of insights, Wani believes, are of value to a wide range of industries that rely on location-specific assets for their businesses, such as commercial real estate, construction and engineering, manufacturing and supply chain operations.

“Additionally, the financial sector has a vested interest in understanding the impacts of climate change, as measures of resilience to climate change-related impacts must play a role in asset valuation.”

“The insurance industry has (also) expressed a strong interest in these types of insights, as evidenced by SOMPO Holdings committing more than $100m to One Concern.”

SOMPO is a Japanese insurance holdings company which partnered with One Concern’s Japan arm to help local governments in the country.

“Japan faces inherent risks due to more intense, extreme weather as well as seismic risk. Over the past three years, we have been using our digital twin technology in Kumamoto City to identify the critical infrastructure that is first to fail due to typhoons or dangerously heavy rainfall that overflows rivers.”

“Due to the success in Kumamoto City, we’re expanding to six more municipalities in Japan and into the private sector.”

Wani puts the successes of his digital Earth twin down to an AI pipeline involving different algorithms, ranging from statistical models to advanced models, including neural networks.

“We consider different variables across different hazards and control them using a hybrid machine learning (ML) approach based on ground truth data and physics-based models.”

“We collect as much data as possible and simulate scenarios under different conditions to ensure our modelling isn’t one-size-fits-all.”

“AI/ML has helped us validate our models across geographies and to a hyperlocal level, providing customers with more accurate and localised data.”

“(This) hybrid data-centric AI approach is what separates One Concern solutions from others,” Wani explained. “Natural disasters don’t happen every year. And not every natural disaster is the same.

“For example, an earthquake that occurred in California five or ten years ago will have different damage patterns today, for example, and different shaking intensities.”

“And an earthquake that happens in a region with primarily wooden buildings will not behave the same in an environment with concrete structures.”

A digital twin of Earth therefore needs big data as well as big processing for it to work, especially with AI in the mix. Going forward, it is unlikely planet-sized twins will not have some artificial intelligence power behind them.

For its US digital twin, One Concern processed over a trillion data points: data for buildings, power substations, highways, water pipes, hazards and more.

“However, some data sets don’t exist, or the information is too old, incomplete or missing,” Wani says.

In these cases, where the data is no longer valid because it does not account for the ongoing effects of climate change, One Concern fills in the gaps by using AI to generate the missing data.

“For example, many cities don’t know the locations of all their electric poles or substations. So we use a combination of urban planning and ML to construct where critical infrastructure is located and how a weather hazard might impact it.”

For Wani, continued success for One Concern will depend entirely on data.

“The more ground-proof data we get overtime, the more we can improve our ML to boost our climate scenario simulations.

“A digital twin will ultimately allow us to provide near, real-in-time, hyperlocal resilience analytics that can benefit companies and governments’ long-term sustainability and climate resilience efforts.”

Topics in this article: ESG, Interview