“We make all kinds of physical things smarter,” said Jon Lindén, CEO and co-founder of  Ekkono, a Swedish software start-up, at the annual conference of Brussels-based trade association DigitalEurope in February 2021. He went on to talk about edge computing, machine learning, the internet of things (IoT) and why the digital revolution can move the transition to net zero up a gear. 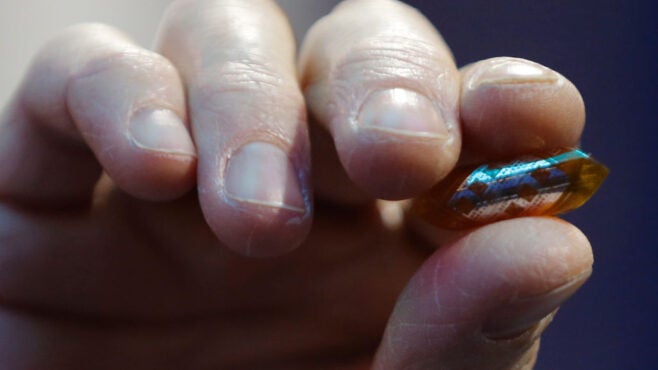 A graphene chip used for the internet of things presented at the Mobile World Congress, the world’s biggest mobile fair, in February 2018 in Barcelona. (Photo by Pau Barrena/AFP via Getty Images)

Nearly 2,000 people dialled in to DigitalEurope’s two-day event, many to hear European Commission President Ursula von der Leyen. She insisted that: “I believe in the power of AI” and forecast “the 2020s will be Europe’s digital decade”.

The Commission has for some time talked about the “twin green and digital transitions”, without going into too much detail about how they actually connect up – but governments and companies are filling in the gaps.

Digital technologies could enable a 20% reduction in global CO2 emissions by 2030, says a recent study. “That is ten times more than we produce as a sector,” it adds. Digitalisation has a big role to play, especially in areas that are traditionally hard to decarbonise, such as manufacturing, transport and agriculture. A fifth of the EU’s post-Covid recovery funds are earmarked for digital transformation (alongside 30% for climate action).

The 2020s will be Europe’s Digital Decade.

To lead in a digital world we need investments – our recovery plan #NextGenerationEU will play its part.

And we need clear, coherent rules. So we are creating a single set of rules for all digital businesses operating in Europe. pic.twitter.com/dmdG8ztrwZ

Yet the link between digital technologies and the environment is relatively new. That it exists at the European political level today is in part thanks to German environment minister Svenja Schulze, who pushed the issue during Germany’s presidency of the European Council last autumn. “An individual’s ability to connect climate and digital is extremely limited,” she said this month. “I see here an enormous need for innovative policymaking.”

Such linkages play nicely into the hands of digital companies that are keen to underline their climate credentials. At the DigitalEurope conference, Microsoft’s Casper Klynge dispelled the “myth” that his sector is “energy demanding”. The cloud is a “much more efficient way of handling data”, he said, claiming it was  “30% to even 93% more efficient than having a set of servers in your basement”. He also brushed away any suggestion that all EU data centres could not be carbon neutral by 2030.

Looking in the mirror

In many ways, the digital and energy transitions are natural partners. AI can help wind turbines adjust to changing weather conditions and homeowners optimise their use of electricity and heating. “Unlike other industries like steel, farming and aviation, digital services are relatively easy to decarbonise simply by switching to green electricity,” Schulze pointed out.

However, there are at least two things to watch out for. One is the sector’s own energy consumption. “Let’s not believe in miracles,” said European Commission director-general for climate action Mauro Petriccione. “It is not today’s worry, but it will be tomorrow’s or next week’s worry how much energy the industry consumes.” Even if it goes entirely renewable, there will be competition for that renewable energy in future.

Second is the question of security and privacy. “Make us feel safe” is Petriccione’s advice. Rejections are not rational, he noted – just look at vaccines – but they are real. A lot of people are nervous about the digital industry, from smart meters to 5G to the cloud.

There are no easy answers to these concerns, but being as transparent as possible is a good start. Schulze would like to see digital companies display the environmental footprint of an online search, or use of the cloud or a streaming service. That could complement digitally enabled scrutiny of other products, such as real-time information on manufacturing conditions and energy consumption. She is enthusiastic about a voluntary registry for data centres in Germany listing their energy consumption.

Business and policy leaders are clear a net-zero world has to be digital to manage the complications of decentralised energy systems and massive changes in supply and demand, for example.

Lindén goes even further. “I don’t think most people have understood the true potential of IoT,” he says. “It is not just a question of connecting things… we can actually extend our relationship with products after they leave the factory.”

Ekkono has developed a machine learning software that enables companies in different industries to deploy self-learning even on small devices.  This enables them to monitor the health of a product through predictive maintenance and extended lifetimes, sell services rather than products, and help customers operate devices in a more sustainable way.

Air conditioners are a good example, says Lindén. For decades, we have optimised their design to make them as energy-efficient as possible. Now machine learning can ensure that every device adapts to its environment and runs optimally for where and how it is used. Ekkono is working with big, well-established companies like ABB, Siemens Energy and Volvo to take the next step in the energy transition.

People have spent the past year realising what is most important to them. The impossible became possible, on many fronts. Now, it is time to see whether the digitalisation that has taken over our lives during lockdown can be embraced by consumers and companies to drive the race to a net-zero economy.