Companies in the EU, UK and US are struggling to mitigate climate change risks, reveals a study from the European Investment Bank (EIB). However, the Covid pandemic may be the impetus they need to start preparing better for unexpected impacts on their core businesses and supply chains. 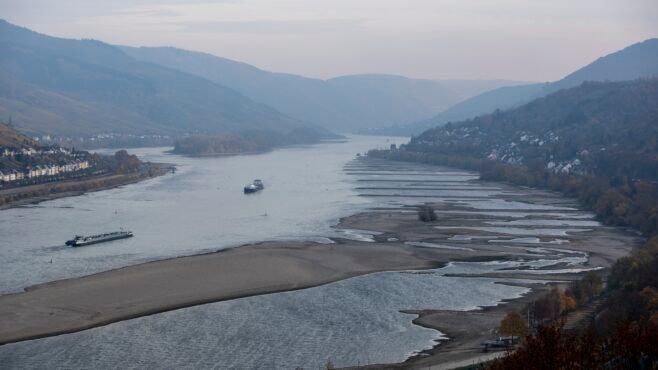 The River Rhine in Germany in November 2018, after a summer heat wave and low rainfall left it with record low water levels. (Photo by Maja Hitij/Getty Images)

The companies – which ranged from SMEs to large corporations – were asked in the 2020 EIB Investment Survey to assess factors that impacted investment in activities aimed at reducing emissions and tackling the impacts of severe weather events, which are set to become more severe and more frequent as the world heats up.

Across the 29 countries surveyed, an average of 69.1% of companies cited a lack of regulatory certainty as an obstacle to addressing the impacts of climate change, 62.6% highlighted the cost of investment activities, while 54.3% underlined uncertainty around new technologies as a core issue.

Countries in southern Europe, where the risk of climate change-induced drought is most severe, were more likely to cite the cost of investment as a major obstacle. Spain and Italy occupied the first two places on the list, with 55.1% and 51.9% of companies respectively citing cost as a major factor.

An average of 52.1% of companies cited the availability of finance as an obstacle to addressing the impacts of extreme weather events and reducing emissions. Meanwhile, 52.2% of companies said the potential lack of skilled staff was an issue.

Hurricanes and dramatic floods hit the headlines. However, the creeping normality of drought across many places in Europe, for example, will hit many businesses hard, leaving them no choice but to adapt.

“Coastal industries like tourism, infrastructure, agriculture and industries that rely on waterways – everything from oil and gas, coal, steel, to chemical industries that are along rivers, will be significantly affected,” says Michael Gloor, climate change lead at reinsurers Swiss Re.

Shipping on the River Rhine in Germany was brought to a standstill in the summer of 2018 after an extreme heatwave dramatically lowered water levels. Industry was severely hampered with German production of chemicals and pharmaceuticals falling 10% in the third quarter. This contributed to a 0.2% drop in German GDP in the same period.

“The impact of climate change is complex to assess and to manage,” says Christof Reinert, head of risk management partners at reinsurer Munich Re. “Evaluating the risks associated with climate change is one of the greatest challenges companies face today.”

Part of the problem is that most companies have only relatively recently started engaging seriously with the need to decarbonise.

“It is only in the last decade that climate change has really become a topic of conversation for many businesses,” says Paul Ramiz, director of risk and innovation at professional services multinational Aon. “The parametric climate change-related weather insurance market, for example, is still embryonic. People are still learning about it – but it is important that these conversations are now happening, especially relating to ESG [environmental, social and corporate governance] requirements.”

Parametric solutions are a type of insurance that covers the probability of a predefined event happening and are detached from losses related to specific assets. “We can look at empirical weather data from the last 150 years,” Ramiz explains. “We can see, for example, if there is an increase in storm activity, which could be a proxy for climate change.”

When it comes to climate resilience, Scandinavian countries were generally least likely to cite any obstacles to dealing with the effects of climate change in the EIB survey. Companies in Sweden, Denmark and Finland, respectively, cited factors as major obstacles only 12.7%, 13.9% and 19.2% of the time on average.

Countries that, on average, were most likely to highlight major obstacles to climate action were also generally those that deemed climate change to have already had a significant impact on business activities, with Spain topping the ranking for both lists.

Responding to the climate risk

Data from Swiss Re shows how catastrophic events resulting from natural causes have increased more than five-fold since 1970.

The growth is not simply due to climate change, but also to the increased concentration of assets in locations vulnerable to adverse weather conditions, such as low-lying coastal regions and floodplains. These locations will become more vulnerable as climate change makes extreme weather events evermore likely.

This is because assets are becoming more valuable, rather than because more assets are going uninsured, says Swiss Re. While adaptation has been slow, companies are waking up to the risk of climate change to their assets. “Companies are preparing more and more for extreme weather,” says Gloor.

He believes the Covid-19 pandemic is also playing a role in increased corporate risk management. “The pandemic is reminding people they need to prepare for severe disruptions, and also that their supply chains can be disrupted by extreme weather events,” adds Gloor.

One indicator of growing corporate awareness of the challenges posed by climate change is the growing list of corporations – including oil and gas majors like Shell and BP – signing up to net-zero targets. By September 2020, 1,541 major companies, with collective revenues of $11.4trn, had signed net-zero targets, up from 500 at the end of 2019.

Aon’s Ramiz adds that, whatever the challenges that lie ahead, the mass migration towards homeworking during the pandemic shows that companies are essentially adaptable.

“If you look at Covid, the extent that companies have adapted their work arrangements would never have been predicted five years ago,” he says. “I have massive faith that industry can meet the challenges ahead.”

Topics in this article: Covid-19