While the switch to electric vehicles (EVs), growth in batteries and increasing expenditure and faith in carbon capture and storage and hydrogen, is all very well and good, moonshot technologies are our only hope of keeping global warming below 1.5°C, believes energy consultancy DNV.

The world is on track for warming of 2.3°C, found the Norway-based company in its latest Energy Technology Outlook (ETO), published last autumn. This conclusion pushed DNV (previously known as DNV GL) to reorganise its business earlier this year, launching an energy systems unit. This one-stop shop will better enable it to help companies and governments get on track to net-zero emissions, claims DNV. 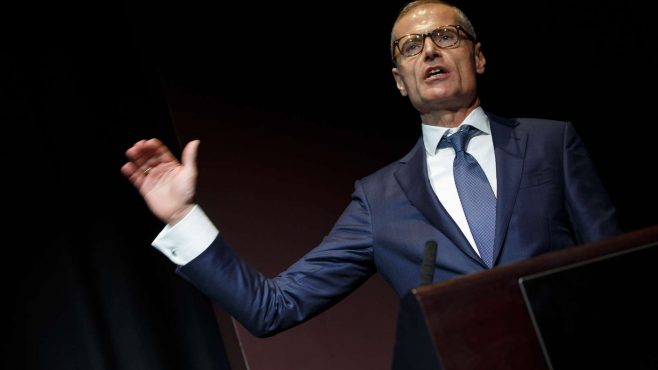 “Over the last few years, we saw the interests of our oil and gas, and power and renewables customers coming much closer,” explains energy systems CEO Ditlev Engel, in conversation with Energy Monitor. “Think of green hydrogen and the competences you need to scale that. We decided the best way to really put the customer at the centre was to develop a more holistic approach.”

“The world needs to cut its CO2 footprint by about 8% a year, which means the effect from Covid-19 last year is something we need to replicate every year,” says Engel. “The only way to do that is to scale at unprecedented speed.”

Rather than presenting a series of scenarios, DNV’s annual ETO proffers a single ‘best estimate’ forecast. “When you look at our ETO, we have scaled technologies to where we think they are going to go,” says Engel. “When I look at that, I get really optimistic about what technology can do.”

DNV spends 5% of its annual revenue on R&D. “A lot of investors are looking to understand what technologies are capable of,” Engel says. “They want to know what market models will support this transition.”

There is “tremendous interest” from corporates in green power purchase agreements (PPAs). “A lot of big corporations are consuming more energy than countries,” says Engel. “They are not [traditional] energy market players, but want to become involved to make sure they are doing their part [for climate change].” DNV has developed InstaTrust, a digital platform that connects buyers and sellers of renewable energy.

Not without oil and gas

In DNV’s future, solar photovoltaic power grows 25-fold and wind tenfold by 2050 compared with today. Together, they are responsible for roughly equal shares of over 60% of electricity generation by mid-century. Fixed and floating offshore wind stand out for their “plunging costs” and technological advances.

Renewable-powered electrification is the main driver of accelerating efficiency gains that outpace population and GDP growth, “such that the world will reach peak primary energy supply in just over a decade from now”.

In addition, the Covid-19 pandemic has brought forward peak emissions, DNV says, and will lead to an earlier plateauing of oil use – it may never again exceed 2019 levels.

DNV is not ditching its oil and gas business, however. “Many oil and gas sector competences are very relevant to renewables and vice versa,” says Engel. He cites floating offshore wind and hydrogen as examples. More generally, oil and gas companies have the scaling-up experience that green technologies desperately need, he suggests.

“Even though we are forecasting a major uptake of renewables, it is nowhere near enough to get us to the Paris Agreement,” Engel says.

Net zero requires more than the “easy” switch from diesel cars to EVs, he adds. Engel argues the need for moonshot projects such as the construction of an artificial energy island in the North Sea that will serve as a hub for offshore wind energy and was backed by the Danish Parliament in February. These are the kinds of projects DNV is also looking to enable.

In addition, the company foresees a growing role for natural gas. “Natural gas will take over as the largest energy source this decade, and remain so until 2050,” its ETO says. Engel confirms: “We believe gas will be an important transition fuel.” He sees a role for it in replacing more carbon-intensive coal, for example.

But the decarbonisation of gas gets off to a slow start, only picking up towards mid-century “when we see rapid growth of blue hydrogen from methane reforming, and of gas with CCS in power and industry,” the ETO says. Just 13% of natural gas used in 2050 is expected to be decarbonised, however.

Aside from how energy is generated and consumed, it is “also important to understand how it will be stored and distributed, and there we see massive needs for investment and understanding”, he adds. “A nice new HVDC [high-voltage direct current] grid can do a lot of stuff if people allow it to be deployed.” In addition, cybersecurity is becoming a “much more important” topic.

DNV is already working with a wide array of “majors”, including renewables giants such as Iberdrola, and oil and gas companies like Total, Shell, BP and Equinor, large utilities in the US, grid operators such as National Grid, Tennet and 50Hz, and OEMs.

“We are not looking so much at where people are coming from but where people want to go,” Engel says. “Everyone needs to decarbonise.” With the recent price increase in the EU Emission Trading Scheme (ETS), “for many companies it is now also becoming a cost issue“, he adds.

Engel believes companies will increasingly need to be able to prove their actions are of verifiable benefit to climate change, not greenwashing. “Customers are already asking how we can help ensure the power they get is green,” he says. “In many organisations, it is becoming a ticket to trade that you need to be able to demonstrate your carbon footprint.”

In its assurance business, DNV has developed “My Story”, a blockchain-powered solution that allows brands to track and communicate a product’s “authentic” story. “Going forward, I can envisage something similar in the energy business,” says Engel. “People need to see it [climate action] verified in a new, different way to in the past.” He also highlights greater pressure for disclosure in financial reporting.

DNV prides itself on its technical expertise and independence. “We can help you understand whether or not you can add another 10GW of offshore wind to your grid and if you can, how much you need to invest,” says Engel.

In his eyes, the biggest challenge is having “policy and regulation to let technology do its job”. His optimism on technology is matched by his pessimism on regulation. Nonetheless, he says Covid-19 proves what is possible “if we really set our minds to something”.

Engel hopes COP26 in Glasgow at the end of the year will deliver a clear action plan. “We don’t need loose, long-term targets but firm, short-term targets,” he says. “The outlook can be tough, but it’s got to be firm. Big investors often worry more about regulatory changes than whether the technology will perform.”

He remains optimistic. “[When I started working in the renewables industry] 16 years ago we thought a 160MW offshore project and a 3MW turbine were really huge, [but] now we talk about 1GW projects and 15MW turbines.”

He also recognises the transition is about more than technology, saying, “It’s a technological, but also a mindset, journey because it requires full energy system thinking and integration.” In addition, one important need to successfully deploy technology is the ability to “connect the social fabric dots at the same time”.

For Engel: “Technology can do it. It’s a question of whether we are ready to take the [societal] consequences of deploying it.”