Global leaders won’t be able to prevent runaway climate change without reducing greenhouse gas emissions from buildings. And to slash the carbon footprint of buildings, policymakers must tackle emissions from fossil fuels burned on-site in furnaces, boilers and water heaters.

Space and water heating account for nearly two-thirds of US household energy consumption. The good news for the prospects for a stabilised climate is that policy experts agree on one of the most effective technologies to decarbonise heating: heat pumps powered by carbon-free electricity.

The elegance of heat pumps as a climate solution, and the explanation for their superior energy efficiency, is that they provide a two-for-one combination of heating and cooling from one unit without fuel combustion. Instead, heat pumps use electricity to draw heat indoors in winter and to expel heat outdoors in summer.

Electrification
Why hydrogen is not the answer to petrostates’ woes 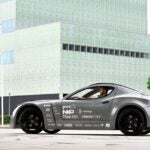 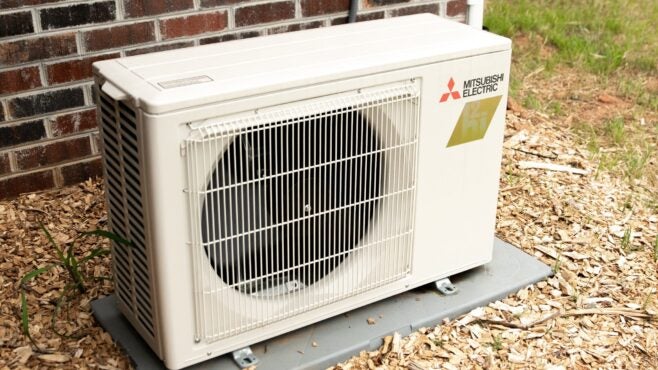 The outside unit of a mini-split heat pump system. (Photo by Habitat for Humanity of Catawba Valley/US Department of Energy)

Heat pumps rely on the air or the ground as the thermal reservoir from which to extract or expel heat, depending on the season. Air source heat pumps are installed as centralised systems in buildings with ductwork, and in individual rooms or zones as part of mini-split systems in buildings without ducts. Ground source (or geothermal) heat pumps transfer heat to and from the earth via a network of pipes or a ground loop.

Heat pumps are up to three to six times more energy efficient than the fossil fuel-fired and electric-resistance equipment they replace. Recent technology improvements have made heat pumps viable even in cold climates, which means heat pumps can be used to decarbonise buildings almost anywhere.

In the US, heat pump installations have increased in recent years, in the absence of a push at the national level to promote the technology, partly because more new homes are all-electric. One in four US homes is all-electric, but 35% of the homes built in the US since 1980 use only electricity. Of the US’s 118 million households, 12 million use electric heat pumps as their primary source of heat, according to the US Energy Information Administration, with about three-quarters of the units installed in the temperate south-east.

“The key feature allowing sub-freezing performance is an advance in variable speed inverter-driven compressor technology, which wasn’t available in mainstream offerings just ten years ago,” write Michael Gartman and Amar Shah, building electrification experts at the Rocky Mountain Institute (RMI), a Colorado-based think tank. This technology basically means that rather than a heat pump being fully on or off, it can operate anywhere in this range by analysing the temperature and conditions inside a building and adjusting its output to maximise efficiency.

Will heat pumps save consumers and building owners money?

Yes, especially when installed in new buildings. Owners of existing buildings will see fuel savings over time. Homeowners who install a heat pump will see the investment pay off when a home is sold, too, according to a recent study.

“Heat pumps offer a feasible and energy-efficient way to electrify space heating,” conclude the authors of a recent Nature Energy paper. The researchers found that across 23 US states, homes with an air source heat pump saw a 4.3–7.1% sales price premium, worth $10,400–$17,000, on average.

“In every city we analysed, a new all-electric, single-family home is less expensive than a new mixed-fuel home that relies on gas for cooking, space heating and water heating,” write the authors.

What about existing commercial buildings? A recent American Council for an Energy-Efficient Economy (ACEEE) study of more than 2,000 existing buildings found that 27% of commercial floor space heated with fossil fuel furnaces, boilers and space heaters can be electrified today with heat pumps with a simple payback of less than ten years. Add energy efficiency investments, incentives and carbon pricing policies and 60% of the same floor space could be electrified with the same payback time. “Electrification of remaining buildings would likely require more aggressive policies or government investments,” the authors write.

It doesn’t appear so. A report published by the National Renewable Energy Laboratory found that economy-wide electrification in the US, including buildings and vehicles, could increase electricity consumption by up to 38% by 2050, but final energy use would fall by up to 21% because heat pumps and other electric equipment are more efficient than fossil fuel alternatives.

In swapping fossil fuel furnaces and boilers for heat pumps, owners of existing homes or businesses would be replacing oil, propane or gas on their utility bills with electricity. As the studies above find, building owners will save money over time in avoided fuel bills.

Even so, electrification must be coupled with redoubled efforts to improve energy efficiency. Reducing a building’s energy demand first with measures such as added attic and envelope insulation or sealing of leaky ducts and windows may enable owners to install a cheaper, smaller-capacity heat pump and reduce the upfront cost of going all-electric. 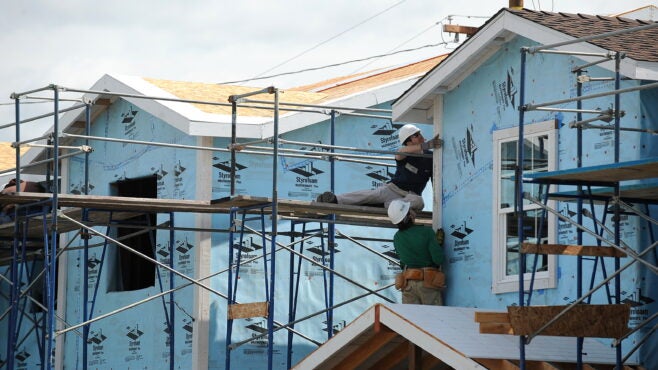 Contruction of energy-efficient homes in Lynwood, California, in 2010. (Photo by Robyn Beck/AFP via Getty Images)

Grid planners and operators, meanwhile, should also be prepared for a new seasonal peak. If single-family homes in Texas swapped natural gas furnaces for electric heat pumps, households would save up to $452 annually on their utility bills, but the state’s power grid would shift from a summer-peaking to a winter-peaking system, according to Austin-based energy research organisation Pecan Street. “The grid could evolve to handle this,” says co-author Joshua Rhodes. “This is not a wholesale rethinking of how the grid would have to operate.”

Yes, and because heat pumps run on electricity, they get cleaner as the power grid does. As many as 70 million US homes and businesses burn fossil gas, oil or propane on-site for space and water heating, says the RMI. In California, a household could reduce its annual emissions by 50–70% and 46–54% for water and space heating, respectively, by replacing fossil gas-fired equipment with heat pumps, according to a 2018 Natural Resources Defense Council study.

California’s 2045 carbon-free electricity and economy-wide carbon-neutrality targets ensure that fully electrified buildings will continue to reduce carbon for years to come. RMI researchers found that if California regulators delayed enacting an all-electric requirement for new construction by three years, until 2025, it would cause three million additional metric tonnes of carbon emissions by 2030 and more than $1bn of unnecessary spending on new gas infrastructure.

Germany’s million heat pumps are estimated to have reduced CO2 emissions by 17 million tonnes, according to BWP, a heat pumps trade association. In the ACEEE commercial buildings study, researchers found that electrifying heating in the 2,000-plus buildings analysed would reduce on-site energy use by 37% and greenhouse gas emissions by 44%.

Increasingly, building standards will expand the market for heat pumps, too.

In California, 40 local governments, including large cities such as San Francisco, San Jose and Oakland, have passed ordinances that require or encourage all-electric buildings in new construction. Officials at the California Energy Commission will soon decide whether to include an all-electric baseline in the 2022 update to the state’s Title 24 Building Energy Efficiency Standards.

In the Australian Capital Territory (ACT), lawmakers amended a law that mandated gas delivery to all new housing developments, which made possible Ginninderry Estate, an all-electric, 100% solar-powered project in a Canberra suburb. More all-electric projects are planned in Canberra, including a hospital, an office precinct for ACT government employees and a business district.

The European Commission’s recently adopted Renovation Wave strategy aims to at least double EU renovation rates to upgrade 35 million inefficient buildings by 2030. The EU’s Strategy for Energy System Integration says the share of electricity in residential heating demand should reach 40% by 2030 and up to 70% by 2050.

The development of the hydrogen economy will support the fulfilment of decarbonization objectives, particularly for those sectors that are difficult to electrify, such as heavy industry, long-distance trucking, shipping, and aviation. GlobalData's Hydrogen Service tracks investment in the hydrogen sector, and provides you with: For more information, and to download sample pages from our quarterly market analysis, including a summary of the active and upcoming low-carbon hydrogen capacity by region, please enter your details.
by GlobalData
Thank you.Please check your email to download the Whitepaper.
Topics in this article: EU, Germany, Heat Pumps, UK, US