Buildings are in the spotlight as the EU contemplates a long, hard winter on the back of an energy price crisis intensified by Russia’s invasion of Ukraine. Already the EU’s ‘Fit for 55’ climate package aimed to double renovation rates by 2030 and pioneer minimum energy performance standards for buildings. The REPowerEU proposals – issued in response to the Russian invasion – complement this with a solar rooftop plan and raise the EU’s overall energy efficiency goal for 2030 from 9% to 13%.

Jessica Stromback is an energy expert who heads up US-based company Joule Assets. She previously founded demand response advocacy group smartEn in Brussels, while acting as chair of VaasaETT, a think tank specialising in demand response.

In the US, Joule Assets works with municipalities on renewables projects. In Europe, it offers financing and strategic support to small energy service companies. Its European work has been funded largely by the European Commission for the past six years, but Joule is now looking for a permanent home – and funding stream – as part of a trade association. Energy Monitor sat down with Stromback to discuss her plans, how Europe compares with the US and what the current energy crisis means for business.

There are many initiatives in the space of energy efficiency and financing. In Europe, what does Joule Assets do that’s different?

Energy efficiency
What is being done to make data centres sustainable? 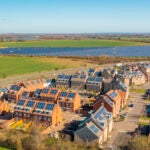 Energy efficiency
Can community energy save lives this winter?
Data Insights
View All

Joule Assets has developed an IT platform called eQuad, which acts as a bridge between small-to-medium [energy efficiency] project developers – the group that has the most difficulty accessing finance – and financial funds and banks.

What’s unique about us is that we are part of a very, very small group that really puts the smaller project developer at the centre.

Can you give an example of how you help small project developers?

In the PROPEL project we have a standardised contract that’s been tested and reviewed by the likes of the European Investment Bank (EIB). It’s ready for use. It’s respected and recognised. Because accountants have looked at it, you can go and negotiate with it.

Because it’s standardised, it also helps with the actual financing. A financial fund is much more comfortable with a contract reviewed by the EIB.

We have tools that help with the processing of projects, too. The eQuad platform can take an engineer’s spreadsheet on energy savings and turn that into something a financial fund can understand. Our tools enable smaller player to access the market. This is a big piece of what’s missing in Europe.

Is this a uniquely European problem?

The US is simpler. Things are much more practical. It's been easy to finance [energy efficiency] projects off balance sheet and have them as a service for decades – which means it’s been a multibillion dollar industry for decades.

That by no means means all buildings in the US are energy efficient, but it does mean when you have a project, it’s not as complicated getting it done. Europe has more accounting rules and standards. All these standards are good, but if you always have to do a lot of reporting, it adds a real weight, especially to small projects.

You still have the problem [of smaller developers] in the US but not to the same degree.

How does the current situation – an energy price crisis coupled with a new push for energy independence – affect energy efficiency projects and their financing?

We are really quite hopeful. It’s the first time we are seeing what could be a seismic shift of several things coming together.

One, the [EU] ESG taxonomy is putting pressure on big companies and banks to prove what they do for the environment. Two, some countries are starting to introduce binding [energy efficiency] standards and attaching conditions to them, like you will not be able to lease your building unless you comply, which really pushes the market. And three, we are seeing severe price increases, which means – sadly, because it causes a lot of suffering – people really think twice about buying something that is not insulated, or an upgrade suddenly looks a lot more attractive.

These three things together, and in particular the political pressure, means we are seeing more movement and a new level of seriousness we just hadn't seen before.

In my opinion, we get stuck in our nice little Brussels bubble quite quickly. A lot of people forget that 40–50% of Europeans live on €1,000, maybe €1,500 a month. In the Italian village where I used to live, which was a middle class – not poor! – village, when it got cold, everyone got sick, and the reason was, nobody could afford to turn on the heating.

I hesitate to say let's just make it expensive for people [and they will use energy more efficiently]. I think we have to be careful about being callous. That’s why I really support what they are doing in Italy, where they have a 110% fungible tax rebate if you upgrade a building. What that means is even a normal, middle-class family can get these upgrades for free and the Italian government is getting more taxes than ever before from the building sector because there is so much activity and no one can do anything ‘black'.

So yes, allow prices to go up but with heart, and give people tools, real tools – not 'go to this website and we'll help you buy a heater' – to help them mitigate the impact of those prices. There are a few companies that own a serious portion of the European building stock. They should not be able to continue to lease it unless they upgrade it.

Do substantial tax breaks for building renovations exist in other countries?

They also exist in Germany, although they are less dramatic there. What’s important is that they are fungible. So, if I’m poor and don’t pay taxes, the company doing the renovation or the fund doing the financing – who do pay taxes – can take the break and I get my upgrade at lower cost. Otherwise, you cut out everyone on lower or moderate income.

And yes, companies will pass on the tax rebate to the final customer, if it’s set up properly, because they want the business.

I went to Italy before Covid and there was no building renovation. The whole sector was dead. I have a lot of friends who are workmen and they were all out of work. I came back this year and everybody is working. Everybody is working overtime, which has made a huge difference to their standard of living. There is wealth being created in jobs for normal, middle to lower-class people, and all these buildings are being renovated to the latest energy efficiency standards because otherwise you can’t get the tax break.

Was the Italian tax break introduced as a response to Covid?

We should have it [a similar tax break] for all of Europe. All countries would end up getting more, not less, tax income because if a significant portion of the population is unemployed – and has been unemployed for years, such as in Spain or Italy, and a lot of the work is 'black' – you bring it all back into the taxable market, employ a lot of people and improve their standard of living. It's a win-win for everyone.

The number one problem has always been uptake. It’s always been that energy efficiency is not important enough for people to focus on and actually get done. The number two problem is financing. That's why governments setting real [energy efficiency] requirements and delivering real [financial] benefits can make such a significant difference. You need both.

So the EU's plan to set mandatory minimum energy performance standards for buildings – part of its 'Fit for 55' package – is useful because it forces energy efficiency up the agenda?

That's right, and then governments have to enforce these standards. Having a standard that’s not enforced is not going to move the market.

We have a lot of work cut out for us. The three priorities I would highlight are enforcement, consistency and simplicity. Nothing is useful unless it’s enforced. It can’t just be some nice sticker. That doesn’t work in this space.

Consistency in support mechanisms is important. Smaller companies can really benefit from access to consistent support and knowledge resources over years. However, entities like ours have to apply for financing [from the European Commission] every two years, but you have to be in the market for a while to help people build their businesses. The EU runs these one-stop shops, but half the time they’re out-of-date or dead because the financing ran out. EU financing for projects like ours is great, but it’s only for two years; then you have to reapply and if you don’t get the money, it all drops off a cliff. Europe could get more value for its money with more consistent financing.

Finally, simplicity. Watch out for making everything complicated. A small company cannot do it then, and for a large company it makes things more expensive. One reason we have multibillion portfolios in the US is that it’s simple. It probably means some projects have been financed that shouldn’t have been, but it works.

In Europe, if I go to a bank, they consider it ‘short’ if the due diligence takes 18 months. If you’re a small company and you have customers waiting, six months is a long time. In 18 months, you’ve lost your whole business. We had that happen to one of our clients. It took a year to do the due diligence, he lost all his customers and almost went bankrupt, and had to get a whole new portfolio of customers once he got the financing in place.

Even if energy efficiency gets the attention and financing it needs, are there the skills in place to get projects delivered?

If you solve the other problems, that problem would solve itself. If there's money in this space, people will learn how to do it. All the workmen in Italy are now learning about energy efficiency because they can earn money with it. Yes, there’s not enough people with the right know-how now, but give them employment for six months and there will be. You can’t do it the other way round. You can’t prepare people for a market that doesn’t exist, nobody has the time, but it’s a problem that will solve itself. Everybody’s smart.