By converting its generation units to run on biomass instead of coal, UK power company Drax has, since 2012, reduced its absolute scope 1 and 2 carbon emissions by more than 85% and is now aiming to be a carbon negative company by 2030.

However, its decision to import ever-increasing amounts of wood pellets from North America and elsewhere in the name of climate action is not without controversy. In conversation with Energy Monitor, CEO Will Gardiner explains why he believes Drax’s model is good for business and the climate. 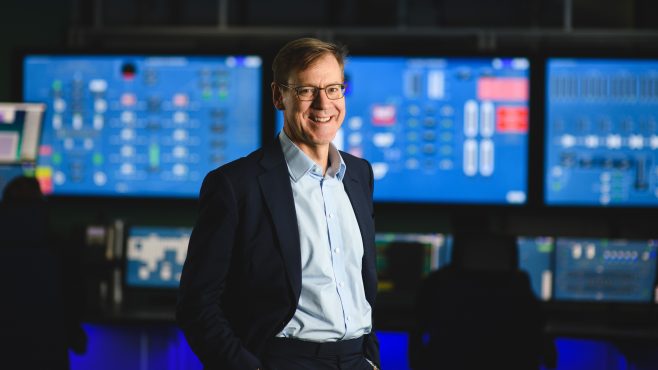 What is the thinking behind Drax’s business strategy?

The company’s purpose is to enable a zero-carbon, low-cost energy future, while creating shareholder value.

You have decided to use biomass to decarbonise your power plant. How does this fit with the UK’s low-carbon targets?

The UK’s path to net zero will need to be based on three aspects.

First, we believe energy systems in the UK will be dominated by wind and solar power. These are the lowest-cost technologies and they are seeing massive growth. They are needed to decarbonise our electricity system to, in turn, decarbonise sectors like transport, and heating and cooling. According to the National Grid, electricity demand could double between now and 2050.

However, solar and wind are not the only solutions, we will also need others, such as biomass, dispatchable storage and clean baseload power.

Second, we will need negative emissions. This will mainly mean bioenergy with carbon capture and storage (BECCS), with direct air capture (DAC) and natural solutions also playing a part. 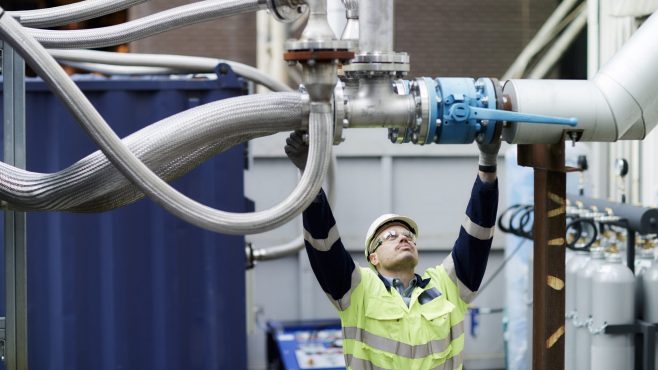 An engineer in Drax’s CCUS incubation area where BECCS technologies are being tested. (Photo courtesy of Drax)

BECCS will be the main at-scale solution. Microsoft, for example, is clear that to become carbon negative by 2030, it will need BECCS. Otherwise, there are a lot of trees to plant and DAC remains more expensive. Microsoft is collaborating with Chevron and Schlumberger to develop a BECCS plant in California.

With BECCS we can create 4, 8 and, in time, 16 million tonnes of negative emissions a year at Drax. We are working with a range of costs, but we think we can achieve this carbon removal at a cost of £100 a tonne of CO2.

Third, we can do biomass in a sustainable way.

Drax uses around seven million tonnes of biomass a year and this is set to increase. Some environmentalists and scientists question whether biomass, especially at this scale, is a solution to climate change.

There is policy consensus under UK law, from the IPCC [International Panel on Climate Change], in US climate legislation and Japanese climate policy that biomass is carbon neutral, but clearly it needs to be done sustainably.

We have a responsible sourcing policy based on healthy, growing forests; we are not decreasing carbon stocks. In the US south-east, where we source most of our biomass, increased demand for wood fibre has helped to increase the growth and protection of forests. Inventories have increased by over 100% since 1950 as more carbon is stored, despite harvests also increasing.

We have our own internal audit to verify that our biomass programme and our supply chains are sustainable, and we are audited by third parties to ensure our biomass complies with stringent standards set by the EU and British regulator Ofgem. 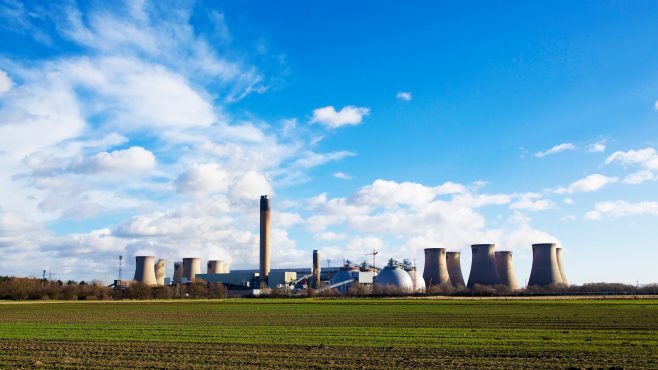 We look to use only woody biomass that is a by-product of heavy industry, such as from sawmills, and for which there is no other use. This is why we source most of our pellets from North America (63.5% from the US and 16.7% from Canada). UK forest production is very small and very difficult to source.

We also want to use residues from food processing, such as pellets from sunflower husks, and to look at using nutshells. Not much of this comes out of the UK, but lots could come from Europe and this would reduce our transport costs and emissions.

NGOs have criticised your decision to purchase the Canadian company Pinnacle Renewable Energy, claiming it will mean increased emissions and biodiversity loss, and has land use implications for indigenous people.

I am excited about this deal, which positions Drax as the world’s leading sustainable biomass generation and supply business. It progresses our strategy to increase self-supply, reduce biomass production costs and create a long-term future for sustainable biomass.

It will pave the way for our plans to use BECCS to become a carbon-negative company. Negative emissions from BECCS are vital to address the global climate emergency. BECCS can provide renewable electricity and support jobs and growth in a green post-Covid recovery.

As with every geography we source from, forests in Canada are constantly evolving and we want to maintain the highest sustainability standards. Upon completion of the deal, we will consult with First Nations and local communities, and deploy forest sustainability specialists.

Land use is a complex issue as it is important to balance the competing needs for land to be used for food growth, as well as for forestry or energy crops. We are exploring opportunities to use more energy crops, but quite carefully, given those issues.

There has also been criticism from Ember regarding subsidies Drax received to the tune of £832m in 2020, plus carbon tax breaks, which the think tank calculates amounted to £258m last year.

The fact we receive subsidies is a bit misleading as it suggests wind and solar do not. Shareholders have invested capital in Drax on the back of what the government has invested.

The UK’s electricity grid has decarbonised faster than any other country in the world as a result of the incentives to invest in renewables, and effective carbon pricing.

Drax only qualifies for support when it produces renewable energy, and this support is time limited and designed to incentivise companies to build renewable generation that would otherwise be uneconomic to meet the country’s decarbonisation targets.

There has been lots of talk about BECCS. What needs to happen to make it a viable climate solution?

The UK’s Climate Change Committee highlighted in December 2020 that 53 million tonnes of CO2 would need to be removed a year via BECCS by 2050 for the country to meet net zero. 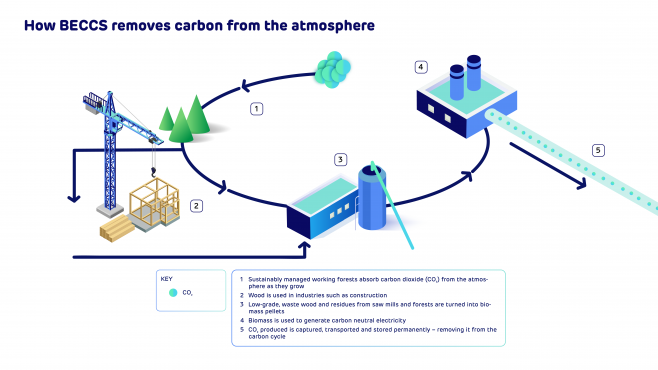 How BECCS could remove CO2 from the atmosphere. (Photo courtesy of Drax)

The technology to deliver post-combustion BECCS exists and is proven at scale. In September 2020, we began a trial of the technology with Mitsubishi Heavy Industries. We are working with other partners to develop carbon capture solutions.

Drax Power Station is in the Humber region, which has the highest absolute level of carbon emissions in the UK because of its industry and manufacturing. The region is a natural site for large-scale carbon capture and storage (CCS). We are working with Equinor, National Grid and others to turn Humber into a net-zero region. 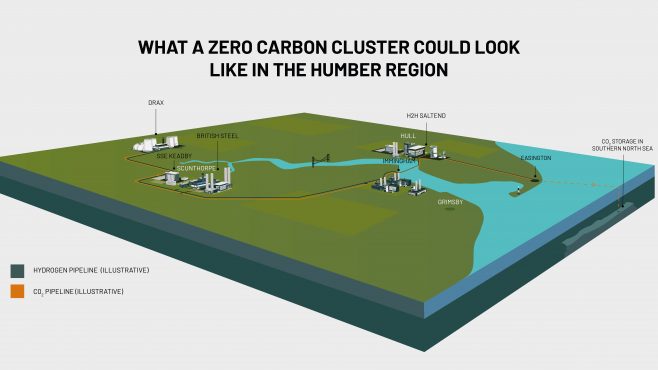 How the Zero Carbon Humber cluster could work in terms of CCS. (Photo courtesy of Drax)

It would be good if the government gave its full support to this initiative and other industrial clusters to make the UK a world leader in BECCS.

We need clarity from government showing what is possible and how it plans to make CCS and BECCS happen at scale. Ultimately, government needs to decide where it will spend money to get to net zero, this is not our decision.

Topics in this article: CCUS

@Jones_Pippa
Philippa Nuttall Jones, based in Brussels, has over 20 years’ experience as a journalist and communications expert covering environmental issues, energy and climate change from the UK, France and Belgium.
SUBSCRIBED