For many years, aviation has been the ultimate climate challenge – a sector difficult to decarbonise but with outsize impact because the emissions occur so high up in the atmosphere. Global aviation has so far been spared from paying for its carbon emissions, and almost all aircraft are still fully powered by fossil fuels.

The market for battery energy storage is estimated to grow to $10.84bn in 2026. The fall in battery technology prices and the increasing need for grid stability are just two reasons GlobalData have predicted for this growth, with the integration of renewable power holding significant sway over the power market. Over the last decade, various new digital and smart technologies have been integrated, with countries aggressively promoting the modernization of grids, enhancing the grids’ capability to meet present and future requirements. As part of the effort, batteries are being deployed for a wide range of uses. A few such uses include aiding smart grids, integrating renewables, and creating responsive electricity markets. Read this report for expert insights into: Get ahead of this growing market and win big by utilizing our report.
By GlobalData

Thank you. Please check your email to download the Report. 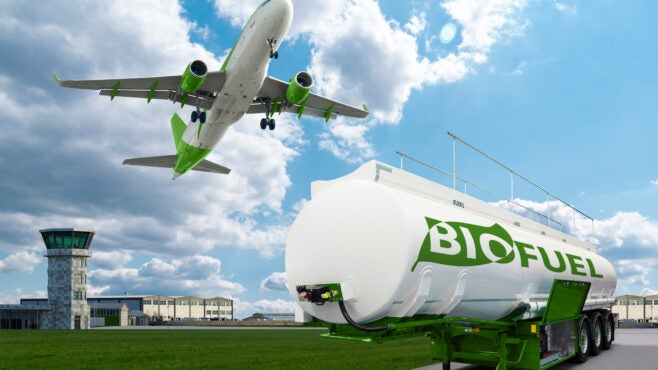 Many in the aviation sector say the short-term decarbonisation focus should be on increasing the use of liquid sustainable aviation fuel. (Photo by Scharfsinn86 via Getty Images)

In July 2021, the European Commission put forward a proposal to phase out fossil fuel subsidies for jet fuel and end free EU Emission Trading System allowances for airlines. “The times when we thought we could just pay for [offset] our carbon emissions and wait to decarbonise because it is more complicated for aviation than for other sectors, those times are really long gone,” said Flor Diaz Pulido, the Commission official in charge of aviation policy, at a recent event organised by European air traffic management organisation Eurocontrol.

“Now airlines really need to commit to decarbonise, and from the Commission’s perspective the best way to do that is through aviation liquid fuels.”

Much of the focus for decarbonising aviation so far has been on electrification and swapping fossil fuels for hydrogen, but although some pilot electric flights have gotten a great deal of media attention, little progress has been made in developing a viable electric aircraft, particularly not for long-haul flights. The development of planes powered by hydrogen fuel cells or hydrogen-based liquid fuels has also been slow going. This is prompting many in the sector to say the short-term focus should be on increasing the use of what is already technologically available today – liquid sustainable aviation fuel (Saf). SAF is made from renewable feedstocks such as municipal waste, agricultural residues and waste oils, or developed through a power-to-liquid route. It can be blended in with fossil fuels.

“We need to start decarbonising now, we cannot wait until hydrogen and electricity are available,” said Diaz Pulido. “These sustainable liquid fuels are really key. The technology has been there for ten years now, so the question is why have we not been able to break this chicken and egg situation?” Airlines are not using SAF because it is not available, and fuel providers are not making it because airlines are not using it.

Many in the industry agree. “SAF is well-proven, and it is compatible with existing aircraft and refuelling infrastructure so there would be no major changes to aircraft and airports that could delay broad use,” said Jonas Abrahamsson, CEO of Swedish airport operator Swedavia, at the Eurocontrol event. “At the same time we realise there are some huge commercial challenges. Today, SAF is too expensive, frankly; it is not competitive with traditional jet fuel, costing up to four times as much.”

In 2011, Dutch airline KLM operated the first commercial flight using a SAF blend. Since then 250,000 flights have had some element of SAF in their tanks, but the amount being used is still miniscule. Today these drop-in fuels account for just 0.05% of total jet fuel consumption, according to Eurocontrol. Moreover, in 2019, just 39 of the 1,657 airports in the EU accounted for 80% of SAF volumes in conventional aircraft – and only seven of these airports actually supply SAF. For the rest, the fuel was supplied elsewhere.

The problem is the big price gap between SAF and fossil-based jet fuel, which means airlines do not use it, so fuel suppliers do not make it. If production could be scaled up, costs would fall. However, fuel providers say that in a situation with high price pressure, low SAF demand and policy uncertainty, there are just too many headwinds.  The enormous crisis the aviation industry finds itself in due to the Covid-19 pandemic is not providing much motivation to make investments in new, more expensive types of fuel.

Abrahamsson said key to changing that dynamic is demonstrating that SAF works. “Blending schemes are a great tool to demonstrate there will be a market,” he says. “If they know that, investors will be more eager to put money in than before. If you combine that with incentives for pilot [production] facilities, I think we have come a long way.” California has such a blending obligation.

In February 2021, Europe’s airline and airport associations adopted a strategy called Destination 2050, which calls for 83% SAF in jet fuel by 2050. However, it will be a big challenge to get from 0.05% to 10% in just eight years, and raise it by an additional 73 percentage points in the following 20 years. It is unlikely voluntary industry goals will be enough. Some warn that setting unrealistic expectations is not helpful for getting specific bottlenecks solved now. For its part, the Commission decided to set a binding target for SAF of 63% by 2050, in its 'Fit for 55' package.

“In our proposal we are coming up with obligatory targets – in other proposals we are talking about aspirational targets,” emphasised Diaz Pulido. The Commission wanted to start with targets that do not “rock" the market too much, nor jeopardise the sustainability criteria, she added.

Fuel sustainability remains a big concern. The EU has already been burned once by setting targets for biofuel use in road transport that later had to be revised down to exclude biofuels from food crops causing indirect land use change and food supply issues. Diaz Pulido said that when it comes to SAF in aviation, careful safeguards are being put in place that are consistent with biofuel policies for other sectors. That horizontal framework will help drive the market, she says, and that is also the driver behind the Commission’s ReFuelEU initiative, which aims to boost supply and demand for sustainable aviation fuels by stimulating research and investment.

“We know that the business case for producing SAF for aviation will never be as strong as the business case for producing SAF for road transport,” the Commission official added. "Aviation is a niche market.” Clean liquid fuel advocates often stress that the road transport market is needed to provide the economies of scale to make clean fuels competitive. However, the Commission has decided not to recognise these fuels in its new car CO2 standards.

EU policy is not going to decarbonise the aviation sector globally, Diaz Pulido warned. “We are strongly committed to support all efforts going on at ICAO [International Civil Aviation Organization], like CORSIA. We really believe ICAO is the place where our European ambition will materialise in the future.”

However, the question of just how far in the future that is continues to cause European airlines and airports anxiety. So far, efforts at the ICAO have floundered. The EU is the only major economy seriously tackling aviation emissions, although the state of California in the US may show the way for federal legislation in the future.

Brian Moran, vice-president for global sustainability at Boeing, said at the Eurocontrol event that he sees common elements in the various regulatory regimes that are emerging worldwide. “What we see is a range of mechanisms that stimulates uptake, both on the demand side and the supply side,” he commented. Regulatory regimes that reward fuel producers with credits for sustainable fuels based on their carbon intensity seem to work well, he said.

California is a case in point, and Moran noted that 80% of global SAF supply currently comes from that state. “There has to be a reason for that,” he says, positing that California’s blending tax credit has started lowering the price differential between normal jet fuel and SAF.

One US state’s success does not mean there will be soon be national-level action in the US, China, India or any other major economy. But, Diaz Pulido said, “we are more and more positive that there is a trend worldwide to put in place SAF policies”.

Abrahamsson said even if action by other major economies or at the ICAO is not forthcoming, the EU should still be a first mover. “Can we afford to wait until we have the perfect global solution?” he asks. “I prefer that somebody is doing something than nobody is doing anything.”

The market for battery energy storage is estimated to grow to $10.84bn in 2026. The fall in battery technology prices and the increasing need for grid stability are just two reasons GlobalData have predicted for this growth, with the integration of renewable power holding significant sway over the power market. Over the last decade, various new digital and smart technologies have been integrated, with countries aggressively promoting the modernization of grids, enhancing the grids’ capability to meet present and future requirements. As part of the effort, batteries are being deployed for a wide range of uses. A few such uses include aiding smart grids, integrating renewables, and creating responsive electricity markets. Read this report for expert insights into: Get ahead of this growing market and win big by utilizing our report.
By GlobalData