People tend to be most aware of their personal contribution to climate change when they are on the move – driving a car or flying in an airplane. But in fact, one of the most impactful contributions to global emissions happens when sitting on the couch at home. Buildings account for 40% of the EU’s energy consumption and a third of its CO2 emissions with large amounts used to heat or cool us as we flop in front of the TV or read a book.

In October, the European Commission adopted a Renovation Wave strategy setting the goal of at least doubling EU renovation rates in the next ten years, meaning 35 million buildings would be renovated in that time. It is an ambitious vision that would involve decreasing the energy consumption of buildings by 14%, and result in a 60% decrease in greenhouse gas emissions from the sector as well as 160,000 new green construction jobs.

These are lofty goals, but there is scepticism that the strategy contains the tools necessary to achieve them.

Stefan Moser, who is in charge of energy efficiency of buildings and products at the European Commission, says regulatory changes with teeth will come soon.

“This is an action plan, it is not solving anything by itself,” he said at a recent European Policy Centre event. “These targets will have to be qualified and made more operational in the upcoming revision of the Energy Performance of Buildings Directive.”

There are a lot of elements to this strategy. First, it proposes improving the collection of data on the energy performance of buildings to improve labelling and assessment, which is currently a very inexact science. Right now buildings do have an energy efficiency rating, but it is little better than an educated guess.

Secondly, the strategy will make “well-targeted funding” available for renovation, including from the recently adopted €750m Covid recovery fund. Part of this funding will go to training programmes for workers in new green jobs in renovation.

The Commission will also revise several pieces of EU legislation over the coming year to expand the market for sustainable construction products and services. These include revisions of the Renewable Energy Directive, the Energy Efficiency Directive, and possibly changes to the EU emissions trading system legislation to include buildings.

This time with standards

Construction businesses are excited about the strategy because it means more renovation opportunities for them. However, they have been promised change before and the EU hasn’t delivered. The existing Energy Efficiency Directive requires national governments to renovate at least 3% of public buildings, but this hasn’t happened. Nor has the EU met its headline goal of increasing energy efficiency by 20% by 2020.

Adrian Joyce, secretary general of Euroace, an alliance of companies making products and equipment to improve the energy efficiency of buildings, says this time it is different.

“We are aware the teeth aren’t there yet in this strategy, but we are encouraged overall,” he says. “The Commission has shown great courage in proposing minimum energy performance standards to be included in the review next year. Five years ago that also came up, but it was immediately knocked down by national governments.”

The standards issue is enormously sensitive because EU member states say building regulations are their responsibility, not that of Brussels. However, the lack of an EU standard has meant some governments haven’t acted at all, and those that have are putting in disjointed policies.

“I really believe this is what we have been struggling with and missing,” says senior advisor with the Regulatory Assistance Project Louise Sunderland. “We have been relying on information, communication tools and incentives, but those can only get us so far.”

However, she cautions that developing these minimum performance standards will be a big challenge over the coming year.

“We have already seen that different member states are doing minimum performance standards differently, they are taking different approaches,” she says. “So we need to think about how to maintain that flexibility while driving ambition.”

Moser says the Commission is aware of the challenge.

“We cannot micromanage this with such different circumstances as we find them across the EU,” he says. “It will require a political decision by national politicians about how to do that precisely. Good practices and the direction can, of course, be indicated from the European level, but we should not put out a rulebook for the same minimum energy performance standards for everyone.”

Pascal Eveillard, Chairman of European insulation manufacturers association Eurima, says these performance standards are going to be one of most important factors in determining whether the renovation wave is a success.

“This should become our compass for renovation,” he says. “We have been advocating for them for a long time; we think it will stimulate investment and push the worst-performing buildings out of the market.” 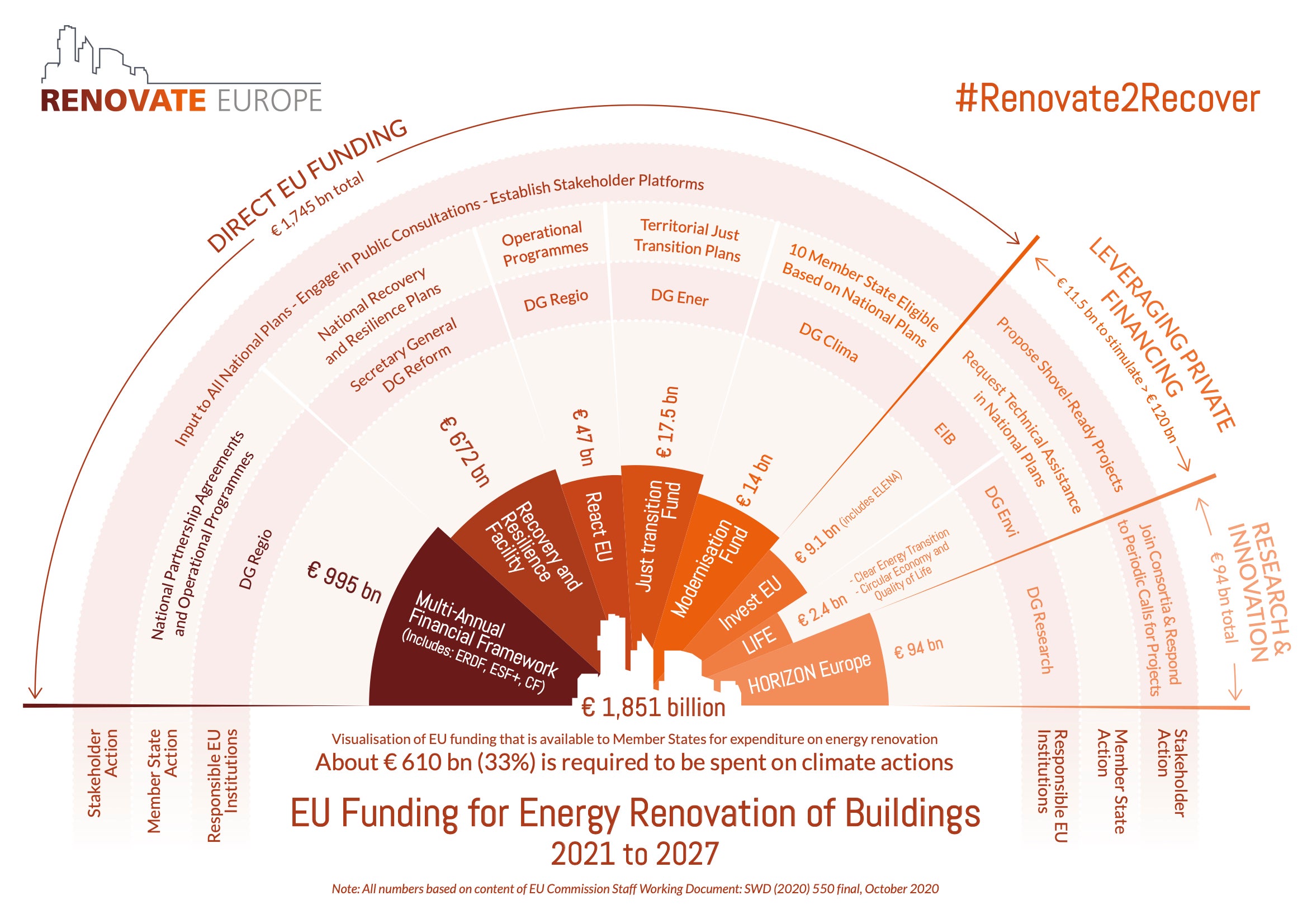 Show me the money

Of course the businesses that stand to make a profit are excited about the strategy, but what about the governments that would be forced to meet targets and who have blocked progress in the past?

Much of the burden for these new targets will fall on local governments, which have already been subject to the 3% renovation requirement for public buildings. Adrian Hiel from Energy Cities, a network of local governments, says municipal governments are ready to embrace the renovation wave – but only if they are given the tools to do it.

“When the Commission came out with the obligation to renovate municipal buildings, we were sceptical about how our members would react,” he says. “But we did a quick impromptu survey and 90% of our cities were in favour. They want to do it, but they want a supporting framework to get there. It is the same as for individuals – most people would love to renovate their homes, but if it only pays back in 20 years, they need some additional incentive.”

Hiel adds: “So it all depends on the money, and we don’t know how much money is going to the renovation wave. The EU could have set aside a specific renovation fund. Instead they have opted to make it easier to combine all the other money that is out there. Is that a good approach? It all depends on how easy it is to access that funding.”

There is a big difference between “well-targeted” funding and “dedicated” funding. There is a lot of money within the EU budget to be had, and not just from the Covid recovery fund, says Hiel. Cohesion funding, which is intended for less-developed regions in the EU, was majorly underspent in the last budgetary cycle, for instance. Under this strategy, leftover money can go to renovation projects. The other key question, says Hiel, is whether the money will be given out as grants, or loans. Grants are needed, he says, because the long return time of 30 or even 50 years means a loan might come due before the improvements have paid off.

“You can have an infinite amount of loans in this market but that is not going to be enough,” he says.

Eurima’s Eveillard says construction businesses are also worried that the money won’t be there.

“It is good to have money, but it is better if the money is clearly identified, earmarked and easily accessed,” he says.

Moser says the Commission isn’t going to “ring-fence what member states have to do with funds” in terms of renovation. However, 37% of EU budget spending has been set aside for climate, and this could be spent on deep renovation. “Of course, this isn’t specific to renovation,” he concedes.

“But some additional European funding could be provided to help lower-income households,” adds Moser. “There could possibly even be funding from the ETS [Emissions Trading System] if the review leads to the inclusion of heating and cooling.”

Making buildings subject to emissions trading requirements is a contentious debate in the EU, but some believe it could provide both incentive and funding for renovations.

The Commission will also have to make sure climate money isn’t given to renovations that aren’t actually improving energy efficiency. Moser says it needs to define what a “deep” renovation is that can be eligible for funds.

Around the world, governments are closely watching what the EU will do with its buildings strategy and may seek to emulate it. The incoming administration of Joe Biden in the US is said to be keenly interested in looking at buildings as part of its $2bn programme for the energy transition.

“Cities in the US are introducing energy performance standards for buildings,” says Sunderland. “The UK has proposed to increase its standard for privately rented homes.”

The Australian government is also interested in what is happening in Europe and the US, and looking at what it can learn from housing performance standards, she adds. “There is huge faith and confidence in this policy family.”

As governments around the world implement stimulus programmes to fight the Covid recession, these renovation waves offer an attractive win-win solution for the economy and the climate. The Commission estimates its strategy would create 160,000 new green construction jobs; 12–18 local jobs per million euros invested. On the flip side, it estimates the cost of inaction on building emissions would be €175bn a year, 1.4% of EU GDP.

No matter the climate and economic benefit, however, the key question is whether the EU will give teeth to this strategy in the form of standards and money. Establishing a dedicated fund would have been one way for the Commission to show it was willing to put its money where its mouth is. Citizens and cities will be unsure whether they are getting the help they need to renovate until they actually see the money being doled out from the 2021–27 EU budget.