Climate sceptics often argue the transition to green electricity will be expensive for consumers, with costs for installing new technologies being added to household electricity bills.

However, analysis of electricity pricing and renewables generation data for 29 European countries shows that over the past decade there has been no clear trend of countries with greater growth in renewables seeing higher bills. While most countries have seen an increase in renewables and consumer electricity prices, the rate of each relative to the other varies across the continent. 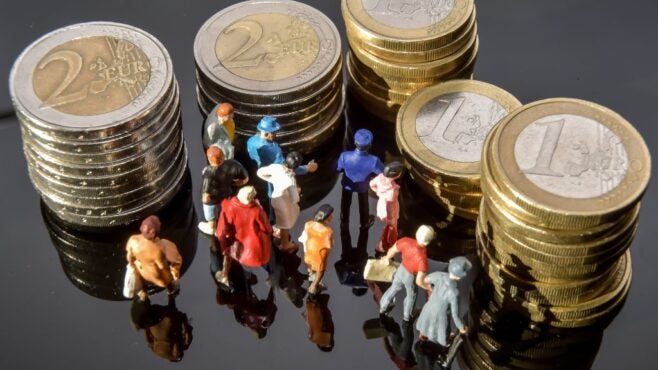 The impact of renewables on consumer electricity prices is complicated to trace in most countries. (Photo by Philippe Huguen/AFP via Getty Images)

Few countries fit any kind of pattern. Turkey and Hungary saw significant falls in their electricity prices of around 35% each over the last decade, despite large increases – 65.3% and 65.5% respectively – in the proportion of electricity generated by renewables.

More renewables does not have to mean higher electricity bills

“Bills are made up of many different components,” says Bram Claeys, a senior adviser at the Regulatory Assistance Project (RAP), an energy-focused non-governmental organisation. “While variable renewables like solar and wind have increased their share [in the electricity mix] and reduced considerably in price, any effect of renewables on the electricity bill is complex.”

Renewables are still not at a high enough level to have a significant impact on electricity bills “compared to other dynamics at play in price formation”, says Claeys. “I don’t think most people expect a long-term increase in electricity transmission costs because of the transition.”

Another 22% covers the cost of running the network, 17% goes to retail electricity suppliers, and 23% covers social and environmental obligations required by the government. These obligations include programmes to deliver low-carbon electricity, build energy-efficient homes and provide support for the fuel poor. VAT accounts for a further 4.8% of the bill, while 1.5% of it pays for minor system operation costs.

Green tariffs and other government levies intended to pay for renewables can lead to a price hike for consumers. “There is a very strong correlation between the level of taxes and VAT, and electricity bills,” says Claeys. “That is a much clearer pattern than just looking at renewables [versus price].”

The reason Hungary’s electricity bills are so low, for example, is because the government subsidises costs for consumers and does not add any taxes – green or otherwise – to consumer bills. In other European countries, the call is increasing for governments to introduce taxes on heavy polluters to fund the transition to clean energy, rather than charge consumers.

Renewables getting cheaper and cheaper

A large share of modern renewables should lower consumer costs, if taxes and levies are removed from the equation and only the wholesale cost of electricity is analysed in relation to bills.

Most studies show solar and wind power offering the cheapest wholesale electricity prices compared with conventional power plants. Poland, which generates three-quarters of its electricity from coal, had the highest wholesale cost of electricity in the EU in 2020.

“Electricity in countries with high levels of renewable energy should be cheap because production costs are cheap,” says Malte Jansen, a climate policy expert at Imperial College London. “There are studies suggesting that when countries go beyond 60% renewables in power generation it gets more expensive to integrate them into the energy system. But for now, renewables keep getting cheaper and cheaper.”

Simon Skillings from climate think tank E3G acknowledges that some experts believe energy systems will always need baseload power from nuclear or fossil fuels, for when there is no sun or wind. “But others believe we can go to 100% renewables because the knowledge of how to integrate renewables will improve and the costs of balancing technologies like storage will reduce,” he adds.

Renewables costs for the consumer can also increase when authorities fail to pursue the most efficient energy strategy. Capacity mechanisms are often used as a means to support a consistent state of over-supply as we move towards a grid based on renewables and fossil fuel peaker plants, comments Mike Hogan, senior adviser at RAP.

“We don’t really need capacity mechanisms – flexible demand is a much more useful and consumer-driven solution to balancing demand and supply,” says Hogan. “Capacity mechanisms are a perpetuation of the myth that reliability is having lots of capacity, which is not true. It is about having energy when you need it, which has more to do with what kind of capacity you have than with how much.

“It is very expensive to maintain generating capacity that is always considerably larger and far less flexible than what is needed. It might be convenient for power companies to maintain so much capacity that they never have to worry about supply – but it is not good for consumers.”

The impact of renewables on electricity prices may be complicated to trace in most countries, but the red line is easier to follow in Germany, which has a renewables surcharge tagged onto every household’s electricity bill.

The surcharge was devised to ensure electricity companies are adequately compensated for providing cleaner electricity. However, it has left consumers paying inflated electricity prices to cover the costs of renewable technologies that were expensive when installed many years ago.

The charge now accounts for around one fifth of household electricity bills, having risen from €0.08/kWh in 1998 to €6.76/kWh in 2020. The German government plans to decrease the surcharge over the next few years, with a new carbon pricing system on CO2 from vehicles and buildings helping to cover the costs of older renewables installations.

“When you generate electricity from fossil fuels, you need to buy the coal and gas you will burn,” says Christina Hess of Octopus Energy, a UK energy company. “But with wind and sun, the inputs are basically free. And solar and wind farms are cheap to build. This should lead to lower electricity bills for customers. But that is still not really happening and one of the main reasons for it is that electrons – whether green or brown – often carry sin and poll taxes as part of their fixed charges.”

Octopus would like to see a more flexible electricity system, where bills are more closely tied to what kind of power is being generated at a given time.

“Customers don’t see any benefit when wholesale electricity prices drop or when the grid is at its greenest,” Hess explains. “We envision an energy system in which the greenest electrons are also the cheapest electrons.”

Claeys predicts that German energy bills will soon begin to be more representative of the actual costs of electricity today.

“Expensive legacy solar and wind contracts from ten years ago are the rucksack that Germans are carrying,” he says. “But at a certain point those contracts will end. So as we go forwards, you are going to get a purer picture of the actual costs of renewables and system costs in bills.”