Can the US reverse a decades-long decline in union membership and transition to clean energy without leaving workers behind? The White House certainly thinks so and has moved aggressively on both fronts during Joe Biden’s first 100 days in office.

“Clean energy jobs will not automatically provide high salaries or sufficient protections,” warns a report published last month by the White House Council of Economic Advisers (CEA). “Without a federal strategy for the transition, well-paying jobs could be lost, and new, well-paying jobs may not be created.” 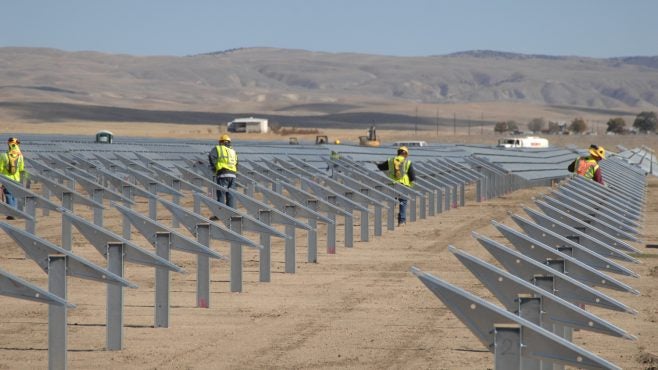 The Biden administration’s early moves to strengthen unions while investing $1trn (€830bn) in clean energy as part of a $2.25trn infrastructure and jobs proposal are attempts to develop that federal strategy. The White House wants to ensure jobs in the new clean energy economy pay well and workers in legacy energy sectors will not lose out if they take jobs in solar, energy storage or other clean energy sectors.

Diversifying the next generation of US clean energy workers

Direct comparisons are difficult, and it will take time to reach parity, but recent trends indicate clean energy technologies are making headway against the incumbents. The annual mean wage in solar power electric generation ($98,230) recently surpassed the annual mean wage in oil and gas extraction ($97,660), says the US Bureau of Labor Statistics.

New research also supports the argument that the US can pay living wages to clean energy workers without hindering decarbonisation.

There does not have to be a trade-off between using union labour and paying workers a prevailing wage, and getting solar power projects built, finds a UC Berkeley Labor Center paper published in November 2020 by Betony Jones, founder of Inclusive Economics. “Prevailing wage” generally refers to the hourly rate paid to skilled workers from a building trade in a local market for public works projects.

California, where prevailing wage requirements are commonplace, is the largest US solar market by far.

“Evidence from over 15 years of union-built solar projects in California shows no trade-off between higher wages and the pace or scale of solar development,” writes Jones. “Nearly all of California’s utility-scale solar projects, and many commercial arrays, have been built with union labour.”

Jones’s findings are supported by a working paper published in April 2021 by Princeton University researchers Erin Mayfield and Jesse Jenkins on the interplay between so-called “high road” labour practices and policies, and the clean energy transition. The research was funded by a grant from the BlueGreen Alliance, a non-profit organisation that unites labour unions and environmental organisations.

Mayfield and Jenkins asked what impact higher pay for solar and wind power sector workers, as well as increasing the amount of wind and solar hardware manufactured domestically, would have on clean energy costs and deployment.

Boosting labour costs by 20% increases installed capital costs for wind and solar power projects by 2–4% and operations and maintenance costs by 3–6%. However, higher productivity from skilled labour “can offset some or all of this increase in cost”, they found.

Raising the share of solar and wind components manufactured in the US by 10% could create an additional 45,000 jobs annually this decade while increasing installation costs for solar PV projects by just 1% on average. Boost the domestic manufacturing share to 20%, and it would lift wind and solar workers’ wages by an additional $5bn this decade, roughly equivalent to raising each worker’s annual wages by $13,000.

“High-road labour practices and policies have a small influence on wind and solar PV costs as well as the cost and pace of net-zero transitions,” conclude Mayfield and Jenkins. “These practices are unlikely to impede the pursuit of least-cost decarbonisation strategies, while generating substantial benefits for US workers and communities.”

Investing in workers is definitely worth the cost, insists BlueGreen Alliance’s Sam Appel.

“Are we really willing to throw our working class, our low-income folks and society under the bus, simply because it costs 2% or 3% more to build a project with good jobs for people who don’t have them?” he asks.

“We can’t afford to not do this,” he adds. “What sort of society would we be if we didn’t make sure that as we make a massive transition between industries, between ways of powering our society, we didn’t make sure we were lifting up our workers and the people who actually are going to be impacted by the changes?”

Outside California, agreements to use union labour are becoming standard operating procedure for the US’s emerging offshore wind industry.

In November 2020, Danish clean energy giant Ørsted announced a deal with the national leadership of more than a dozen North American building trades unions (NABTU) and the AFL-CIO to transition construction workers to offshore wind projects. The deal is based on the model developed by local building trades for the construction of the US’s first commercial offshore wind project, Ørsted’s Block Island wind farm in Rhode Island, says NABTU president Sean McGarvey.

Ørsted, the world’s largest and most experienced offshore wind developer, has been awarded rights to build nearly 3,000MW of offshore wind capacity in five projects on the US east coast. The company’s early commitment to union labour could establish a baseline for the US’s nascent industry.

Maine Aqua Ventus, the developer of a floating offshore wind demonstration project off the Maine coast, reached an agreement with the state’s building trades in April 2021 to hire union labour for the project. In Rhode Island, Ørsted with its partner, the utility Eversource, recently announced a deal with the local building trades to use union labour in the buildout of an offshore wind farm component manufacturing facility at the Port of Providence.

“There are a lot of people out there who say ‘no’ to everything,” Robbie Hunter, president of the State Building & Construction Trades Council of California, said at the press launch of Chiu’s bill. “We have got to say ‘yes’ to things that work – and this is absolutely a technology that will work.”

“It also helps our workers who have been rocked by instability,” added Tim Cremins, political director at the International Union of Operating Engineers. “It gives them some continuity in their careers.”

In a sharp break with the previous four years, the push by clean energy companies to hire union labour now has full-throated support from the White House.

“When I think of climate change, I think about jobs,” President Biden tweeted in December 2020. “Good-paying, union jobs that put Americans to work, make our air cleaner, and rebuild America’s crumbling infrastructure.”

When I think of climate change, I think about jobs. Good-paying, union jobs that put Americans to work, make our air cleaner, and rebuild America’s crumbling infrastructure.

So far, the rhetoric is backed by action across the board.

Biden has signed an executive order restoring federal workers’ civil service protections and right to collectively bargain. He has also endorsed the Protecting the Right to Organize (PRO) Act of 2021, legislation that would make it easier for workers to organise and collectively bargain for better wages and benefits. Thirdly, the president has established a task force chaired by vice-president Kamala Harris and Labor Secretary Marty Walsh charged with identifying existing and new policies that help workers organise and bargain with their employers.

Democratic control of both houses of Congress means the White House’s vision for a renewal of organised labour has a path to becoming law. The PRO Act passed out of the US House on 9 March and awaits action in the Senate. That chamber’s most important swing vote, Joe Manchin, came out in support of the PRO Act last month. However, the bill’s fate likely rests on Senate Democrats’ willingness to abolish the filibuster to enable the bill to pass with a simple majority vote.

Another good omen for the White House is the recent pivot by one of the US’s legacy fossil fuel trade unions, the United Mine Workers of America (UMWA), to embrace the energy transition. Last month, UMWA released a plan, “Preserving Coal Country,” outlining the union’s vision for “keeping America’s coal miners, families and communities whole in an era of global energy transition”.

UMWA notes the precipitous decline in US coal industry workers – from 92,000 at the end of 2011 to 44,100 by December 2020. The proposal recommends passage of the PRO Act as well as a host of tax incentives and policies to support coal workers and dependent communities.

The mine workers urge policymakers to boost funding for carbon capture and storage (CCS) technology and infrastructure, to expand tax incentives for renewable energy components manufacturing in coal country, and to replace or maintain wages, healthcare benefits and pensions for coal workers and their families.

“Change is coming, whether we seek it or not,” the plan concludes. “Too many inside and outside the coalfields have looked the other way when it comes to recognising and addressing specifically what that change must be, but we can look away no longer. We must act, while acting in a way that has real, positive impact on the people who are most affected by this change.”

“Unlike most of its major trading partners, the US government has not adopted a robust strategy to encourage the innovation and deployment of clean energy or to support US workers and communities through the energy transition,” says the White House CEA report.

“Absent such a strategy, workers could be hit by the dual negative of declining jobs in high-carbon industries alongside too few new domestic jobs in the emerging carbon-free industries of the future.”

Joe Biden’s jobs plan is a $2.25trn bet that the clean energy future is the winning one – for workers and the planet.

This is the third article in a special series on green jobs Energy Monitor is running around Labour Day on 1 May. The other articles in the series are:

Topics in this article: California, Jobs, Offshore Wind, Solar, US