Launched in 2015 by Andrzej Duda, President of Poland, and Kolinda Grabar-Kitarović, then President of Croatia, the Three Seas Initiative (3SI) brings together 12 countries from the EU’s eastern flank to push “economic growth, security and a stronger and more cohesive Europe”. Since then, it has gained support from the US. It is also attracting some business interest with a 3SI investment fund run by London-based investment manager Amber.

It is no surprise, given the initiative’s unofficial role as a block to Russian influence in the region, that most documents and discussions related to it have a distinct smell of natural gas. Focusing instead on clean energy and digital infrastructure would be better for security, business and the climate. 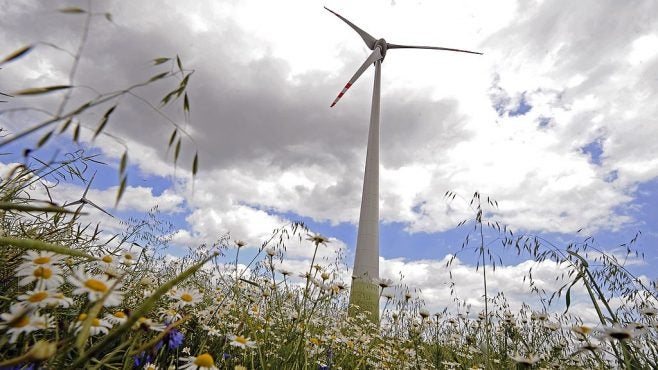 View of a wind turbine near Kisielice in northern Poland. (Photo by Janek Skarzynski/AFP via Getty Images)

The logic behind 3SI’s current focus is that building gas infrastructure not supported by Russia offers an alternative to supplies from Moscow and a potential way of weakening Russia’s foothold in the region. However, the reality is different.

More infrastructure is likely to allow Russia to export greater amounts of gas at more competitive prices. Furthermore, Europe already has a significant gas import overcapacity and projections show gas consumption in the EU will fall from annual demand of approximately 450 billion cubic meters (bcm) today to around 300bcm by 2030.

Investors are increasingly cautious about gas projects in Europe, with commentators in the region starting to talk about “peak LNG”. A carbon price that recently crossed €50 a tonne is making the case for gas even shakier.

US policymakers, however, are still pushing gas diversification, mostly in the form of LNG exports, as key to EU energy security, but further expansion of LNG and other natural gas import capacity will most likely end up as stranded assets and public financial support for it will be wasted money.

All this does not mean the 3SI is not an attractive investment proposition. Exactly the opposite, but the direction should be different.

The 3SI region is lagging in many areas of critical infrastructure essential for strengthening its energy, and overall, security. Transport infrastructure, especially railways, is in a dire state. Electricity grids are underdeveloped, deployment of renewable energy is limited, energy efficiency is low and cyber vulnerability is high. These areas need addressing and they have much clearer commercial logic if the region is serious about energy security, and climate and energy targets.

The first area to explore is how to better integrate the various electricity markets. This is essential to develop the region’s energy sector, scale up the deployment of renewables and balance their variable generation.

The 3SI could bring together transmission system operators, regulators and electricity trading platforms, and support their closer cooperation. Integrating the markets of the western Balkans, Ukraine and Moldova should also be put on the table since their electricity systems are gradually on their way to full integration with the EU.

The region has the cost-competitive potential to rapidly increase its share of renewables. Onshore wind and solar no longer need subsidies, but they do need enabling policies, regulatory frameworks and infrastructure upgrades. The region lags behind in the development of energy communities, smart grids and storage systems. These are all attractive for investors and will contribute to the region’s energy security.

Offshore wind is a natural direction for the 3SI.

Poland has introduced legislation facilitating the development of offshore wind and is moving ahead with projects of 11GW, with an option to double that capacity in the future. Estonia and Latvia are discussing infrastructure that would connect 1GW of offshore wind. Romania has passed a law supporting offshore wind and the country’s energy company Hidroelectrica has plans to develop capacity. Investors are also expressing interest in Bulgaria’s offshore wind potential, and Croatian and Italian companies see the Adriatic Sea as a promising offshore wind destination.

An offshore wind dimension of the 3SI would likewise be in line with the energy plans of President Biden who recently announced an ambitious offshore programme. It would help the US gain knowledge and open opportunities for its engagement in Europe, while strengthening the energy security position of eastern Europe by reducing its reliance on Russian gas.

The jury is still out on the exact role hydrogen will play in the transition. However, there is certainly potential for central and eastern Europe to play an important role in driving down the cost of green hydrogen by transforming coal regions into solar, hydrogen and batteries hubs. This makes economic and environmental sense. Indeed, the region could, with the right investment, offer a model for transitioning US coal regions and even create a formula for the rest of the world.

The 3SI should also address the lack of research funding in central and eastern European countries, one of the reasons for the region’s technological vulnerability. Such investment would help Europe deliver its Green Deal and help keep the EU, and the US, ahead of the technological curve. If such opportunities are not grabbed by US and EU companies they will become attractive targets for Chinese, and to a smaller extent, Russian investments. This trend is already happening.

If the 3SI and the US administration really want to strengthen the resilience of eastern and central Europe – and reduce Russian influence – they must focus on the future, and that future is more about clean energy than natural gas.

Topics in this article: Gas, Poland, Russia, Stranded Assets, US