In 1933, as the world was reeling from the Great Depression, US President Franklin D Roosevelt put in place what would become one of the most legendary and consequential policies in US history – the New Deal. Implemented over six years, the unprecedentedly huge government programme is still viewed by Democrats today as one of the party’s greatest achievements, while it is reviled by some Republicans as a form of socialism.

Some 70 years later, the journalist Thomas Friedman, writing in the New York Times, suggested that this same concept should be applied to the climate crisis.

“If you have put a windmill in your yard or some solar panels on your roof, bless your heart,” he wrote. “But we will only green the world when we change the very nature of the electricity grid – moving it away from dirty coal or oil to clean coal and renewables. And that is a huge industrial project – much bigger than anyone has told you. Finally, like the New Deal, if we undertake the green version, it has the potential to create a whole new clean power industry to spur our economy into the 21st century.” 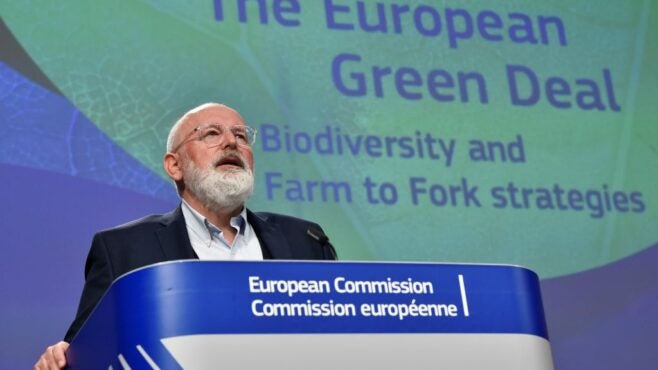 FDR’s New Deal involved big infrastructure projects that gave jobs to the unemployed, spurring economic recovery through massive public investment while at the same time achieving wider societal goals. The idea behind the Green New Deal is the same – to make massive investments that solve the climate crisis while also generating employment and helping the economy.

A year after Friedman floated the idea, a group of economists in the UK took up the call and formed the Green New Deal group. The work of that group was embraced by the UN Environment Programme, and before long it was adopted in political manifestos of Green parties around the world. Democrats began using the term during the presidency of Barack Obama, urging him to use the idea to sell his climate policy to the public as a stimulus package for Americans hit hard by the financial crisis. However, Obama did not take up the idea, choosing instead to expend his political capital on healthcare. He abandoned efforts to get a climate bill through the Republican-controlled US Congress.

The progressive wing of the Democratic Party hasn’t given up, and the Green New Deal became a major talking point in the Democratic primary during 2019. But then, before any Democratic president would have a chance to enact it, the new EU Commission president swooped in and enacted her own version shortly after taking office in December 2019.

In the EU’s version, the word ‘new’ has been stripped out – perhaps to avoid a reference to a 1930s US policy not all Europeans know about, but it may also have been done to avoid unflattering comparisons to the Democrats’ plans. Some climate campaigners say the green deal of Ursula Von der Leyen, a German conservative, is a pale comparison of what was being envisioned by the American left. Others have grumbled that it is greenwashing with little substance behind it.

“You just have to look beyond the top lines to see that the proposed measures are either too weak, half-baked or missing altogether,” said Greenpeace’s Franziska Achterberg when the Green Deal was unveiled. Greenpeace is no more impressed with the strategy now that Covid recovery funding has been dedicated toward meeting its goals. “European governments said they would deliver a green recovery plan from the Covid-19 pandemic, but they have…failed to guarantee that public money won’t go to polluting industries,” says Greenpeace’s Sebastian Mang. “This means any good investment could be cancelled out by support for outdated industries.”

However, there are real fundamental shifts envisioned by this strategy. At the heart of the deal is a commitment for the EU to completely decarbonise down to net-zero emissions by 2050. Along the way, EU countries have pledged to reduce emissions by 40% by 2030, a target Von der Leyen proposed to raise to 55% in her first State of the Union speech in September 2020. It is hard to imagine a Biden administration agreeing equally ambitious US targets next year were he to win the presidential elections this autumn.

“This is Europe’s man on the moon moment,” Von der Leyen said when she unveiled the policy. “The old growth model is out of date and out of touch with our planet.”

Von der Leyen’s lofty rhetoric failed initially to match the deal’s firepower. Rather than the giant infrastructure and spending bazooka that was FDR’s New Deal, the EU’s deal was a statement of intent.

However, that changed in 2020 with the onset of the coronavirus economic crisis. In July, EU national leaders agreed a €750bn Covid-19 recovery fund, one-third of which will be ring-fenced for climate spending. Suddenly, the prospect that Europe’s Green Deal could be a spending plan that matched the New Deal in ambition materialised.

Von der Leyen, backed by several national European leaders such as Germany’s Angela Merkel, has insisted the Covid recovery should be a “green recovery”. So far, the EU seems to be failing the hard test of making that a reality, with condition-free airline bailouts immediately following the lockdowns, for example.

But the real test of whether the EU can put its money where its mouth is will come in 2021 when the recovery fund starts to be dispersed.

In addition to the legally binding 2050 net-zero target, it envisions a (yet to be proposed) carbon border tax to prevent companies from relocating outside the EU to avoid climate legislation.

It also includes a €40bn just transition fund to help spread the burden and help coal-reliant regions, such as Poland, ditch fossil fuels in favour of cleaner alternatives. The fund was originally supposed to be €100bn, but was lowered by the so-called “frugal four” – namely Austria, Denmark, Sweden and the Netherlands – during EU budget negotiations.

Another key tenet of the strategy is the proviso not to conclude free trade agreements with countries that are not signatories to the Paris Agreement.

“The European Green Deal is an opportunity to improve the health and well-being of our people by transforming our economic model,” says Frans Timmermans, EU vice- president responsible for the green deal. “Our plan sets out how to cut emissions, restore the health of our natural environment, protect our wildlife, create new economic opportunities, and improve the quality of life of our citizens.”

The commission estimates that meeting the green deal objectives will require €260bn of additional investment each year until 2030, representing about 1.4% of 2018 EU GDP. It is a large but achievable amount, which the commission hopes to boost with its sustainable finance strategy being developed now.

With €260bn a year needed, even if the Covid recovery fund was spent entirely on this climate spending, it would run out of money in three years.  That is why the commission is hoping the public spending can be matched by private spending. The plan is to do this through matching funds from the European Investment Bank, among other vehicles, but this would make it very different from FDR’s New Deal, which was mostly accomplished with public money.

If a new Biden administration takes office in January 2021, people will be watching to see if he emulates the public-private approach of the EU or opts for more public spending. The key thing to watch will be whether, 70 years after FDR’s New Deal, the US is once again ready to take the lead.