For a long time, the US administration has been supporting alternatives to Russian gas routes into Europe. The joint objective of diversifying supply in Europe while boosting economic growth at home might be justified, but the outcome is counterproductive and works against the US’s own objectives and the EU’s bid to become net zero by 2050.

European gas infrastructure dominated by Russia, directly or behind the scenes, is growing. TurkStream is already delivering Russian gas across the Black Sea to Turkey. Its extension is being frantically built through Bulgaria and Serbia and should soon be completed. Nord Stream 2 is advancing towards Germany despite fierce opposition from the US and countries around the Baltic Sea. 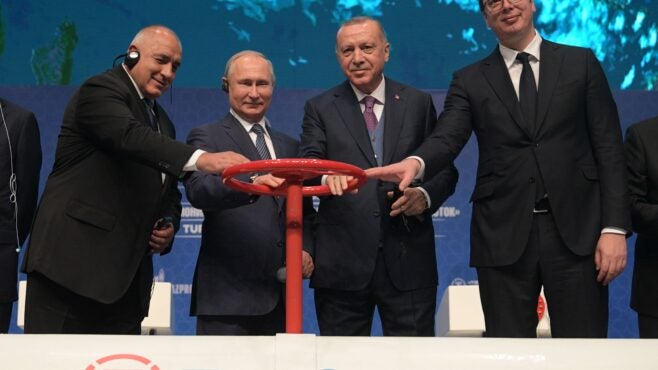 Leaders from Bulgaria, Russia, Turkey and Serbia at the inauguration ceremony of the TurkStream gas pipeline in January. (Photo by Alexey Druzhinin/Sputnik/AFP via Getty Images)

Alternatives to Russian pipelines are also popping up as Europe attempts to reduce Moscow’s dominance. The Trans Adriatic Pipeline, bringing gas from Azerbaijan into southern Europe via Greece, is now completed and several new European terminals are already receiving liquified natural gas (LNG) from the US and elsewhere, with more LNG terminals planned.

At the same time, Russia is rapidly increasing its LNG export capacity and in 2019 exported 40 billion cubic metres (bcm). European LNG terminals might provide alternatives to Russian pipeline gas, but Russia can also use the terminals for its own exports.

Meanwhile, despite questionable economics, the US is offering support for the EastMed gas pipeline that would bring gas from Israel to Cyprus and mainland Europe, while Russian energy company Rosneft has acquired a 30% stake in Zohr, believed to be the largest gas field in the eastern Mediterranean, which belongs to Egypt.

Half of Europe is surrounded with infrastructure projects that serve Russian gas export interests. The US is trying to break the Russian gas blockade by implementing sanctions against gas companies involved in Russian projects and offering strong political support for alternative pipelines and LNG terminals.

However, all this frenetic activity is simply creating gas import infrastructure that Europe doesn’t need.

In 2019, gas consumption in Europe was roughly the same as it was 20 years ago, despite significant economic growth. Since its low point in 2014, gas demand in Europe has been growing as it rapidly replaces coal, helped by low gas prices and higher CO2 prices. The trend is mostly a result of higher use of existing gas generation capacity; investment in new capacity is low. Assessments by the European Commission suggest that by 2030 gas consumption will fall by at least a quarter compared with 2015 levels.

Renewables and energy efficiency helped by integrated power markets and storage, not gas, are the main medium and long-term replacements for coal. With the EU target for carbon neutrality by 2050 and an interim target to reduce greenhouse gas emissions by 55% by 2030, natural gas will be under additional pressure and will inevitably return to its declining trend.

At the same time, Europe has excess gas import capacity of around 725bcm while demand remains under 500bcm. This capacity is connected to a sufficient variety of import destinations, but the race to build more gas infrastructure continues. Russia pushes unnecessary projects. Washington fights back with political statements, sanction threats and legislative acts supporting alternative infrastructure.

On 18 November, the US Congress declared unanimous support for the Three Seas Initiative – which includes the 12 EU member states located between the Adriatic, the Baltic and the Black Seas, and the US – in its “efforts to increase energy independence and infrastructure connectivity” and increase US and European national security. The declaration mentions renewables, but lists several European gas infrastructure projects and it is clear gas is at its heart.

The declaration comes after, and in support of, several US bills and high profile political missions promoting gas pipeline alternatives. The US Protecting Europe’s Energy Security Act opens the door for sanctions against companies involved in the Nord Stream 2 and TurkStream pipelines. The European Energy Security and Diversification Act offers technical and political support mainly for alternatives to Russian gas projects.

These initiatives, together with EU-US cooperation on gas alternatives, are apparently aimed at stopping Russia’s attempts to use energy as a political instrument, as Cold War logic would suggest, or, more prosaically, to maximise financial gains and secure long-term market positions. Whatever the truth, they don’t appear to have much impact.

The European Commission’s non-confrontational bureaucracy and competition rules have, until now, have been more successful. They helped a few rattled European countries stop the ridiculously overpriced South Stream project and then forced Gazprom to offer market prices to countries still too dependent on Russian gas.

These were welcome wins, but they are far from enough.

The natural gas landscape is changing as the fundamentals of energy security policy and the energy economy transform. The low prices of renewables have blurred the  division between energy exporters and energy importers that gave birth to Opec and the International Energy Agency (IEA). Fifteen years ago, the IEA was predicting the EU would today be consuming around 600bcm of natural gas. Last year the EU consumed 469bcm, says BP, and this demand is likely to decline in the future.

In 2017, developed countries for the first time installed more solar and wind than fossil fuel power capacity. This was a symbolic tipping point with major implications for energy security politics. The view that countries will secure their energy supply simply through more pipelines is becoming obsolete.

In November 2018, the European Commission adopted a long-term strategy for a climate-neutral Europe by 2050. All EU member states except Poland have adopted the climate-neutral target – even Warsaw is slowly coming around to the idea – and the EU is likely to soon approve the 2030 55% reduction target. The Commission’s latest offering in November 2020 was its EU Strategy on Offshore Renewable Energy, which proposes increasing EU offshore wind capacity from 12GW today to 60GW by 2030 and 300GW by 2050.

These ambitious climate targets, and the growing determination of Europe to see the development of zero-carbon technologies as a global race it should not lose, will make the natural gas infrastructure battle between the US and Russia even more out of place and time.

Time for US to change tack

The EU is setting a clear and ambitious path for moving out of fossil fuels, significantly reducing gas use and planning to replace remaining consumption with biogas and green hydrogen. As this process accelerates, Europe will increasingly move away from Russian energy dependency (though cooperation between Russia and the EU to develop new energy technologies is likely). However, for this trend to be in line with the Paris Agreement and to break the ability of Russia to use energy exports for political means, the EU needs US support.

By focusing almost entirely on natural gas in terms of its energy exports, the US simply fuels an infrastructure proliferation race that will continue to produce stranded assets as a monument to governments’ miscalculations.

Added to all this are energy security threats, which are not disappearing but changing with the technological revolution. Cyberattacks on power systems are happening every minute and expanded electrification and digitalisation will further increase these risks. Dependency on critical rare metals, data, patents or capital is becoming much more relevant than controlling oil and gas reserves or half empty pipelines.

Our policies, institutions and strategic thinking are not designed for these new energy security realities. They need adjusting domestically and globally. If the US wants to reduce Europe’s energy dependency on Russia, it should focus much more on cooperating on cybersecurity and supporting the integrated European power market, renewables, intelligent energy demand-side response, transport electrification, energy storage, hydrogen and energy efficiency.

The irony is that by supporting Europe’s build-up of gas infrastructure, the US restricts its own economic interests in the region. The new wave of energy-related technologies can generate much more US business in the EU than reliance on LNG exports that will always find it difficult to compete with Russian pipeline gas.

The EU should open a new energy security dialogue with the US, aligned with the carbon neutrality goal and much more focused on cooperating on research and zero-carbon-related industries. That is where future opportunities, and threats, lie. The new US administration is likely to be much more receptive to such an approach. John Kerry, the newly named climate envoy of President-elect Joe Biden, would be wise put carbon-neutral energy security at the top of his EU diplomatic priorities.