On Friday, the US and EU came forward with a pledge to cut global methane emissions by at least 30% by 2030, across all sectors. With this, the US is striving to re-establish itself as a leader on climate action and the energy transition. It co-developed the pledge with the EU as the “big climate deliverable” at the first Major Economies Forum on Energy and Climate since Donald Trump came to power. 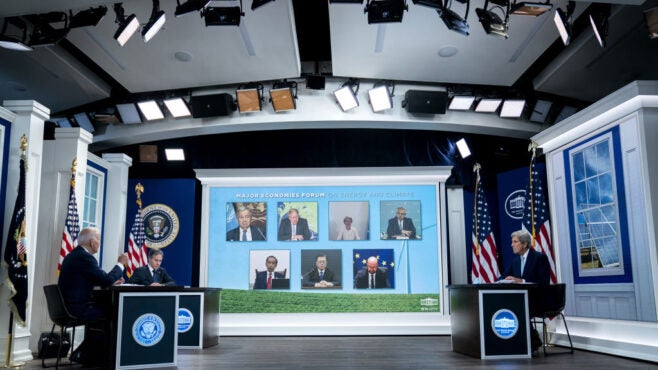 (From left): US President Joe Biden, Secretary of State Antony Blinken and Special Presidential Envoy for Climate John Kerry during the Major Economies Forum on Energy and Climate in Washington, D.C. on 17 September 2021. (Photo by Stefani Reynolds/Bloomberg via Getty Images)

Methane, the second-biggest contributor to human-caused global warming, has not been at the top of the global climate and energy agenda for a long time. Yet it is increasingly under scrutiny for its potential to tip the planet over safe levels of greenhouse gas emissions faster than expected. Methane stays in the atmosphere for less time than CO2, but its global warming potential is 84 times higher over 20 years. This makes the Global Methane Pledge a necessary step towards climate safety.

Several larger emitters, which together account for about 20% of global methane emissions and half of the global economy, aside from the US and EU have now declared their intent to join the pledge, among them Indonesia and Mexico – a good start, but not enough by far. If the goal is to achieve a 30% emissions reduction, major emitters such as China, Russia, India and Brazil, which together account for almost 40% of global methane emissions, must be part of it. There needs to be a concerted diplomatic effort to extend the group of signatories to at least some of these countries by COP26, when the pledge will be officially signed.

Aside from the “critical mass” of countries joining, a transparent and independent emissions measurement and monitoring system is a must, to ensure the credibility of this regime. The current data on methane emissions is scattered, varies in quality and comes from different sources, including the periodic emissions inventories reported by national governments to the UN Framework Convention on Climate Change, public-private partnerships such as the Global Methane Initiative and the UN-led International Methane Emissions Observatory (IMEO).

To avoid bias in emissions accounting – which data provided by national governments or the energy industry might have – the new pledge’s signatories should direct their support to an independent platform such as the IMEO.

US President Joe Biden called the 30% reduction “ambitious but realistic”. Cutting methane emissions by nearly a third can be done at net zero or very low cost via direct measures applied in the energy, waste and agriculture sectors. Such measures include leak detection and repair, control of fugitive emissions in upstream oil and gas, wastewater treatment, and improving animal health and husbandry. However, limiting global warming to 1.5°C requires a methane emissions reduction of about 45% by 2030, a recent assessment by UNEP shows.

Delivering that “last 15%” will require indirect or additional measures to make energy and food consumption, waste production and our very lifestyles more sustainable. Such measures amount to wider decarbonisation efforts, such as energy efficiency, scaling up renewables and improved recycling, that need to be embedded in national energy, industrial and climate policies. These are politically more difficult to agree in an international commitment. While outside the scope of this pledge, the difficult 15% needs as much attention on the global climate agenda and warrant dedicated support.

Whether through direct or indirect measures, the energy sector arguably has the highest potential for rapid, cost-efficient methane emissions reductions. Countries with a high share of energy-related methane emissions – most of them fossil fuel producers such as Qatar, Russia, Turkmenistan, UAE and Saudi Arabia – have an opportunity to step up their act.

As is always the case with international commitments, this pledge is but a signal that the world’s major economies are ready to act upon the long overdue methane problem. It must be accompanied by the right governance to monitor and implement the pledge, as well as build political momentum for it.

Second, dedicated reduction goals (most importantly in the energy sector) must be introduced at national level in major emitting countries. The pledge must furthermore be complemented by an offer of support to developing countries that might otherwise be hesitant to join the effort.

Third, the EU and US need to provide the capacity for diplomatic outreach to follow up on the pledge. They need to bring traditional “oil and gas diplomacy” into line with the imperative of reducing emissions from oil and gas.

Finally, and most importantly, although the focus on methane emissions is long overdue, neither the pledge nor its related policies can replace the effort to decarbonise the global economy. The most effective way to curb greenhouse gas emissions in the energy sector is to reduce the demand and supply of fossil fuels by shifting investments from oil and gas to clean energy systems.

Topics in this article: Comment, EU, Gas, Methane, Oil, Oil and Gas, US