When the European Commission publishes its strategy to reduce global methane emissions on 14 October, there won’t be the usual pattern of climate campaigners pushing and industry resisting.

That is because both sides agree on two essential facts: there isn’t enough data on methane emissions, and it is high time the problem of methane leakage in oil and gas drilling and transportation was solved. These types of methane emissions, which are the main focus of the strategy, according to a leaked draft seen by Energy Monitor, are essentially an unnecessary accident, pouring profits out of old leaky pipes – and they are an accident that is up to 87 times more harmful to the climate than CO2.

“Methane leakages are a safety issue,” says François-Régis Mouton, EU affairs director for the International Association of Oil & Gas producers (IOGP). “For decades our industry has been working very hard to reduce methane leakages as much as possible, especially on offshore platforms, because they can cause an explosion – but we still need to do quite a bit.” 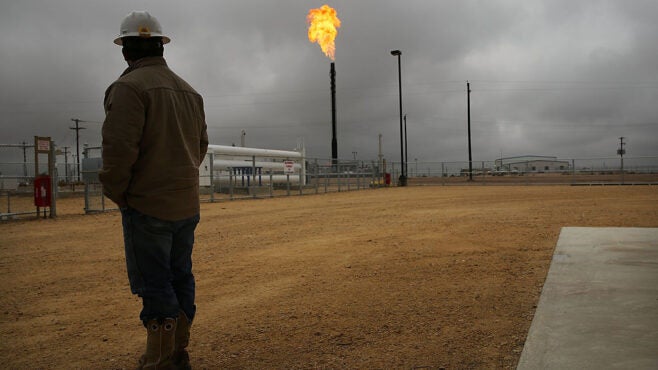 Flared natural gas is burned off in Texas. (Photo by Spencer Platt/Getty Images)

The problem so far has been that it is very difficult to tell where these leakages are taking place. The largest and most obvious ones have already been taken care of; it is the many small leaks that are harder to detect. However, new technology using satellites, recently outlined by the International Energy Agency, has made the problem more solvable than ever before, and the EU’s new strategy will take this into account.

Why an EU methane strategy will have global impact

“I expect the strategy will show a clear understanding of how urgent and solvable the issue is,” says Poppy Kalesi, global energy director at the Environmental Defense Fund, a non-profit. “I think the strategy will make it clear this is an issue we need to solve now, not in 2030. It will provide clarity on where things are going in terms of setting clear sustainability and methane performance standards for all those wanting to sell gas in the EU market. That is domestic producers and third country suppliers.”

Although emissions mitigation efforts in the energy sector will be the focus of the EU strategy, in reality the sector only makes up about 12% of total EU methane emissions. The vast majority of them come from agriculture and waste, which prompts the question: why is the EU focusing on such a small part of the emissions?

The answer is two-fold. As difficult as methane leakage has been to detect and stop, it is still the lowest-hanging fruit when it comes to tackling overall methane emissions. The Commission hopes that by setting regulation for gas imports it can tackle methane emissions from the energy sector globally.

Methane is the second-biggest greenhouse gas contributor to climate change after carbon dioxide, but its impacts are 84–87 times greater than CO2 in a 20-year timespan, and 28 times more in a 100-year timespan, says the Intergovernmental Panel on Climate Change Fifth Assessment Report.

Forty per cent of these emissions are not from humans or animals and can’t be avoided. They occur naturally in places like the Russian permafrost – although research shows man-made climate change is increasing these emissions as permafrost melts. Of the remaining 60% that are anthropogenic (from humans and animals), about half comes from agriculture – most famously from cow burps.  They also come from manure management and rice cultivation. About 20% of anthropogenic methane emissions come from waste – mostly landfill sites and the treatment of sewage sludge.

About a quarter of anthropogenic methane emissions come from a variety of sources in the energy sector. Methane can leak from coal mines for several decades after they have been closed. Emissions also come from leakages in transmission pipelines, ships and distribution systems, but the biggest area of focus is upstream leakages that happen at oil and gas drilling and production sites. They can accidentally leak, or they can be released intentionally into the atmosphere, a practice called venting. These ‘intentional leaks’ are the most common.

Venting is when unwanted gases produced during the extraction of coal and oil are released because they present a safety risk and because companies think they don’t have value. The excess gas has to go somewhere. To mitigate the climate impact of venting, the gases can be ‘flared’ to produce less-intensive CO2 instead of methane, but even when flared or burnt, methane can still escape due to incomplete combustion.

Forty per cent of methane emissions in the energy sector come from solid fuels, 31% from fuel combustion and 29% from leaks and venting in the production and transport of oil and gas, says the Commission.

By and large there is agreement in the industry that venting is often wasteful because that methane gas can actually be harnessed and sold for a profit; for instance, to be used for transport. There are now low-cost alternatives to avoid venting, but they have yet to be deployed at scale. The companies are burning money, but so far the incentives haven’t been there to find substitutions.

While agriculture and waste will be mentioned in the Commission strategy, the energy sector remains the focus for action. The EU’s 2030 Impact Assessment for non-CO2 emissions indicates that the most cost-effective methane emissions savings are from the energy sector.

“Upstream oil and gas operations generally show a variety of negative cost mitigation options, while a large number of mitigation options at near zero cost are available throughout the whole sector,” the draft states.

The strategy will propose two concrete pieces of legislation: new requirements on harmonised monitoring, and a leak detection and repair requirement on all domestic gas producers and operators of gas infrastructure.

On monitoring, the strategy largely recognises the efforts the industry has already been making and seeks to standardise it. This includes the voluntary Oil and Gas Methane Partnership launched with the UN Environment Programme in 2014, and the guiding principles multi-stakeholder platform supported by industry and researchers.

“It is extremely important to improve the accuracy of the data,” says IOGP’s Kamila Piotrowska. The cost of new technologies to detect leaks and find alternatives to venting is rapidly decreasing. “The technology is now accessible to more players. There is more and more research on methane emissions.”

The guiding principles not only share best practices, they also demonstrate how to do a cost/benefit analysis for solving the leakages, she adds.

What the data shows so far is that the vast majority of leakages are taking place outside the EU because there isn’t much oil and gas drilling in Europe. However, EU regulations could have a major effect on reducing them if they require imports to meet certain standards. 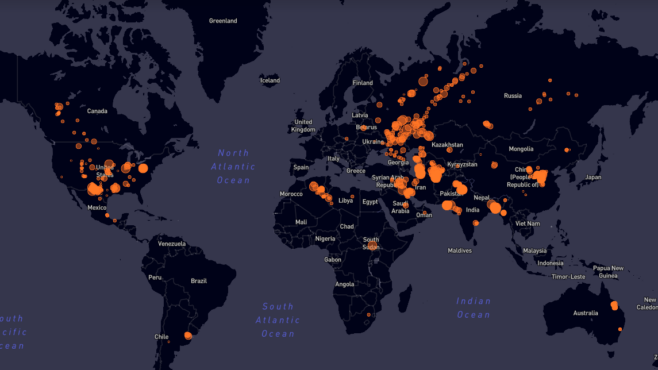 “The EU buys about 47% of internationally traded gas,” says Kalesi. “This makes it the largest customer for gas products. The largest [methane] emitters are Russia, the US and Algeria – these countries are also the EU’s main suppliers.”

So far, she says, research on leakages and venting has been treated as a bit of a “niche issue”, given that they represent a relatively small proportion of overall greenhouse gas emissions – but they are also easily solvable. All it would take is some firm regulation by a powerful buyer to get this problem fixed.

“Europe has huge leverage to pressure some of the world’s largest emitters by virtue of being the customer,” she adds. “Fifty per cent of EU imports are consumed in Germany and Italy, but neither of them alone could have these conversations with Russia or the US, either at a government or company level. To us, the EU added value is two-fold; it allows collective leverage in global collaboration and it boosts the science.”