Stopping new fossil fuel-burning infrastructure alone is not enough to limit rising global temperatures. Policymakers, companies and consumers must be willing to tackle emissions from existing sources of planet-warming pollution, too, including the methane leaked from oil and gas production.

With CO2, the scale of the challenge is formidable, but known. How much CO2 is emitted to the atmosphere can be worked out from the number of gallons of petrol burned in a car. But how much methane, the primary component of natural gas, leaks from the vast network of wells and platforms, pipelines and ships that produce and transport oil and gas across the globe is uncertain. Research published in March 2021 by Harvard University’s School of Engineering and Applied Sciences found methane emissions from oil and gas production are much higher than the US Environmental Protection Agency estimates.

Further, given that methane is 84–87 times more effective at trapping heat than CO2 over 20 years, policymakers have an extra incentive to tackle it first. 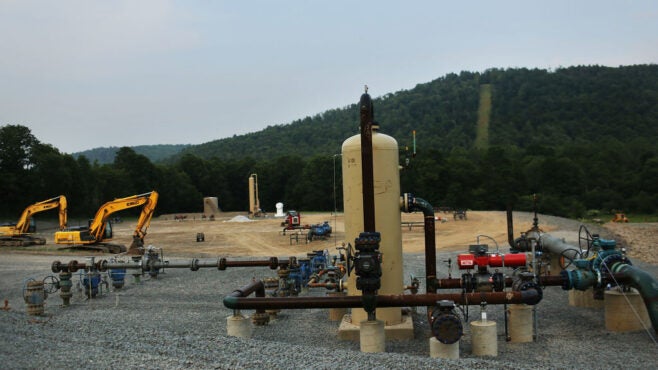 Equipment used for the extraction of natural gas at a hydraulic fracturing site in South Montrose, Pennsylvania, US. (Photo by Spencer Platt/Getty Images)

Oil and gas production is responsible for an estimated 84 million tonnes of methane emissions each year, equivalent to seven billion tonnes of CO2, says MiQ, a global non-profit partnership between Colorado-based think tank RMI and London-based research company SYSTEMIQ. Researchers at MiQ are convinced, however, that emissions transparency and a price signal will move the oil and gas industry to adopt best practices that could slash methane leaks by at least 75% by 2030.

“Out of those seven billion [tonnes], at least five billion can be addressed this decade with existing technologies,” says Georges Tijbosch, a senior advisor with MiQ. “What is missing is the pressure to do this because it is a small percentage. It is the small tweaks that need to take place in the industry. This can be addressed, relatively fast and efficiently, and at reasonable costs. What is missing is a signal of how to address it.”

MiQ believes it has come up with a way to deliver that price signal. Researchers at the organisation have developed standards – voluntary at the outset but designed for adoption by regulators – that rely on independent third-party audits of methane emissions from natural gas assets. A life cycle assessment of natural gas emissions from the well to the customer will enable gas to be sold with ‘MiQ Certification’. A grading system – ‘A’ for gas with the lowest methane emissions, ‘F’ the highest – confers an easily understood rating based on three metrics: methane intensity, company practices and methane detection.

The goal is to establish a system where traders anywhere in the world can shop for batches of natural gas where the price is based on emissions performance not geography as is the case today. MiQ’s bet is that clarity on emissions performance will give an edge – and price premium – to gas from producers that have taken measures to curb methane leaks.

“I recently spoke to one of the heads of LNG [liquified natural gas] trading at one of the oil majors,” says Tijbosch. “His view was simple: ‘I want to be able to compare all the LNG liquefaction plants across the globe. I want to know this one is an ‘A’, that one is a ‘B”, that one is a ‘C’’, but currently he can’t compare on methane emissions.”

Several US energy companies have already agreed to seek voluntary certification under the MiQ standards. Pittsburgh, Pennsylvania-based EQT Corporation will seek certification by the end of 2021 for the natural gas produced from more than 200 of its wells in western Pennsylvania. Northeast Natural Energy (NNE), a Charleston, West Virginia-based natural gas producer, will certify its entire operating field of 100 wells.

NNE will use technology from Avitas, a subsidiary of the Houston, Texas-based oilfield services giant Baker Hughes, to monitor methane emissions at its wells. Avitas’s LUMEN technology uses ground-based and aerial drone-based systems to create a “digital mesh” network around oil or gas facilities to detect methane leaks. NNE’s MiQ-certified natural gas should be available by the end of the year. Oklahoma City-based oil and gas company Chesapeake Energy Corporation announced plans in July 2021 to seek MiQ certification of its natural gas production in two US shale basins.

It has been a long and arduous process, but in the end, it is going to be worth it.” Brett Loflin, NNE

For NNE CEO Mike John, pursuing MiQ certification is about transparency – for his own company and eventually for the entire industry. “The path forward is one where we are measured; where everybody is measured,” he says. “We are a relatively small company, but to the extent we can step out as part of the early group, we feel like it could help push the whole process forward.”

MiQ certification entails a rigorous vetting process. “It has been a long and arduous process, but in the end, it is going to be worth it,” says NNE vice-president for regulatory affairs Brett Loflin.

He says NNE has made “many thousands” of pages of documents available to MiQ, auditors and inspectors. “Trust me,” he adds, “they have asked us for about every type of document you can imagine”, on waste generation and disposal, greenhouse gas emissions and calculations to determine CO2-equivalent emissions. “Our hope going through this process is we can identify more techniques, more procedures where we can continually reduce the emissions that we generate,” he says.

MiQ certification is an ongoing process. “We will have to be recertified on a yearly basis,” says CEO Mike John. “It is not like we will just go through the one time. It is going to be continual improvement, continual documentation, development of policies.”

Towards a global regime

MiQ’s initial standard was developed for upstream oil and gas companies focused on exploration and production in the US. The organisation is now working to develop standards for facilities and equipment across the oil and gas supply chain, and to encourage companies outside the US, including state-owned oil companies, to seek certification.

“We have started with upstream because that is where most of the methane emissions take place,” says MiQ’s Tijbosch. The standard for LNG facilities will be ready after this summer. He says MiQ is talking with dozens of oil and gas buyers, sellers, producers and traders about the standards.

“Over the next two or three years, we foresee a large part of tradable gas can be certified,” he adds. “There will be some gigantic snowball effects once the pressure is on to have that level playing field. Everybody is going to have to use something like this to determine methane emissions.”

Bolstering the prospect that methane emissions performance standards are adopted by US oil and gas producers, the industry’s most powerful voice in Washington, D.C., the American Petroleum Institute (API), says it backs the standards. “API supports the ongoing development of markets for ‘differentiated’ natural gas, as natural gas will continue to play a critical role in a lower-carbon energy future,” says API’s Jessica Szymanski. The trade group intends to push for wider industry adoption of certification standards like those developed by MiQ, she adds.

MiQ is also pitching the standards to regulators. In April 2021, the group published a proposal for how its standards could “provide the backbone” for regulations for imported natural gas under an EU Methane Strategy.

The goal would be to reduce the emissions intensity for methane imported into Europe, or produced domestically, from the global average of 1.5% to 0.2% or less over five years. Regulators could employ carrots or sticks to push the market towards lower methane emissions – incentives for natural gas with low emissions, and a tax or fee on natural gas with high emissions.

EU climate action and energy spokesperson Tim McPhie confirmed European Commission staff have met with MiQ representatives. “We are considering a whole range of different means to achieve further reductions in methane emissions in the energy sector,” he says. “The Commission’s intention is to publish legislative proposals to address methane emissions before the end of 2021, following on from last year’s methane strategy.”

Tijbosch says MiQ welcomes regulators’ interest and sees the potential for its standards to become a de facto global norm for methane regulation. “We would love for regulators to pick it up,” he says. “Once there is a framework, it becomes relatively easy to regulate because now you have something to measure. That has been the big thing missing.”

Topics in this article: Gas, Methane, US