Europe’s prime ministers and presidents were supposed to discuss the specifics of how they will reach the EU’s 2030 and 2050 climate targets at a summit in Brussels, Belgium, on Tuesday, but as has happened so many times in recent years, current events got in the way.

The diverting of a Ryanair flight and arrest of an opposition journalist in Belarus took precedence at the summit, leaving leaders with no time or appetite to engage with Polish demands about how the climate effort will be spread out among EU countries. In the end, they issued bland conclusions with no decisions, deleting whole paragraphs from draft conclusions that might have run the risk of sounding like a genuine position. 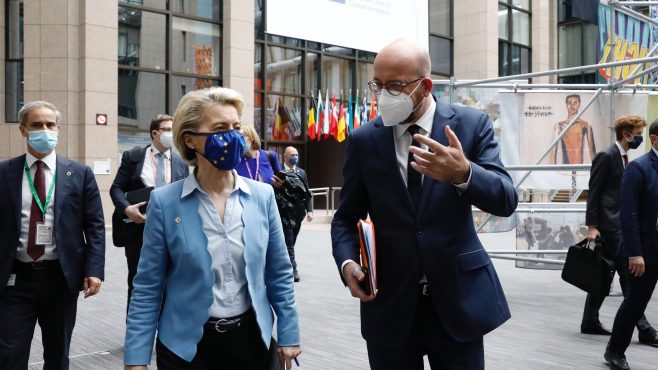 European Council President Charles Michel tried to put a brave face on the outcome at his closing press conference. “We have affirmed our common goals, which are ambitious,” he insisted. The reality, however, is that nothing has changed since the new 55% emission reduction target for 2030 was pushed over the line at a bruising December summit after overcoming Polish opposition.

Indeed, climate discussions at the European Council (the body of 27 national prime ministers and presidents) have taken on a Groundhog Day feel.

Decisions on contentious issues are bumped up from the usual decision-making level (the Energy Council of 27 national energy ministers) to prime ministerial level. They are put on the agenda of the next European Council summit, which may be months away because they only happen four times a year. At the summit, Poland (sometimes joined by others) kicks up a fuss. Leaders put off making a decision because it is too much of a headache.

“We can’t use the same measure for emissions reduction measures for a building in Sofia and one in Amsterdam.” Michał Kurtyka, Polish climate minister

In this instance, Polish Prime Minister Mateusz Morawiecki insisted the new 55% reduction target for 2030 be divided up in a way that makes life easier for countries with lower GDP. He also pushed for changes to planned new rules for sectors outside the EU Emissions Trading System to ease the burden on poorer EU countries.

“We can’t use the same measure for emissions reduction measures for a building in Sofia and one in Amsterdam,” said Polish climate minister Michał Kurtyka after the summit.

National leaders said it was premature to discuss such proposals before the European Commission unveils its ‘Fit for 55’ policy package in mid-July. “To have that discussion now, in a vacuum, wouldn’t make sense,” said Belgian Prime Minister Alexander De Croo. However, the Commission is looking to member states for guidance on what should be in that package.

Many are questioning why these discussions ever take place among prime ministers and presidents instead of being left to environment and energy ministers. This pattern of scheduling climate talks at European Council summits and then putting off any conclusion frustrates climate campaigners and the business community, which want certainty over future policies.

“From the Council you want strong endorsement of a direction that supports increased ambition for 2030,” says Ursula Woodburn from CLG Europe, which works with companies advocating action on climate change. “It is not so great if [the prime ministers and presidents] talk about every single detail of the policy. That should be discussed by the Parliament and ministers. Otherwise it shuts down space for the democratic process.”

This sentiment was echoed at this week’s summit by some prime ministers. Most notably, Italian Prime Minister Mario Draghi complained to other leaders that most of the scheduled climate discussion should have been dealt with by environment and energy ministers.

Others complain President Michel is putting too much on the European Council’s agenda as part of his continuing power struggle with Commission President Ursula von der Leyen. They say he is trying to prevent the Commission from setting the agenda in any policy area.

Michel’s overburdening of Council agendas means “ministers now assume everything is going to be sent up to heads of state and government, and so they don’t feel they have the ability to decide these issues [anymore]”, says one national official from the Council who preferred to remain anonymous. “Many of these issues are too technical to be dealt with at European Council level. They should only be giving signals on the political direction.”

The result is inaction, as we saw this week. There will be many very technical issues to sort out in the coming months in order to instrumentalise the 2030 and 2050 targets, particularly after the Fit for 55 package sees the light of day in July. If Morawiecki or anyone else holds these talks hostage in the Council, potentially aided by power politics between the EU institutions, climate legislation will be slowed or diluted and the EU will struggle to reach the targets necessary to meet its commitments under the Paris Agreement.

The showboating and power politics at these Council summits in Brussels needs to stop. President Michel and national leaders should leave it to the elected representatives in the European Parliament and the national ministers in the Energy and Environment Councils to determine how the EU will meet its climate targets.