When Ursula von der Leyen gave her first state of the union speech to the EU Parliament on Wednesday, she chose to make climate the policy the centrepiece. However, her proposal to increase the EU’s 2030 emissions reduction target from 40% to “at least” 55% drew only mild applause from Members of the European Parliament (MEPs) in the chamber.

That may be because her proposal, which sits halfway between the 65% demanded by Green politicians and climate campaigners, and the 40% preferred by conservatives and much of industry, is designed to excite neither extreme. Following the announcement, both sides painted a stark picture of what 55% would mean. 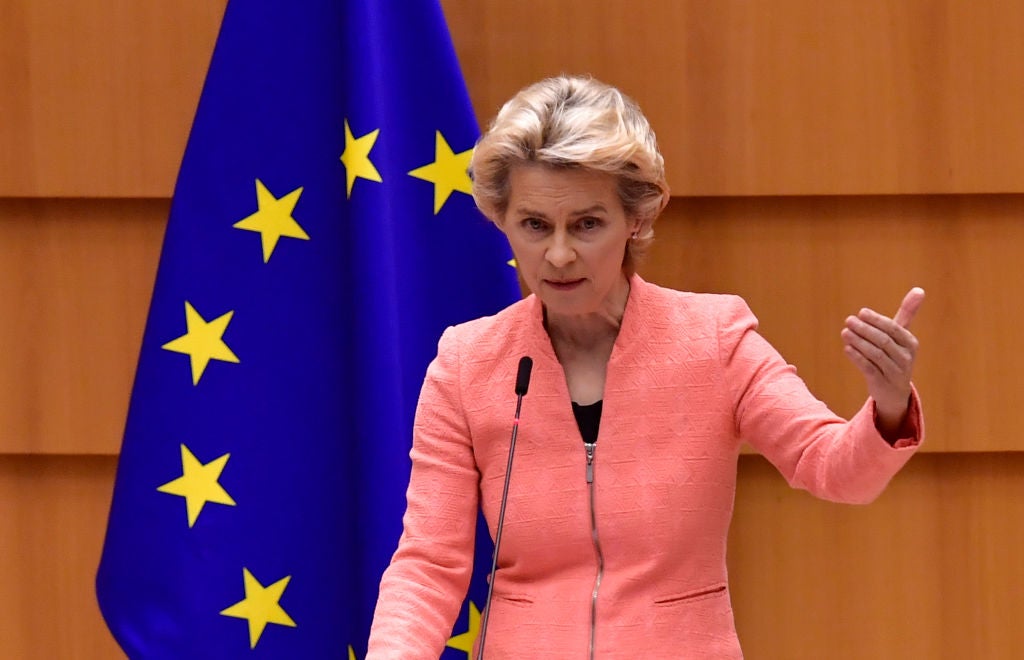 “This target would condemn us to a devastating climate crisis,” responded Sebastian Mang from Greenpeace. “There is no middle ground when it comes to science.”

The 40% target is already “the most ambitious climate policy in place” in the world, said Eurochambers, the umbrella organisation of European chambers of commerce. Raising it would hurt businesses and consumers, while making the EU uncompetitive in the global economy, it claimed. So what would be the real effects of raising the EU target? MEPs and national governments, which must both approve the target rise by majority vote for it to become law, have a mountain of studies to sort through to arrive at the answer.

The target must be raised for the EU to meet its commitments in the Paris Agreement and reach its goal of lowering EU carbon emissions to net zero by 2050, Von der Leyen told MEPs. That binding target forms the legal basis of her European Green Deal published in December 2019.

“I recognise this increase from 40 to 55 is too much for some, and not enough for others,” she said. “Our impact assessment clearly shows that meeting this target would put the EU firmly on track for climate neutrality by 2050 and for meeting our Paris Agreement obligations. And if others follow our lead, the world will be able to keep warming below 1.5°C.”

The data indicates that Von der Leyen is correct to say the current 40% target is not in line with meeting the 2050 goal, but whether her proposed 55% target is enough to do the trick is more complicated.

Data from the European Environment Agency, a trusted EU regulatory body, shows that the 40% target leaves a large gap to meeting the trajectory required to avoid catastrophic climate change set out by the UN Environment Agency (UNEP). A study by the consultancy Climact for the European Climate Foundation looked at various target-raising scenarios and found that 55% could get the EU to its 2050 goal, but it would mean extra efforts on top of already pledged emissions reduction actions.

Lawmakers from Von der Leyen’s own centre-right European Peoples Party, the largest bloc in the European Parliament, are clear that any increase in the emissions reduction target must not harm economic growth, particularly since no other major economies have policies in place to reach even a 40% reduction goal, let alone a net zero goal.

“We expect the European Commission not to give in to the demands of the Left in the European Parliament, who are asking for unreasonably high CO2 emission-reduction targets,” said German MEP Peter Liese, environment spokesman for the European People’s Party (EPP).

“The EPP group wants to set the CO2 emission targets to at least 50% by 2030 with an option to increase this to 55%, if an impact assessment shows this is economically feasible,” he said. “We want a market economy and as few new rules as possible. We do not agree with simply increasing the national targets by 15%”.

Only “realistic” CO2 targets will allow Europe to remain an industrial continent, he said. Opponents have pointed out that the EU isn’t even on track to meet the existing 40% target (see below), so any talk of raising it may be premature.

“If we reach climate neutrality, but have no more industrial jobs to offer, we are not a role model for China, India or the rest of the world,” said Liese. “Without these emerging markets making similar CO2-cutting efforts, it will not be possible to achieve the Paris climate goals.”

Von der Leyen acknowledged these concerns in her speech.

“I am fully aware that many of our partners are far away from that,” she said. “But our impact assessment clearly shows that our economy and industry can manage this.”

The Commission is proposing a carbon border tax to reduce the risk of industries moving out of Europe to avoid the EU’s more stringent climate regulation.

“This Carbon Border Adjustment Mechanism should motivate foreign producers and EU importers to reduce their carbon emissions, while ensuring that we level the playing field in a WTO-compatible way,” said Von der Leyen. As a leader in clean technology, Europe will reap economic rewards, she stated.

Many business leaders support Von der Leyen’s 55% proposal, but would be hesitant to back anything higher. More than 150 businesses and investors sent an open letter to EU national governments this week calling for the target to be raised to at least 55%. The signatories include Microsoft, IKEA, Deutsche Bank, Unilever, H&M, Google, EDF, Signify and Apple.

“The right decisions now can help create and protect healthy, thriving and fair communities and secure a roadmap for a prosperous economy,” the letter states. “From a business and investor perspective, clarity on the net-zero transition pathway and timetables for each sector, as well as policy that enables substantial investments in carbon neutral solutions, is essential. This in turn would provide us with the confidence needed to invest decisively at the necessary pace and scale to reduce emissions, create decent green jobs, drive innovation, and accelerate the rebuilding of a resilient zero-carbon economy.”

While large business associations have to cater to the lowest common denominator among their members, ad hoc coalitions have the flexibility to let individual companies show their support for bolder climate action. And many of those companies are unhappy with the messaging being put forward by their industry associations in Brussels and Washington that suggests climate action and economic success are somehow opposed.

“The choice between a healthy planet and good business strategy has always been a false one, and we have proved that with a company that runs on 100% clean energy and a supply chain transitioning to do the same,” said vice-president of environment, policy and social initiatives at Apple Lisa Jackson. “As Apple works towards 100% carbon-neutral products and a carbon-neutral supply chain by 2030, we will continue to call for the strong global targets we need to reduce greenhouse gas emissions and protect this planet for future generations.”

Any rise from 40% is better than nothing, say climate campaigners, but for them Von der Leyen’s proposal doesn’t go far enough.

“The 55% goal must be seen as a minimum baseline, as much more needs to be done to avoid dramatic climate change and its growing economic costs,” said Wendel Trio of Climate Action Network. “Some member states already have higher goals, and so does the European Parliament. We believe more is possible. The higher the 2030 climate target member states agree on, the more opportunities to create clean jobs and revive our economies.”

The European Parliament’s environment committee voted last week to raise the 2030 target to 60%. If this is confirmed by the full parliament next month it will form the basis of its negotiating position with the Commission and the Council (national governments). The three bodies need to reconcile their different positions into a final law early next year.

Keeping the 55% ambition alive in the Council is going to be a difficult battle, say EU sources. Although about a third of countries have already said they support it, and some say they want it to go higher, a number of Eastern European countries, led by Poland, will fight fiercely against raising the target at all. The result will likely be a compromise of around 50%.

For MEPs this would be unacceptable.

“With the Green Deal, Commission president Ursula von der Leyen has taken a bold step forward and planted the seeds of a profound reorientation of EU policies,” said Philippe Lamberts, leader of the Greens in the European Parliament. “Facing up pressures against this, she made the Green Deal the core of the EU’s recovery plan. Now, as she herself says, is the time to put those words into action.”