Of the world’s 167 biggest-emitting companies, 111 have set a net-zero greenhouse gas (GHG) emissions reduction target, which would reduce CO2 equivalent emissions by 3.7bn tonnes a year by 2030, states an analysis by BloombergNEF. In 2050, this figure reaches 9.8bn tonnes, almost equivalent to China’s current annual emissions. 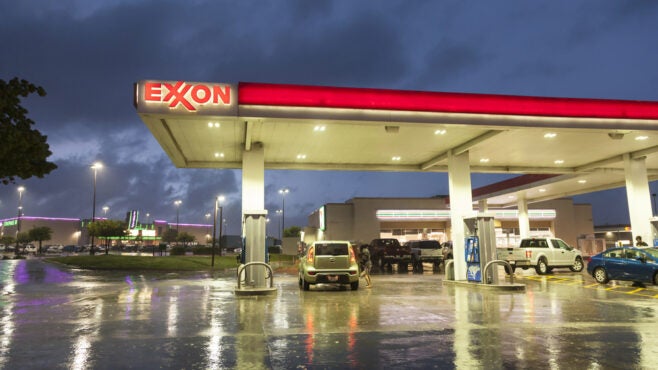 An Exxon petrol station in Dallas, Texas, in April 2016. Unlike Shell, Total and BP, ExxonMobil is yet to establish a net-zero target. (Photo by Philip Lange/Shutterstock.com)

The 167 companies, which collectively account for 80% of global industrial GHG emissions, have been identified by Climate Action 100+, a group representing more than 600 investors that are working with companies in their portfolios to cut emissions and improve climate reporting.

The oil and gas sectors are expected to represent more than one-third of these planned emission reductions, or 3.4bn tonnes of CO2-equivalent emissions. European majors such as Shell, Total and BP have all pledged to be net zero by 2050 and have started diversifying into low-carbon activities.

However, US oil and gas companies like ExxonMobil and Chevron are lagging behind, with no net-zero targets announced to date.

Only five of the 167 companies had set a net-zero target prior to January 2018, when the Climate Action 100+ initiative was launched, highlighting the effectiveness of investor pressure in driving climate action. Most companies have yet to disclose how they will meet their targets, however.