Caribbean electricity prices are among the highest in the world, due to the islands’ heavy reliance on imported, polluting diesel. The average cost of electricity is around four times higher than in rich nations such as the US. The isolated, small markets of these islands can make it a challenge to scale up any kind of energy, but many are increasingly looking to renewable energy to provide a cheap, home-grown and clean source of electricity.

This trend had led to a burst of solar and wind projects, but also a rising emphasis on the potential advantages of geothermal – a technology that provides both unique opportunities and unique challenges for these dispersed nations. 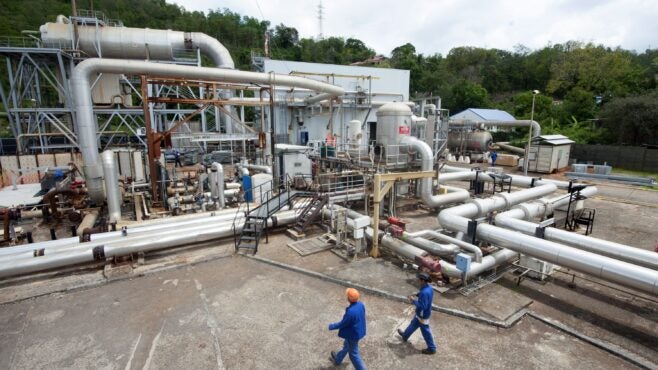 The 15MW geothermal plant in Bouillante, Guadeloupe, to date the only geothermal power plant built on a Caribbean island. (Photo by Helene Valenzuela/AFP via Getty Images)

At the most basic level, geothermal energy is heat energy that comes from the earth. It can be harnessed in several different ways, from ground source heat pumps and district heating systems to geothermal power plants. The latter is where the focus lies for the Caribbean.

Tech
Why hydrogen is not the answer to petrostates’ woes

“The Caribbean wants to become autonomous when it comes to its energy security, resilience and infrastructure,” says Marit Brommer, executive director of the Germany-based International Geothermal Association (IGA). “And they happen to sit on a volcano.”

Extracting geothermal electricity involves a series of costly steps, especially the drilling needed to find it and the power plant that must subsequently be built on top of the resource. Projects have struggled to get off the ground in several Caribbean countries.

“The question always revolves around if there is an industry partner willing and able to take up the exploration risk in those first instances,” says Brommer.

However, the prize for Caribbean islands for installing a geothermal power plant is also disproportionately large. The small size of Caribbean electricity systems makes it harder to balance a range of different variable sources of electricity. Geothermal’s ability to run as a source of cheap, baseload power around the clock makes it a good option.

“You need a technology that is 24/7, affordable, clean, but also that can be resilient with complicated weather,” says Christiaan Gischler Blanco from the Inter-American Development Bank (IDB). “Otherwise, you would still need a backup of heavy fuel oil or diesel.” In some cases solar farms on Caribbean islands have seen major damage from hurricanes, although work is also being done to improve their resilience in storms.

It also brings benefits for the local economy. Geothermal provides more than double the long-term jobs per powered household than wind, solar and gas, shows a 2019 analysis by the US Department of Energy, “Long-term geothermal jobs are generally operations and maintenance positions filled mainly by local workers,” the report says, and so wages are also likely to be spent locally.

“In geothermal there is job creation and also additional spin-off like heat generation,  which could be used by another industry,” says Gischler Blanco. “In solar and wind after construction there is low job creation.”

There is also the chance some geothermal sites in the Caribbean could end up generating far more than any individual island needs, unleashing potentially hundreds of megawatts of generation capacity compared with around 10–15MW used on each island, says Gischler Blanco. In the long term, this opens up the possibility of connecting islands via undersea cables or even generating and exporting green hydrogen with the excess power. “We have to look at the possibilities,” he says.  This could mean geothermal not just generates clean electricity for the islands themselves but also opens up potential new green industries.

So far the only geothermal power plant on a Caribbean island is a 15MW plant built in Guadeloupe, a French territory, in the 1980s. This could soon change, however. The potential of geothermal in the area has attracted the attention of an array of international climate funds, including from the World Bank, the Inter-American Development Bank (IDB), the Green Climate Fund and the UK foreign office.

A financing facility put together by the IDB and the Caribbean Development Bank offers a particularly interesting model to help developers in Latin America get over the large initial financial barriers of geothermal development. It involves giving climate funds as a grant to developers to explore geothermal potential, says Gischler Blanco. If they find the resource, the climate funds are converted to a concessional loan, meaning a loan with favourable conditions that the developers need to pay back. If no resource is found, the funds remain in the form of a grant. The model has already been used in St Kitts and Nevis and in St Vincent.

Dominica, the island furthest ahead in its development of geothermal power after Guadeloupe, is now being supported by a variation of this scheme.

Drilling supported by climate grants in the last decade has proven the island has a resource of around 10MW. However, the government has found it difficult to close a deal with any developer to build a geothermal power plant due to the high initial cost, despite the support of the World Bank. The IDB has therefore offered a concessional loan to the developer for the construction of the plant, says Gischler Blanco.

“The country is not the one who is getting the debt or the financial burden of the programme, it is the developer,” he says, underlining the need to avoid further indebting the oft-hurricane struck nation. The overall project will be a public private partnership with the Dominica government, which already owns the well and the land.

The deal is not yet approved by the IDB board and therefore not announced, but it is with a French consortium and is in the range of tens of millions of euros, says Gischler Blanco. “It is climate finance put to work,” he says. There are still a number of steps to go through, including an environmental impact assessment, but assuming these go to plan the plant would then take about a year and a half to build, making it the second to be built in the Caribbean.

Dominica aims to source 90% of its electricity from renewables by 2029. A Clinton Foundation report, released last year and endorsed by the Dominican government, highlighted geothermal as key to achieving this goal, showing that the technology could help Dominica reduce spending on electricity generation by 44% between 2020 and 2038.

Other Caribbean islands are facing different challenges. Some, such as Antigua and Barbuda, simply have no geothermal potential. St Kitts and Nevis is drilling, with new production wells set to be financed with the IDB facility. British overseas territory Montserrat has found geothermal resources and plans to use them as a principle electricity source. Martinique, a French overseas territory, which aims to be energy self-sufficient by 2030 by relying on renewable energy, is verifying the presence of a geothermal reservoir.

In one interesting development, a drilling project in St Vincent and the Grenadines found heat, but no permeability. Conventional geothermal technology harnesses water or steam heated by the Earth’s core, meaning it is impossible if the water cannot flow through holes in the rock sufficiently. However, the world of geothermal technology is in a period of serious innovation, and one potential solution to this problem could be “closed loop” technology. This involves injecting water from the surface down a pipe where it picks up heat underground, before returning to the surface to generate electricity. In Canada, technology company Eavor has already developed and is testing such a system. Closed-loop geothermal developers have only really begun to raise capital to test their technologies in the last one to two years, says Brommer. “That is a very exciting new area,” she says.

Globally, geothermal power largely remains a drop in the ocean when it comes to clean electricity. Just 90 terawatt-hours of electricity came from geothermal in 2018, about 0.3% of the global total. In contrast, wind provided 4.8%, solar 2.1% and hydro 16.2%.

Geothermal tends to be concentrated in certain countries, unsurprisingly given that it currently relies on natural fault lines. The US has the largest installed capacity, followed by Indonesia, Turkey, Mexico and New Zealand. The US, Indonesia and Kenya also have significant expansion of geothermal in the works.

Electricity generation from geothermal will triple by 2030, forecasts the Sustainable Development Scenario published by the International Energy Agency (IEA). However, its most recent tracking report shows the industry is not on track to reach this target, having only grown by 3% in 2019 rather than the required 10% a year.

However, Brommer is even more ambitious than the IEA. She wants to see 7–10% of global renewable electricity coming from geothermal by 2030, up from around 0.75% today – an ambitious goal considering other sources of renewables are growing at breakneck speed. Brommer says this is possible with the advent of new geothermal technologies such as enhanced geothermal systems, and slowly rising interest from the oil and gas sector.

There is still a lot to do, says Brommer.

“Is it feasible? Yes, from the resource point of view, I have no doubt,” she says. “But from an investment and policy standpoint, it is going to be quite a ride. If we would unleash the whole potential of geothermal, we could power up Earth.”

The wind power market has grown at a CAGR of 14% between 2010 and 2021 to reach 830 GW by end of 2021. This has largely been possible due to favourable government policies that have provided incentives to the sector. This has led to an increase in the share of wind in the capacity mix, going from a miniscule 4% in 2010 to 10% in 2021. This is further set to rise to 15% by 2030. However, the recent commodity price increase has hit the sector hard, increasing risks for wind turbine manufacturers and project developers, and the Russia-Ukraine crisis has caused further price increase and supply chain disruption. In light of this, GlobalData has identified which countries are expected to add the majority of wind power capacity out to 2030. Get ahead and download this whitepaper for more details on the current state of the Wind Power Market.
by GlobalData
Thank you.Please check your email to download the Report.
Topics in this article: Geothermal 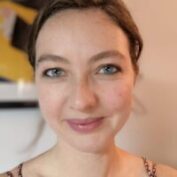 @jloistf
Jocelyn Timperley is a freelance climate and environment journalist based in Edinburgh. She reports on a wide variety of environment stories from science to policy to adaptation, and also edits at the BBC Future vertical Future Planet. She previously reported on climate policy for Carbon Brief.
SUBSCRIBED