After years of rapid growth and falling prices, wind and solar are now the lowest-cost source of new power generation in most of the world – and are expected to be the cheapest everywhere by 2025. Southern Africa should be an excellent location for renewable energy development, with plentiful sun, wind, land and growing electricity demand. Despite these excellent resources, however, renewables growth there is lagging behind the rest of the world.

Meanwhile, new gas and even coal generation continues to be developed in southern Africa, locking the region in to fossil fuel dependency for years to come. New or refurbished coal plants are under construction in South Africa, Botswana and Zimbabwe, while new gas is being built in South Africa, Mozambique, Namibia and Botswana. 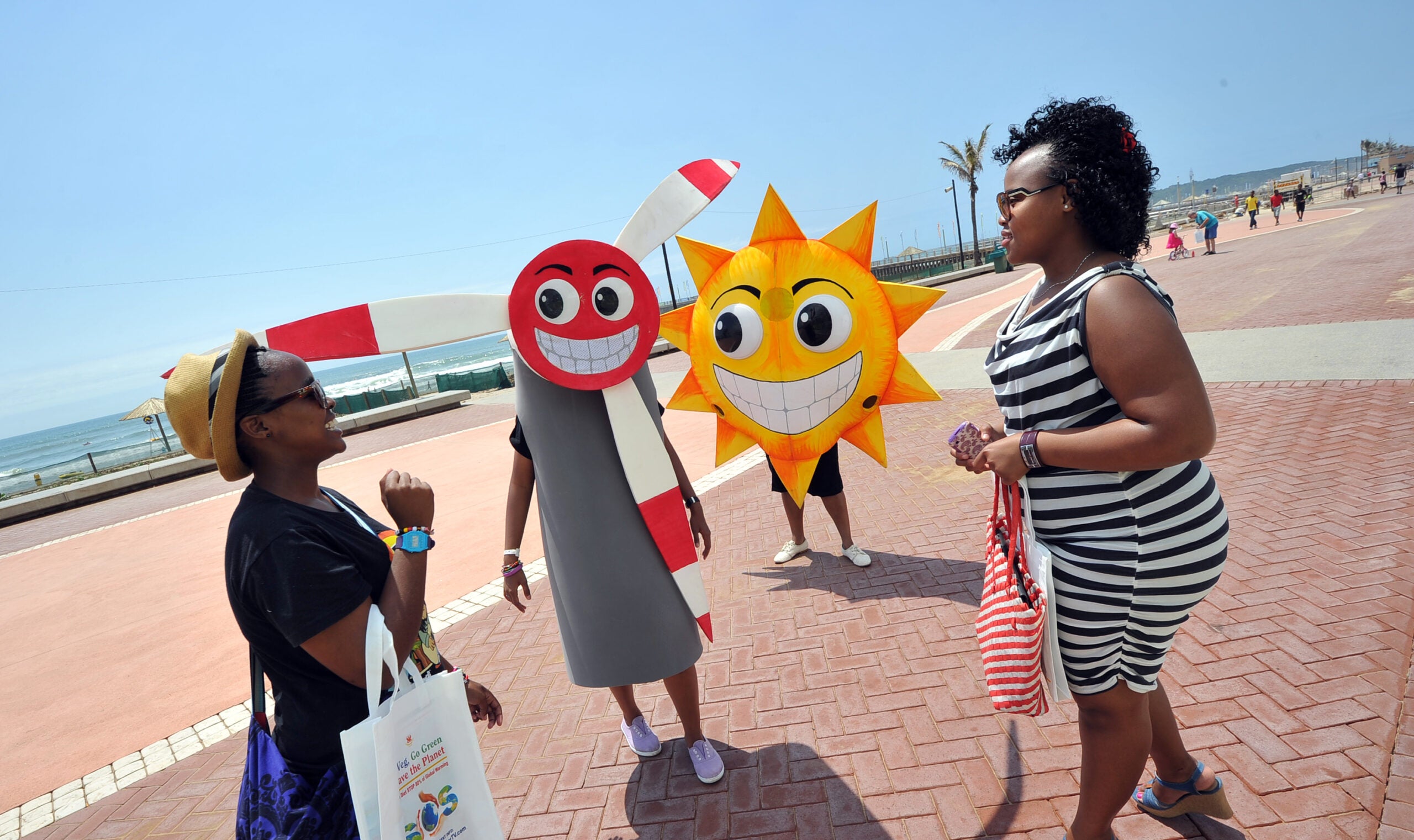 Greenpeace activists promote the use of renewable energy in Durban, South Africa. (Photo by ALEXANDER JOE/AFP via Getty Images)

Botswana and Namibia have announced plans to develop 5GW of solar between them over the next decade, a potentially transformational shift for power markets that currently have a combined conventional capacity of less than 2GW.

Mozambique and Malawi are building their first grid-connected solar plants, but wind and solar are set to remain a small portion of the grid mix: Mozambique’s power system master plan limits wind and solar to 10% of peak demand.

In South Africa, by contrast, a burgeoning renewables industry has ground to an almost total halt after a change in government policy. South Africa’s first renewable energy auctions in 2011 attracted international attention and led to a six-fold expansion of renewable energy capacity to above 6GW. No auctions have been held since 2014, however, and the renewables market has stagnated since then.

There are undoubtedly major challenges to developing renewables in southern Africa. As developing and emerging markets, they face higher costs of capital due to the perceived riskiness of investments in these markets. Higher financing costs are a barrier to all inward investment, but disproportionately impact wind and solar as nearly all of the project costs come upfront. This contrasts with gas and coal generation, where fuel costs play a bigger role.

Infrastructure can also be a problem. Weak electricity transmission and distribution grids make integrating the output of wind and solar plants more of a challenge. In parts of the region, poor road infrastructure can make sites more difficult to access, particularly in the rainy season. While land is plentiful, finding accessible sites close to transmission capacity is less easy.

These challenges have sparked the development of dozens of (often overlapping) renewables promotion programmes from donor governments and international institutions. These programmes focus on ‘de-risking’ financing in order to lower the cost of capital; on technical assistance for developing infrastructure and managing increased flows of renewables; and on reforming regulation to enable more renewables to enter the market.

However, these renewables promotion projects have not yet led to the desired transformation of energy systems.

“A plethora of de-risking programmes have been launched in the last decades to support African countries in this regard, though with limited impact,” found a major review by the Rome-based RES4Africa Foundation earlier this year.

The crux of the problem is that the barriers to solar and wind expansion in southern Africa are political, not just technical. Ultimately it will take more than information sharing and technical assistance to turn the situation around.

Domestically, the southern African renewables industry is still in its infancy, but its growth to adulthood is being stymied by opposition from entrenched monopoly incumbents supported by powerful elites. This situation is compounded – understandably – by pressure from mine and thermal power plant workers to protect jobs. In South Africa, opposition from domestic utility Eskom and concerns over the future of the 80,000 workers employed in the coal sector has combined to block what was once the region’s leading renewables programme.

Most renewable energy technical assistance programmes offered by international donors are exactly that: highly technical. They can address knowledge and capacity gaps, but rarely engage directly with the underlying politics. This contrasts with the more aggressive lobbying from gas and coal developers (and their host governments).

And although renewables support programmes are numerous, they often operate at a much smaller scale than the fossil economy. The UK’s signature renewables aid programme in Mozambique has a budget of $28m. At the same time, the UK’s export credit agency is underwriting $1bn of investment in natural gas development in Mozambique.

Though renewables are becoming cheaper, advocates need to tell a stronger story of local benefits in order to secure government support for faster deployment. Though renewable energy development creates construction jobs, wind and solar energy technology patents are overwhelmingly owned by companies in OECD countries and China, and currently most equipment manufacturers and project developers are based outside the region. This is a classic chicken-or-the-egg problem: to build a viable renewables industry in the region, a clear pathway for sustained growth of wind and solar is needed – but that won’t happen if governments do not see local benefits.

To overcome this impasse, governments and their international partners need to look beyond technical assistance to develop more compelling political propositions for how renewables can benefit the region. This should be based on a vision of a just transition for fossil workers and communities, universal energy access, cheaper power for citizens and industry, local jobs and the development of a sustainable renewable energy sector in southern Africa.

There are promising signs that this shift is starting to happen. In South Africa, unions and environmental groups are collaborating to develop shared principles for a just transition and campaigning to transform coal-based national utility Eskom into a renewable energy champion.

Internationally, the concept of ‘debt for climate swaps’ – in which international creditors offer debt relief in exchange for accelerated coal closures and a shift to renewables – is gaining momentum. This would enable southern Africa’s international partners to present a stronger offer than technical assistance alone.

With the right political conditions and regulatory frameworks in place, solar and wind power have the potential to expand rapidly in southern Africa. The alternative is a region permanently lagging behind in the global shift to renewable energy, burdened with higher energy costs, stranded assets and unnecessary emissions.