The biggest renewable energy success story in the last ten years is not measured in gigawatts, but in lives transformed. Off-grid solar represents a tiny proportion of global electricity output, but has brought access to lighting and other energy services to hundreds of millions of people worldwide. 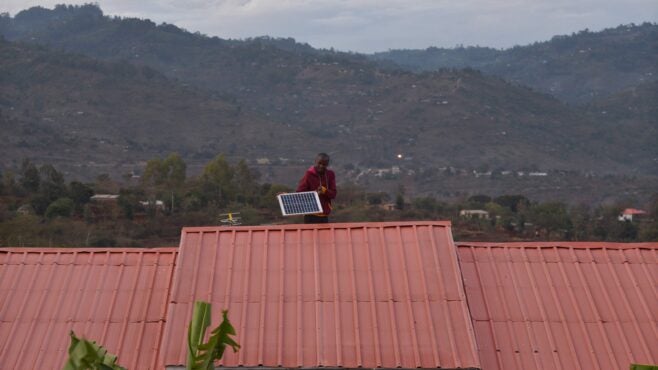 A man adjusts a solar panel on his roof in the village of Kwa-Mutisya in Machakos county, 100km south-east of Nairobi, Kenya. (Photo by Tony Karumba/AFP via Getty Images)

The growth of the off-grid solar market is based on catering directly to a large but much neglected consumer segment: poor rural households without access to grid electricity. These consumers have limited spending power but strong unmet demand for energy services, and the potential size of the market stretches to hundreds of millions of customers. While many of these households will eventually connect to centralised electricity grids, the glacial pace of grid expansion in many countries means that off-grid solar offers the best opportunity to expand energy access quickly.

This story of success, however, is on the edge of becoming a story of crisis. The economic fallout from the Covid-19 pandemic has been particularly hard on low-income consumers in developing countries – the same customers that underpin the off-grid solar market. As a result of this economic shock, sales and repayments have shrunk and dozens of off-grid solar companies are now on the brink of collapse.

If the sector can survive the immediate crisis, off-grid solar will play a key role in the post-Covid recovery for the least-developed countries by creating jobs and underpinning economic opportunities. As governments and international institutions begin to develop economic recovery strategies, a financial rescue mission for off-grid solar is needed to put the sector back on a solid footing.

The rise of off-grid solar

A decade ago, off-grid solar was a niche industry that barely existed. Since then, the sector has seen €1.5bn of investment. More than 180 million solar units have been sold, providing energy services to over 420 million people.

These products are on a completely different scale to other parts of the solar PV market. A solar home system may have a capacity of 10–100W. A domestic rooftop solar system in the US or Europe is 100 times larger at 1–10kW. The world’s largest grid-scale solar arrays are now over 2GW – or 20–200 million times the capacity of a typical off-grid solar home system.

The small scale of the product means that despite reaching hundreds of millions of customers, the total installed capacity of off-grid solar home systems globally was only 331MW in 2017 (slightly less than the total grid-connected solar capacity in Scotland, for example).

New ‘pay-as-you-go’ business models have been a core part of the rise of off-grid solar, making solar products affordable for low-income rural consumers. In Mozambique, where two-thirds of the population live on less than $2 per day and 70% lack access to grid electricity, a pay-as-you-go solar system with two lights and a USB charger costs $0.22 a day, similar to what many rural households currently spend on flashlight batteries, kerosene or candles.

Four technological innovations have come together to enable the rise of pay-as-you-go solar. First, rapidly falling costs for solar PV modules and batteries have made the equipment more affordable. Solar PV module costs have dropped by 90% since 2009, reports the International Renewable Energy Agency, making solar accessible to a far greater number of customers than ever before.

The third innovation is the rise of mobile money services such as M-Pesa, where customers can transfer small amounts of money via their mobile phones. This enables easy, remote payments from households that often do not have bank accounts, and makes a pay-as-you-go approach possible for rural consumers.

The final innovation is remote lock-out technology. This means that solar systems only generate power if payments are kept up to date. It may seem ironic that a technology that blocks rather than generates power is so important to energy access, but this functionality has become the secret ingredient to make the pay-as-you-go business model work.

The impact of off-grid solar on the lives of its customers cannot be overstated. Off-grid solar users report experiencing an improved quality of life, including feeling safer and healthier, having better access to communications, and with longer hours of lighting providing increased time for study or economic activities.

The impact of the pandemic

However, Covid-19 has interrupted the positive growth story of off-grid solar and created an unfortunate confluence of factors that threatens the future of the industry.

The economic consequences of the pandemic are not distributed evenly and are particularly severe for low-income communities in developing countries. For the first time in decades, the number of people living in extreme poverty is rising: the World Bank estimates an additional 88–110 million people will be forced into extreme poverty this year.

This loss of income for poor households in developing countries is triggering a crisis in energy access. The number of people in sub-Saharan Africa without access to electricity could rise by 13 million in 2020, says the International Energy Agency – the first rise in eight years.

The fall in income for poor energy consumers cascades into vanishing revenues for off-grid solar companies as their customers struggle to make repayments.

The rise in poverty – combined with Covid-related restrictions on business activities – is also reducing sales of off-grid solar. After seeing annual growth rates of over 30% a year, sales of solar home systems fell by 26% in the first half of 2020. Two-thirds of companies report that sales of energy access products have fallen by more than 25% compared with last year, and nearly a fifth experienced a drop of more than 75%.

To make matters worse, some international donors that have supported energy access are either reducing development spending or refocusing on the immediate Covid response instead of energy.

All this means that many off-grid solar companies are at risk of going out of business. A survey in July of 600 energy access companies found that 85% were concerned about their ability to last until the end of the year. While larger international companies with strong financial backing will be able to weather the storm, local companies will be particularly badly affected.

The future of the off-grid solar sector is now unclear. Small-scale off-grid solar was in some respects always going to be a temporary market – filling in the gaps left by the slow growth in grid connections. As incomes rise, centralised grids, mini-grids and larger solar installations will be needed to meet more complex energy needs than can be provided through simple solar home systems.

However, grid expansion can take decades, and energy needs are immediate. With energy access shrinking in the wake of the pandemic, the damage to the sector is a real cause for concern.

If the sector can get past the immediate impacts of the pandemic, however, it will play an important role in the post-pandemic recovery, supporting healthcare, creating jobs and enabling wider economic activity.

In the near term, there is an urgent need for a programme to provide off-grid solar and refrigeration to rural health clinics, which often lack reliable electricity. The efforts to secure access to vaccines for the world’s poorest countries will be wasted if they cannot be stored properly.

As developing countries rebuild from the economic shock, the off-grid solar sector can be an important source of employment. As of 2019, it supported 370,000 jobs, and – before Covid hit – this was expected to grow to 1.3 million jobs by 2022. The majority of these jobs are in rural areas, supporting employment in disadvantaged communities.

For the off-grid solar sector to contribute to the post-Covid recovery, it first has to survive. International institutions and donors can help avert the immediate crisis by repurposing existing energy programmes to focus on the simple aim of keeping the off-grid sector going – and inject more capital if existing programmes are not enough.

Developing country governments have a critical role to play in supporting the survival of the sector, which often gets less attention than grid-connected generation in national energy strategies, even where it reaches large numbers of consumers. Unnecessary hurdles limit the sector’s growth. In Mozambique, customs and duties can add 40% to the cost of imported equipment, meaning fewer households can afford even the most basic solar home systems. In Kenya, VAT was reimposed on off-grid solar products earlier this year as the government sought to make up for a shortfall in revenues triggered by the pandemic.

Governments, international institutions and development organisations are beginning to design post-Covid economic recovery programmes, often with commitments to build back better. A combination of targeted financial and policy support for off-grid solar in these programmes can help ensure the off-grid solar sector not only survives but thrives – and delivers improved and clean energy access, more economic opportunities and better health for millions more people.