In attempts to secure continued investment and remain relevant, companies in the US fossil fuel industry are campaigning for greater support for hydrogen made from fossil fuels, says a report by the non-profit environmental law organisation Earthjustice. 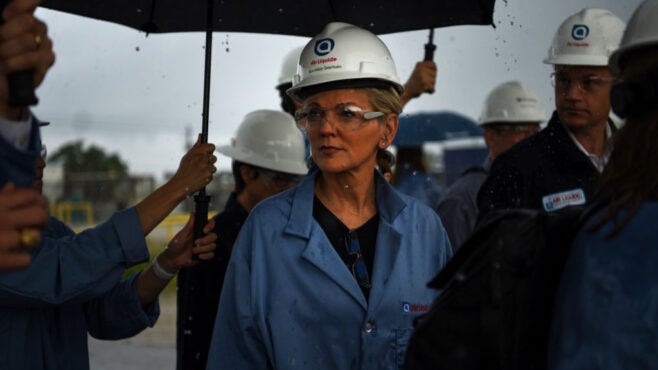 US Energy Secretary Jennifer Granholm during a tour of the Air Liquide hydrogen plant in Texas in May 2021. Granholm called hydrogen “a huge opportunity” for the oil and gas sector to reduce greenhouse gas emissions. (Photo by Callaghan O’Hare/Bloomberg via Getty Images)

Of the ten million metric tonnes of hydrogen produced annually in the US, 99.8% comes from fossil fuels. Much of the “hydrogen hype” comes from the oil and gas industry, the report says.

Blue hydrogen, produced from fossil fuels with carbon capture, is not compatible with a zero-emissions future, the report adds.

In the EU, the hydrogen lobby has spent almost €60m ($70.48m) convincing the European Commission to pursue a “hydrogen backbone”, which would see small amounts of hydrogen blended into the existing gas system, with a view to its eventual expansion or retrofit. Appliances designed for natural gas cannot safely burn pure hydrogen, the report highlights.

The report urges policymakers to support green hydrogen only, and prioritise the direct use of renewable electricity wherever possible, particularly in relation to vehicles, household appliances and other sectors with readily available electric options.