Europe has an immense opportunity at its fingertips. More than 12,000 terawatt hours (TWh) of solar electricity could be generated by 2050, shows SolarPower Europe’s 100% Renewable Europe study. This amount would supply more than 60% of Europe’s future energy demand and drive the successful decarbonisation of key sectors of the economy. As well as direct electrification, solar electricity can be used to produce renewable hydrogen to clean up sectors that will be difficult to fully electrify. 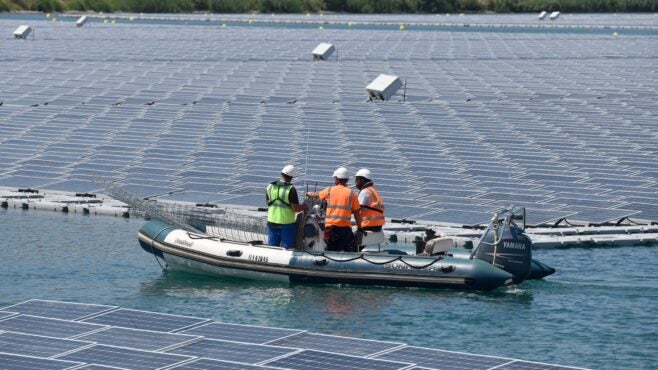 Technicians use an inflatable boat to work on photovoltaic solar panels in Piolenc, southern France, at the first floating solar energy farm of its size in Europe. (Photo by Gerard Julien/AFP via Getty Images)

For the most part, the most efficient route to decarbonisation is via direct electrification. However, this solution could be difficult for hard-to-abate sectors such as chemicals, parts of heavy industry, long-haul heavy-duty road transport, aviation and shipping. In these sectors, renewable hydrogen must play a role. This conclusion opens a significant market opportunity for solar in Europe.

Hydrogen produced via electrolysis powered by renewable electricity is acknowledged by the European Commission’s hydrogen strategy as the most sustainable solution. When this hydrogen is made in Europe, it increases European energy independence. When produced by grid-connected renewables, it offers new opportunities to support flexibility in the energy system and develop seasonal storage.

The demand for hydrogen in Europe is already here. Europe uses more than 300TWh of hydrogen, although much of it is fossil-based, mainly in refineries and to produce ammonia. Demand is clear with Germany, France, Spain, the Netherlands and other EU countries all publishing national hydrogen strategies. Europe leads the world with its reputation for producing the highest-quality, most reliable electrolysers.

A recipe to turn renewable hydrogen into reality

Around 50–60% of global hydrogen start-ups are based in Europe, shows a Material Economics white paper, commissioned by Bill Gates’s Breakthrough Energy. This study also explores what Europe can do to accelerate the growth of hydrogen and, in particular, renewable energy-based (or green) hydrogen. It estimates that if renewable hydrogen costs come down to a feasible €1.7–2 a kilogram (from €4–5 today) and companies continue to set ambitious climate targets at the same pace as over the last five years, the potential demand for hydrogen could go up to 1,400TWh.

As well as direct electrification, solar electricity can be used to produce renewable hydrogen to clean up sectors that will be difficult to fully electrify.

Renewable hydrogen costs are expected to come down thanks to economies of scale and learning effects, and as more companies adopt stricter climate targets and clean policy designs.

Structures need to be put in place to quickly scale up this promising industry to meet the growing demand for renewable hydrogen ‘made in Europe’.

SolarPower Europe has developed recommendations to accelerate the decarbonisation of the European economy, supporting the introduction of a minimum share or quota for renewable fuels, including renewable hydrogen, in hard-to-abate sectors.

To achieve the European Green Deal, the EU Renewable Energy Directive (RED II) is being revised to ensure renewable energy fully contributes to achieving higher EU climate ambitions for 2030 and 2050. RED II could introduce dedicated support mechanisms enabling the uptake of renewable fuels, such as renewable hydrogen, upstream and downstream.

Downstream, direct investment support to industrial users can support the adaptation of industrial processes needed to switch to renewable hydrogen.

Another important driver for achieving the renewable hydrogen revolution will be rolling out the right electricity and hydrogen infrastructure. In the short-term, while renewable-based hydrogen solutions are scaling up production, Europe must prioritise the rapid modernisation of its electricity grids and streamline investments into hydrogen infrastructure. This approach should include a focus on local production and use of renewable hydrogen to meet specific needs from hard-to-abate sectors.

Renewable hydrogen has quickly emerged as key to unlocking the full decarbonisation of Europe, as well as delivering a sustainable and job-intensive green recovery. To produce renewable hydrogen at the desired scale by 2030, renewable installations will have to grow massively, along with a significant scale-up of electrolysers. As the most cost-competitive electricity source in history, the solar sector is ready to contribute to making Europe a world leader in renewable hydrogen.