At the beginning of July, the 13,000 residents of Kankaanpää, a remote town in south-west Finland, bore witness to what could be an important landmark in the global search for year-round green energy. At the Vatajankoski power plant, Finnish cleantech company Polar Night Energy (PNE) installed the world’s first “sand battery”, a thermal energy storage facility that can store clean energy for months at a time.

The high-tech storage tank essentially uses cheap electricity from solar and wind to heat up sand, which then stores the heat at around 500°C, which can be used to warm local buildings in the winter months when energy is at its most costly.

By chance, at almost exactly the same time, 1,500km to the south, the bleary-eyed hipsters of Berlin were witnessing an almost identical landmark: Swedish utility Vattenfall began filling up a 45m-high, 200MW thermal energy facility with 56 million litres of water, which will be heated at 98°C and employed to heat the city as part of Vattenfall’s existing Reuter West combined heat and power plant.

The inauguration of these facilities heralds a coming-of-age for the burgeoning thermal storage industry – just one of a number of energy storage solutions that are both competing and collaborating to play an essential and underplayed role in the clean energy transition: serving as a backstop for the variability of wind and solar power. 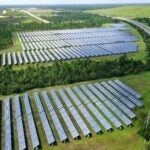 Energy storage
Weekly data: The Inflation Reduction Act and the coming revolution to US energy systems
Data Insights
View All

Having woken up to the havoc fossil fuels are reaping on the climate, the world is scrambling to switch to low-carbon sources of energy as fast as the economic tanker can turn. The best candidates to fill the vacuum are wind and solar, but despite the vast strides both have made over recent years in terms of cost and performance, a fundamental problem remains: the wind does not always blow, nor the sun always shine. A power grid that relies on these fluctuating resources will struggle to constantly match supply and demand, and renewable energy will often be wasted because it is produced when it is not needed.

One of the main solutions to this pesky conundrum is long-duration energy storage (LDES) technologies. These work by accumulating energy when supply exceeds demand – on a particularly sunny or windy day, for example – and dispensing it in the opposite scenario, such as at night or in winter.

“​​​​LDES is any technology that can be deployed to store energy for prolonged periods and that can be scaled up to sustain electricity or heat provision, for multiple hours, days or even weeks, and has the potential to significantly contribute to the decarbonisation of the economy,” explains Godart van Gendt, a senior expert in McKinsey's Sustainability and Electric Power & Natural Gas practices. “Energy storage can be achieved through very different approaches, including mechanical, thermal, electrochemical or chemical storage.”

Of the world's current LDES capacity, 94% derives from pumped hydro dams, which move water between two reservoirs through a pump or turbine to store or produce power. However, many believe there are limits to how much more pumped hydro can be installed globally due to its geographical requirements, particularly in less mountainous countries.

The thermal energy storage technology used in the Berlin and Kankaanpää pilot projects works by turning electricity into heat using a heat pump, which is then stored in a hot material such as water or sand inside an insulated tank. When required, the heat is distributed for heating purposes or turned back into electricity using a heat engine. The latter conversions are done with thermodynamic cycles, the same physical principles used to run refrigerators, car engines or thermal power plants.

“The heating can be done using different energy sources such as electricity, hydrogen or waste heat,” adds van Gendt. “In the context of energy system decarbonisation, we most often consider using excess renewable electricity, but the spectrum of relevant solutions is much broader.”

In Kankaanpää, PNE says its facility will keep sand at 500°C for several months. When energy prices are higher, the facility will dispense hot air to warm water for the district heating system, which is then pumped around local homes, offices and even a swimming pool.

In Berlin, once opened in 2023, Vattenfall’s tower will feed its hot water directly into the district heating network. The facility will also integrate heat from other industrial processes such as the city’s cleaning department or heat from wastewater. Equipped with a maximum thermal output of 200MW that can discharge for up to 13 hours, the tank could potentially also connect with other renewable heat sources such as a large-scale heat pump.

When compared with other LDES technologies, thermal storage has several things going for it. Firstly, the conversion process relies on conventional components, such as heat exchangers and compressors, that are already widely used in the power and processing industries, meaning the facilities are easier and quicker to build than many alternatives.

The storage tanks themselves can be filled by a variety of abundant and cheap materials such as gravel, molten salts, water or sand, which, unlike battery materials, pose no danger to the environment.

Thermal storage plants can also be deployed anywhere and can be scaled up to meet the grid’s storage requirements. Other LDES technologies are limited to specific geographies: pumped hydro requires mountains and valleys able to hold vast reservoirs, and compressed air energy storage is dependent on large subterranean caverns. Thermal storage also has a greater energy density (the amount of energy stored in a given volume) than pumped hydro: for example, 1kg of water stored at 100°C can provide ten times the electricity of 1kg of water stored at a height of 500m in a pumped hydro facility. This means less space is required for a thermal facility, reducing its environmental footprint.

The technology is long-lasting, with its components able to function effectively for decades without replacement. Batteries, on the other hand, degrade over time and may need to be replaced. Finally, the cost of thermal storage appears to compare favourably with other storage technologies, although this will not be known for certain until the technology matures and becomes fully commercialised.

However, thermal storage does have drawbacks. Even though the technology’s efficiency – how much the charged electricity is returned during the discharge – is high when used for heating, at around 95%, it drops to a relatively modest 50–70% when converted to electricity. This compares with 80–90% for lithium-ion batteries or 70–85% for pumped hydro. Also, to realise the benefits of the technology and have relatively high-efficiency systems, investors and project developers need to commit to relatively large upfront capital expenses, which can be a hard sell since many of these technologies are still in the R&D and demonstration stages.

“Batteries are probably the most cost-effective storage solution for up to a few hours of discharge duration, then thermal storage would be competitive between several hours and a couple of days, and pumped hydro – and perhaps even hydrogen in the future – would be best for anything longer than that,” says Pau Farrés, a cleantech analyst focused on LDES at Future Cleantech Architects.

Even within the realms of thermal storage, there are a seemingly endless variety of materials that can be used to store the heat, each with their niche applications. “If you're designing the system just to provide domestic heat, you normally use hot water,” says Farrés. “But if you want to provide electricity, then you normally have to go for higher temperature systems that require different materials – a common one is molten salts. These systems are usually designed to provide either electricity or heat, but there are specific applications in which they can be tailored to provide both.”

Molten nitrate solar salt has a narrow temperature range (it solidifies below 220°C and begins to decompose around 620°C), and a moderate cost on the order of $600-1000/ton. “It also requires two-tank containment (i.e. twice the volume) and is challenged by salt corrosion,” says Patrick Davenport, a researcher in the Thermal Systems R&D Group at the US’ National Renewable Energy Laboratory (NREL). On the other hand, sand can have a wide stability range of between -20°C and 1000°C and costs less than $100/ton. “It has poor heat transfer which helps keep the system insulated, but may require movement of particles through a heat exchanger for larger systems,” caveats Davenport.

Other options include latent-heat phase change materials, thermochemical energy storage, concrete blocks or rock/earthen beds. However, each has its own idiosyncratic challenges such as limited temperature range, high storage cost, poor thermal responsiveness or stability concerns – and each has their appropriate application.

“When we think of thermal storage, the main question we should be asking is what temperatures it can deliver,” says van Gendt. “Typical industrial applications require a few hundred degrees Celsius, and many basic processes, such as production of cement or steel, require temperatures well above 1,000 degrees. The good news is that thermal storage can deliver that, and the technology is already available.”

A key part of net zero

As proven by Vattenfall’s and PNE’s recent feats, thermal storage is emerging from the R&D stage and is finding its feet commercially. In another recent example, Israel’s Brenmiller Energy is replacing gas boilers in a food and tobacco production facility with an 18.5MW/31.5MWh thermal storage system to cover 100% of its steam requirements – demonstrating how the technology can be applied as a viable, large-scale alternative to fossil fuels.

The key players in the heating segment of the thermal storage market include PNE, Germany’s Kraftblock and EnergyNest of Norway. On the electricity side, there is healthy competition, with Airthium (France), Antora (US), Azelio (Sweden), Cheesecake Energy (UK), Echogen (US), EnergyDome (Italy), Highview Power (UK), Malta (US), Siemens Gamesa's ETES (Germany), Stiesdal (Denmark) and Stolect (France) represented.

“Thermal storage is likely to have a very important role to play in the net-zero transition,” says Davenport. “For countries to reach 100% renewable grid electricity, we need stable, distributed LDES systems to begin to displace base-load generators like coal and gas-fired power plants. But then we still have other sectors not included in that grid electricity, like the transportation and industrial sectors. Thermal storage may not lend itself well to transportation, but is very suitable for implementation in industrial processes where the end-goal is often heat."

​​Heat is responsible for around 50% of global final energy demand – split roughly in half between industry and buildings. Most of that heat is currently delivered by fossil fuels. As decarbonisation accelerates, fossil fuel for heating will need to be replaced with renewable energy, and “the portion of heat demand that is not coincident with renewable supply will require storage”, says van Gendt.

For Antoine Koen, a cleantech analyst colleague of Farrés at Future Cleantech Architects, thermal storage will play its role in net zero but as a contributing part of the full cast of LDES solutions required to achieve what is a herculean undertaking. “The thermal storage field will develop and the diversity of technological variants will probably shrink and consolidate. But in the wider energy storage field, each technology will have its niche role to play according to its strengths and weaknesses, which will steadily become more apparent as the market matures.”