Estimating the emissions savings associated with electrification is complex. A number of analysts have made admirable attempts to appraise emissions savings resulting from a shift to electric vehicles (EVs) from internal combustion engine vehicles or to electric heat pumps from gas condensing boilers. These studies show electrification leads to significant reductions in carbon emissions.

This decrease is due to the combined effect of much greater efficiency, resulting in significantly lower total energy demand, and the fact that the electricity mix is much cleaner than it was 20 years ago and is getting cleaner every year.

In recent weeks however, several media articles have surfaced arguing against the electrification of end uses currently reliant on combusting fossil fuels. The German media reported widely on research claiming electric cars that run on power generated by coal are no cleaner than petrol and diesel cars. In the UK, gas industry representatives have argued heat pumps use more gas than burning the fuel directly in a gas boiler. Both claims are false and misleading, delaying the energy transition. 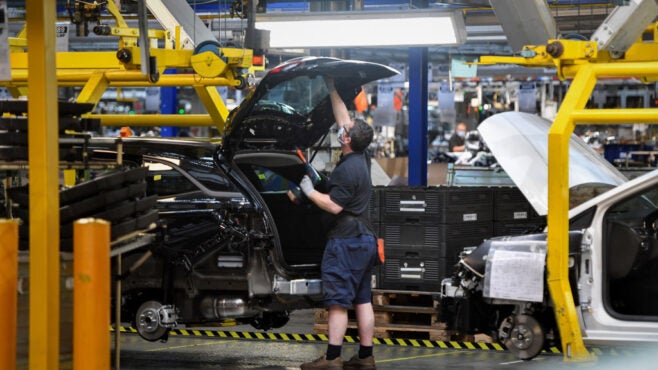 A production line in Vauxhall’s Ellesmere Port plant in the UK, where new electric vehicles will be built. (Photo by Anthony Devlin/Getty Images for Vauxhall)

The insanity of flaring during a global gas crisis

These arguments do not stack up and prolong the combustion of fossil fuels.

First, in the electricity sector, together with heavy industry and aviation in the EU and the UK, carbon emissions are capped by emissions trading systems, which limit the volume of carbon emissions released. As a result, an additional electric heat pump or electric car, even if powered by a gas plant at the margin of the merit order, will not change total emissions from these sectors, at least not in the short term.

Any investment in new electricity supplies will have to be at least as clean as the current supply mix and, since the cap ratchets steadily down in line with climate targets, new resources will have to be almost exclusively zero-carbon generation.
The only primary energy resources that are increasing their share in the energy mix, moreover, and are projected to continue to do so, are zero-carbon resources.

This trend is vital for the cap on emissions to be reduced at the pace needed to meet the EU’s goal of climate neutrality, as set out in the European Green Deal. Adding renewables faster will also help reduce surplus emissions through the Market Stability Reserve, a mechanism that automatically removes emissions permits if emissions fall faster than anticipated.

It is clear the numbers of EVs and heat pumps will only increase faster going forward to meet the goals of the European Green Deal and national targets, but the additional electricity demand this creates is still more than compensated for by growing renewable generation. In 2020, the EU generated 73 terrawatt hours (TWh) more renewable electricity than in 2019. At this rate, it will reach 730TWh a year by 2030.

To meet the EU's 55% emission reduction goals by 2030, the deployment rate will need to increase even further and the European Commission has just announced an increase in the renewable energy target from 32% to 40% in 2030. Compared with that, the International Energy Agency (IEA) believes EVs in Europe may consume between 110 and 187TWh in 2030 if deployed in line with climate goals.

Third, EV charging and heat pumps can be scheduled to run at times of high renewable electricity generation. Preheating homes overnight when there is a lot of offshore wind on the system is one way of minimising fossil generation. Studies have shown that heat pump operation and offshore wind generation coincide well.

EVs can be charged during the day, before peak hours, when there is a lot of solar generation. The flexibility of new electric loads such as EVs and heat pumps can be used to help integrate an increasing share of renewable energy and provide an opportunity to deploy renewables faster and further.

Arguments deployed against electrification on the grounds of carbon emissions do not add up.

Finally, attributing emissions to certain end uses such as electric cars and heat pumps but not to others is not credible. As Professor Martin Doppelbauer from the Karlsruhe Institute of Technology in Germany points out, the same argument would have to apply to all consumers newly connected to the electricity grid, provided there are alternative, non-electric technologies, because they also cause avoidable additional electricity consumption.

Buying an induction hob, electric underfloor heating, a new light bulb and an electric lawn mower all classify as new end uses – and all existing electric appliances were at some point new. It is impossible to determine at what point these end uses are no longer served by marginal generation.

The result of all this is that the arguments deployed against electrification on the grounds of carbon emissions do not add up. All scenarios modelled by the likes of the IEA at international level and reviews of European studies by the JRC agree electrification is a key pillar for decarbonisation, as it allows the direct use of renewable electricity. Being distracted by arguments on the basis of indefensible assumptions is counterproductive. Policymakers can better serve climate goals by rolling out heat pumps and EVs now.

Topics in this article: CCS and CCUS, EU