When Kristian Ruby was hired by European electricity association Eurelectric in 2017 as its new secretary general, it ruffled a few feathers. Rather than coming from a major electricity utility as secretary generals before him, Ruby came from the world of renewables and climate action.

Since joining Eurelectric, secretary general Kristian Ruby has worked to give the organisation, once known as a conservative voice protecting entrenched public utilities, a new focus pushing electrification as a climate solution – but are all members on board?

Energy Monitor spoke with Ruby about the challenges inherent in changing thinking in an old industry. 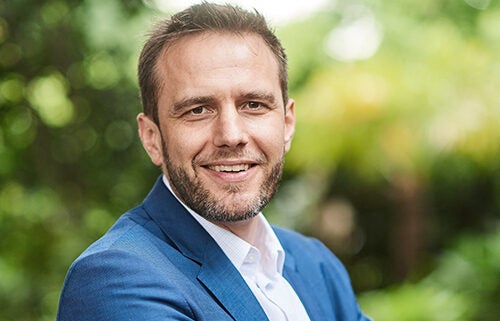 Eurelectric secretary general Kristian Ruby: “The reigniting of the economy needs to be green”. (Photo courtesy of Eurelectric)

Kristian Ruby: I have a fairly unusual background in the sense that I really came from the policy side. For seven years I worked in Danish ministries and the cabinet of [former climate action commissioner] Connie Hedegaard at the European Commission, then I joined Wind Europe as policy director, and a few years later became secretary general of Eurelectic.

For Eurelectric, I was an unusual choice because I came from outside the sector with a different policy background. Since I started my career, my focus has been to advance and accelerate the energy transition. My mandate at Eurelectric is to continue that, but instead of focusing on one single set of technologies in the power sector, I am looking at how to decarbonise the entire economy.

Eurelectric has a long history. How has it changed since it was founded?

Eurelectric came into being through a merger of two associations in 1989 – Unipede founded in 1925 and the international electricity union. Since then Eurelectic has undergone the same changes that have hit the industry. One major change was the liberalisation of the European power sector, which meant a move from representing vertically integrated national monopolies to embracing a fully market-driven approach to generation and selling electricity in Europe.

The other change has been the need for decarbonisation. Go back a few years and many [of our] positions were saying coal was needed in the electricity mix. Go back even further and you will find a sceptical approach to renewable energy. We are doing away with all that. The sector had already embraced the idea of a carbon-neutral sector in 2009, but we need to decarbonise faster – not because it is something we have to do but because it’s our raison d’etre to supply people with clean power.

Has it been easier to convince some members to come on this journey than others?

There has been a big difference among companies in their willingness and enthusiasm to embrace the energy transition and the clean power paradigm. A lot of it has to do with the nature of their assets. If you look at some countries they have the full national provision of electricity based on hydropower. For them it is easier. Other countries have been relying much more on coal, with it deeply entrenched in their economic tissue. For them it has been much more difficult.

To convince them, it was crucial people could see there is real potential with this electrification stuff, that we could provide more people with more electricity, which is a good deal for any business.

It was also important for us to advocate for a just transition, for policymakers to put up funds to help countries square the bill for decarbonising. I think we have been very successful with that. One year ago there was no Just Transition Fund and zero euros allocated for that purpose. Now we have heads of state and government embracing a €17m fund for the just transition.

How can electrification help the fight against climate change?

Two decades ago, electricity was as dirty as any other type of energy. Why would you shift from coal and oil to electricity? It didn’t make sense. Now we have one energy carrier that is far cleaner than any other. We just had the latest figures from the European Commission from the second half of 2020. More than 40% of electricity came from renewables. On top of that you can add the clean power from nuclear, which brings us to a share of 65% carbon-free electricity. No other carrier is at that low level of carbon intensity.

So now, switching from other energy carriers to electricity brings an immediate benefit. On top of that it often comes with efficiency gains, so you get cleaner and more efficient at the same time. Why? Because electric technologies such as electric vehicles or heat pumps are way more efficient that their traditional rivals. If you switch from a combustion engine to an electric vehicle today, regardless of the country where you shift, you are going to have a smaller carbon footprint. Because of efficiency, you have made it cleaner, even in the most carbon-intensive energy mixes.

How has power sector been affected by the Covid-19 crisis?

Significantly, but not as much as other industries. What was really stalled during lockdown was transport, and transport is still largely based on fossil fuels – oil companies are coming out with bleeding balance sheets, while electricity companies are showing much more resilience. We even have some companies coming out with modest profits.

Overall, electricity consumption took a hit of around 10% in Europe during lockdowns, but that has been very unevenly distributed. In southern Europe, Spain and Italy went down 30–40% at certain times, whereas in other countries it was slightly more stable.

We have seen some companies become generally more reluctant to invest as a consequence of this, especially the ones who have their portfolios exposed to a lot of merchant risk. Our main thing is to say ‘build back better’. The reigniting of the economy needs to be green.

Topics in this article: Interview