The pandemic changed many aspects of our lives, one of them being the way we shop, leading to a boom in e-commerce. We are having things delivered to our homes like never before, which has spurred concerns about the intense emissions from this activity. By some estimates, between 20% and 30% of a city’s CO2 emissions come from last-mile deliveries from warehouse to home. According to a recent study by consultancy McKinsey, without greening logistics, this growth in e-commerce could lead to a 25% increase in CO2 emissions in some city centres by 2030.

There is a way to avoid this – electrifying the delivery vehicle fleet. Energy Monitor spoke to Peter Harris, vice-president for international sustainability at U S-based global shipping and receiving giant U nited Parcel Service (U PS), about its efforts so far to electrify.

What does U PS’s vehicle fleet look like right now?

Transport
Covid-19: Sub-Saharan Africa has yet to realise its renewable potential 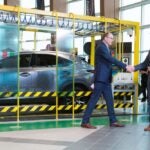 Globally, we have a vehicle fleet of 120,000 units. We are a U S company, so a big proportion of that is in the U S, but we operate in 220 countries around the world. More than 13,000 vehicles in that fleet are now on some form of alternative fuel.

The vehicle fleet is divided in two parts operationally, which has implications for the technology we are planning to use. The biggest proportion is for local collection and delivery – what we call ‘package cars’. These are the vehicles that do urban runs every day in cities all over the world.

A smaller proportion do ‘feeder runs’; these are big HGVs [heavy goods vehicles] that drive overnight and connect the cities together.

What is the carbon footprint of your delivery services and what steps has U PS taken to green its operations?

About 60% of our direct [scope 1 and 2] emissions are from our airline and 40% are from our ground operations. Of that, most are from the fleet, while 10% are from [depot] buildings.

We have a headline goal of becoming carbon neutral by 2050. In the meantime, we have a 2025 goal of 40% alternative [liquid] fuel and 25% renewable electricity in our facilities. By 2035, the goal is to have 30% sustainable aviation fuel (SAF) in our airline and a 50% improvement in carbon intensity per package moved.

How do we get there? Let’s start with the ground fleet. It’s the pick-up and delivery side that’s most amenable to electrification. We’re heading down the electrification route now for local collection and delivery. We have electric vehicles (EVs) in operation already and we recently reached an arrangement with a British start-up called Arrival . We’ve developed a new collection [electric] vehicle design with them, and we committed to putting up to 10,000 in our fleet subject to satisfactory testing, which is under way right now.

What challenges have you encountered in this transition to green logistics?

It’s not just about the truck; you have to be able to manage the power supply situation as well. Our [local delivery] operations cannot stop during the day to recharge; it needs to be done overnight. That imposes a heavy overnight power demand on our [depot] facilities, which in many cases they were not designed for. It’s potentially very expensive. So we’ve done a lot of work with partners [including U KPowerNetwork and Moixa under the EV Fleet-Centred Local Energy System project], with some government support, to develop smart charging technologies that reduce the costs of local power grid upgrades and reduce the cost of getting power to the vehicles on a day-to-day basis. All that gets us closer to the point where an EV will have a lower total cost than an equivalent diesel.

We’ve done a lot of work on this in central London where we’ve already scaled the EV fleet. What we initially found is when we tried to connect more than ten trucks overnight we hit the power capacity ceiling of the [depot] building. So we then conducted a partnership project [with Arrival ], with some government support, to overcome that limit.

Initially, we bought an upgrade [to the depot’s power system, in 2013]. That involved a lot of wiring and heavy kit. It was very expensive and very inflexible. You end up buying hardware that you cannot take with you if you move buildings. Sometimes it is outside the building, an asset that you don’t even own.

As we neared the new capacity limit, we did not want to repeat the unpleasant experience of that first upgrade. So we formed a partnership with technical partners and, with some government support, developed a smart grid technology that places a computer between the power supply and the vehicles. The computer manages the way power is drawn from the grid to optimise its use. We found we could treble the number of vehicles we could charge overnight without having to invest masses.

Now we’re thinking, we’ve got this computer: what if we use it not only to minimise the capital expenditure of upgrades but also to decide exactly when we buy power from the grid? As the grid shifts to renewable power, that power is intermittent, and that intermittency translates to price signals. We can benefit from purchasing power when it is cheapest, reducing capital and operating costs. It’s a double win.

This is all part of our journey to drive down the cost of EVs so they match or beat diesel. When we reach that point, electrifying is no longer about sustainability; it becomes a simple common sense commercial metric.

Much has been made of the potential of hydrogen in logistics. Is U PS looking at this?

We remain open-minded and agnostic about fuels; we believe in understanding and testing everything. We’ve been conducting some test work with hydrogen in the U S, where we did a test on package cars that started in April 2021. We also did some testing in LA with heavy units, trackers, overnight feeders. We’ve learned a lot from that.

There are some pluses and minuses to hydrogen. For a ground fleet, there is clearly an advantage in terms of fuelling time and range – it’s more energy dense compared to battery electric – but there is a big disadvantage because hydrogen fuel cells are inherently less efficient than battery electric [vehicles]. It does seem that from a pickup and delivery standpoint, pure electric has the lead right now and hydrogen is still a ways off, but we remain open-minded.

I do think hydrogen has great potential when you get into parts of our global asset base that you cannot reasonably electrify, like our airline and overseas shipping. We are moving into electric aircraft. We have drones, and electric aircraft are happening at the lighter aircraft end, but there is really no likelihood of electrification of aircraft reaching large-scale, long-range routes any time soon. That’s where hydrogen can step in. We’ve already seen indications from Airbus that they expect to have hydrogen aircraft in the sky by the mid-2030s. That could play an important role, but for long range we will continue to need SAF.

For ocean shipping, we do not own the ships but we use them. We have a U PS ocean product, which we offer to customers. When you look at ocean ships, which still use relatively pure conventional fuels, there is the potential there for hydrogen to play a role in the form of ammonia.

We have the package car fleet moving toward electrification. We cannot do that at the moment for our feeder routes, the HGVs. Batteries are not yet at the stage where that is feasible. Because we are not content to do nothing, we are developing a bridging solution, which will take us through the next ten to 20 years until we can deploy a zero-emissions solution. That bridging solution is 'renewable natural gas'. It’s a fascinating concept. Natural gas HGVs have been around for some time, like fossil natural gas. The beauty of renewable natural gas is that it comes from organic waste, which gives off methane, chemically the same as fossil gas. It has the benefit of giving approximately 80% reduction in well-to-wheel greenhouse gas emissions. We are today the industry’s largest user of renewable gas in the U S. We’re bringing that technology into Europe as well. I think there’s a lot of promise for this in the next ten to 20 years.

In aviation, biofuels will be extremely important, and SAF is part of our road map to the 2030 goal. When we look at the future of aviation, we see electric coming in at the lighter aircraft end, we see hydrogen feeding into mid-range, but I think SAF is realistically going to be needed at the long range end for a very long time, possibly forever. So it is really important that we get to a point where SAF is readily available. That’s not where we are now.

What do you need from policymakers to make green logistics happen?

The best thing governments can do is provide the right fiscal incentives and support mechanisms. All of these technologies go through a valley of death: there’s a period of time where they cannot stand on their own feet. Smart grid partnerships, like we had in the U K, have been a good example of how governments can step in and help.

The other thing governments can do is consciously remove roadblocks. It turns out the way power markets work in a lot of Europe is that the end user has to pay for the cost of upgrades all the way up the supply chain. This is a big disincentive for fleets to electrify, especially small fleets. We’ve been encouraging governments to think beyond that, to ways to democratise that cost.