In 2019, 15 US retail companies emitted 12.7 million metric tonnes of carbon dioxide (CO2) emissions, equivalent to 1.5 million US homes, by importing the majority of their goods on fossil fuel-powered ships, concludes a report from environmental organisations Stand.earth and Pacific Environment. 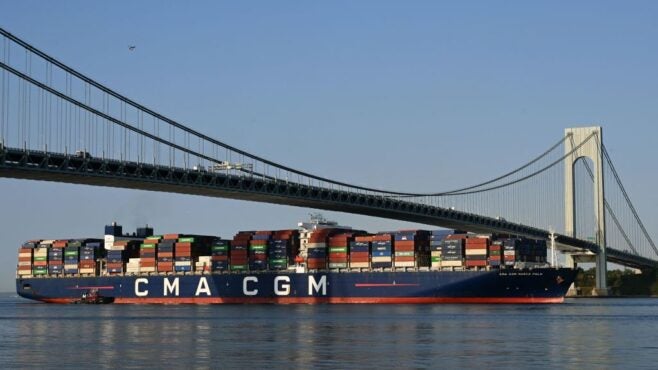 The CMA CGM Marco Polo passes under the Verrazzano-Narrows Bridge in New York, May 2021. (Photo by Timothy A. Clary/AFP via Getty Images).

Retail giants – including Walmart, Amazon and Ikea – should reduce maritime emissions by ensuring contracts with shippers require all products to travel on the cleanest ships. They should also commit to 100% zero-emission maritime supply chains by 2030, the report says.

To achieve a zero-emission shipping industry by 2030, the report calls for US policymakers to mandate climate and air emissions reductions for all ships that dock in US ports. They also want to see improved transparency in maritime emissions data via a mandated domestic monitoring, reporting and verification system.

Topics in this article: Trade