Around 70% of Canada’s goods exports are vulnerable to market disruption expected to arise from the energy transition, reveals a report from the Canadian Institute for Climate Choices, which assesses Canada’s economic prospects in a net-zero world. 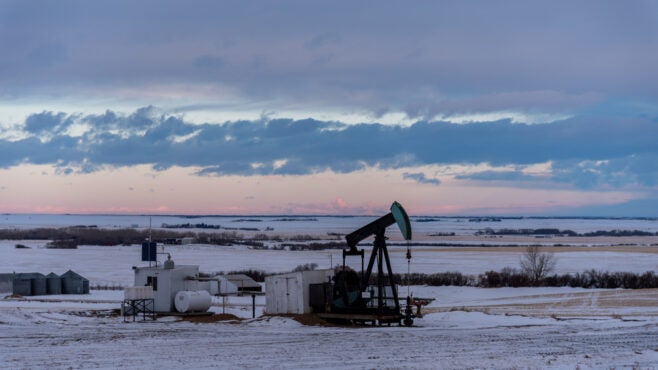 Oil pump on the prairies during winter in Alberta, Canada. Photo by Structured Vision via Shutterstock.com

Canada is a trade-dependent country with more than one-third of its GDP generated from exports. Without major investment, export industries such as oil and gas extraction, mining and metal manufacturing, will see significant profit loss over the next 20 years, the report states.

These transition-vulnerable sectors generated almost CA$300bn in export and investment value in 2019, and employed roughly 800,000 people across 50 communities.

Workers across every province will be affected, the report estimates. Alberta is particularly at risk: 9.1% of its workforce are directly employed in transition-vulnerable sectors.

The Climate Choices report calls on the Canadian Government to redirect support for activities such as coal mining and oil production towards areas such as clean hydrogen and renewables. Additionally, communities should establish transition plans to support economic diversification and address unemployment, it suggests.